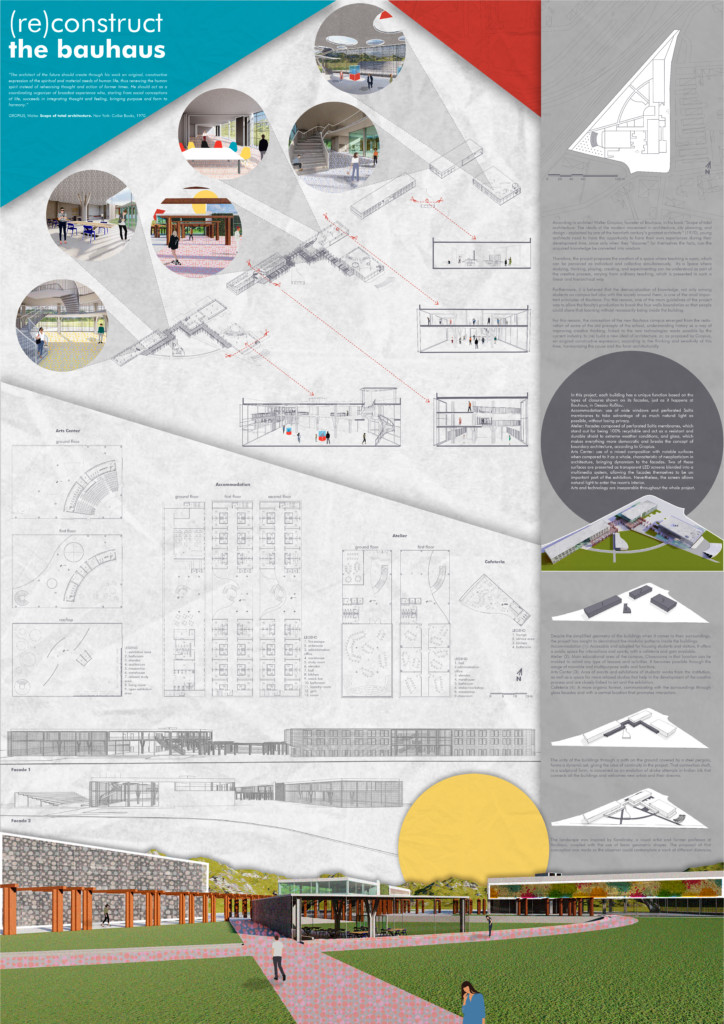 “The architect of the future should create through his work an original, constructive expression of the spiritual and material needs of human life, thus renewing the human spirit instead of rehearsing thought and action of former times. He should act as a coordinating organizer of broadest experience who, starting from social conceptions of life, succeeds in integrating thought and feeling, bringing purpose and form to harmony.”

According to architect Walter Gropius, founder of Bauhaus, in his book “Scope of total architecture: The ideals of the modern movement in architecture, city planning, and design – explained by one of the twentieth century’s greatest architects ” (1970), young architects need to have the opportunity to have their own experiences during their development time, since only when they “discover” for themselves the facts, can the acquired knowledge be converted into wisdom.

Therefore, the project proposes the creation of a space where teaching is open, which can be perceived as individual and collective simultaneously.  It’s a Space where studying, thinking, playing, creating, and experimenting can be understood as part of the creative process, varying from ordinary teaching, which is presented in such a linear and hierarchical way.

Furthermore, it is believed that the democratization of knowledge, not only among students on campus but also with the society around them, is one of the most important principles of Bauhaus. For this reason, one of the main guidelines of the project was to allow the faculty’s production to break the four walls boundaries so that people could share that learning without necessarily being inside the building.

For this reason, the conception of the new Bauhaus campus emerged from the restoration of some of the old precepts of the school, understanding history as a way of improving creative thinking, linked to the new technologies made possible by the current industry, to (re) build a new ideal of architecture, or, as proposed by Gropius, an original constructive expression, according to the thinking and sensitivity of this time, harmonizing the cause and the form architecturally.

In this project, each building has a unique function based on the types of closures shown on its facades, just as it happens at Bauhaus, in Dessau-Roßlau.

Accommodation: use of wide windows and perforated Soltis membranes to take advantage of as much natural light as possible, without losing privacy.

Atelier: facades composed of perforated Soltis membranes, which stand out for being 100% recyclable and act as a resistant and durable shield to extreme weather conditions, and glass, which makes everything more democratic and breaks the concept of boundary architecture, according to Gropius.

Arts Center: use of a mixed composition with notable surfaces when compared to it as a whole, characteristic of neoplasticism in architecture, bringing dynamism to the facades. Two of these surfaces are presented as transparent LED screens blended into a multimedia system, allowing the facades themselves to be an important part of the exhibition. Nevertheless, the screen allows natural light to enter the room’s interior.

Arts and technology are inseparable throughout the whole project.

Despite the simplified geometry of the buildings when it comes to their surroundings, the project has sought to deconstruct the modular patterns inside the buildings.

Accommodation (1): Accessible and adapted for housing students and visitors. It offers a public space for interactions and sports, with a cafeteria and gym available.

Atelier (2): Main educational area of the campus. Classrooms in that location can be molded to admit any type of lessons and activities. It becomes possible through the usage of movable and multipurpose walls and furniture.

Arts Center (3): Area of events and exhibitions of students’ works from the institution, as well as a space for more relaxed studies that help in the development of the creative process and are closely linked to art and the exhibition.

Cafeteria (4): A more organic format, communicating with the surroundings through glass facades and with a central location that promotes interaction.

The unity of the buildings through a path on the ground covered by a steel pergola, forms a dynamic set, giving the idea of continuity in the project. That connection shaft, in a sculptural form, is conceived as an evolution of stroke attempts in Indian ink that connects all the buildings and welcomes new artists and their dreams.

The landscape was inspired by Kandinsky, a visual artist and former professor at Bauhaus, coupled with the use of basic geometric shapes. The proposal of that conception was made so the observer could contemplate a work at different distances. 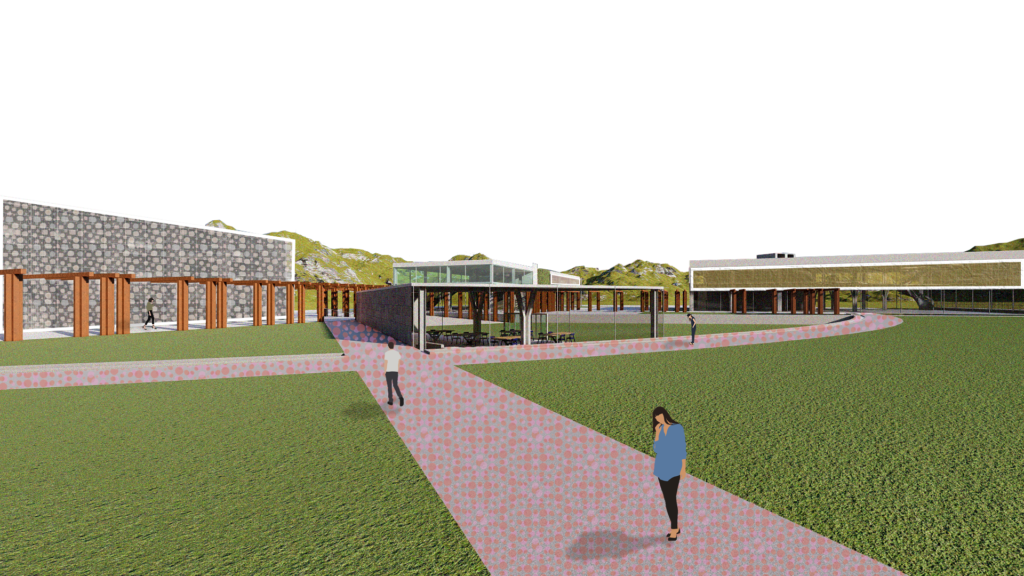 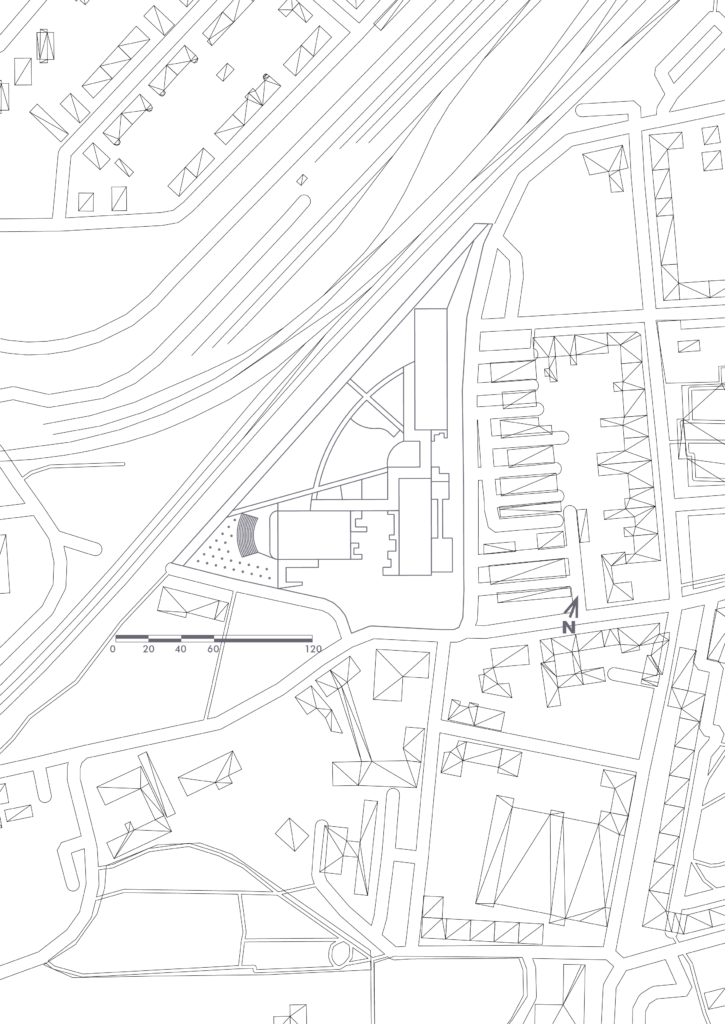 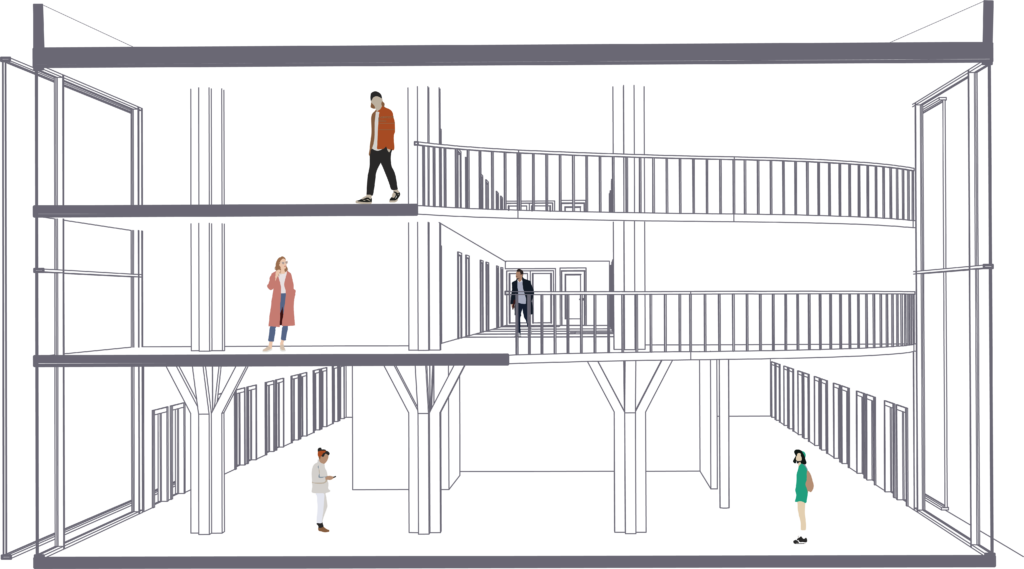 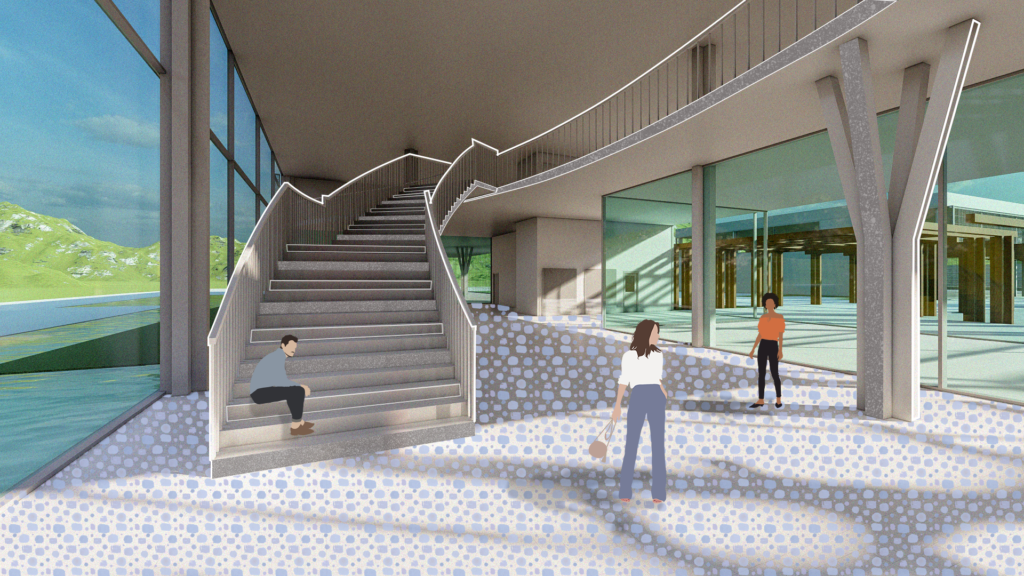 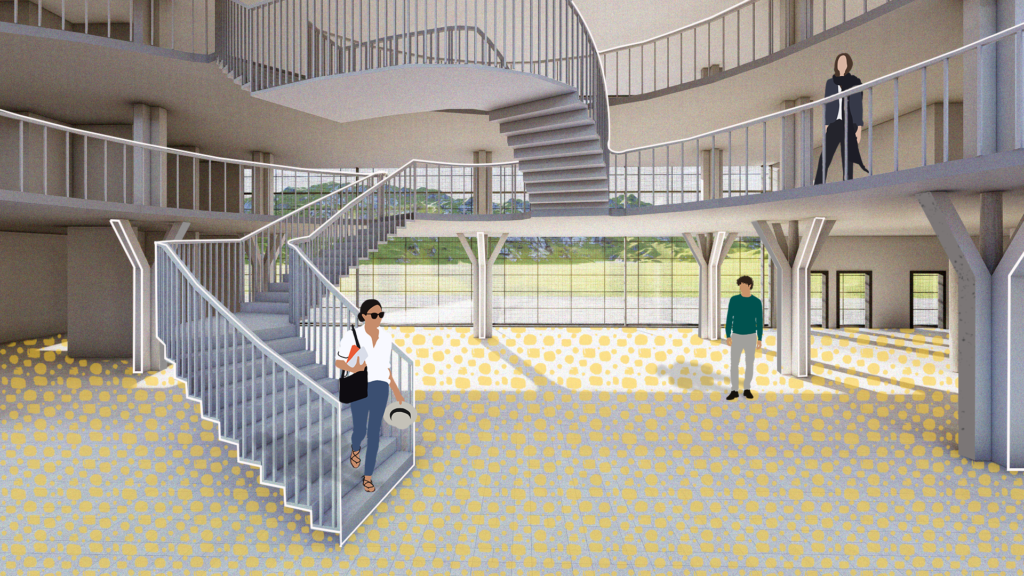 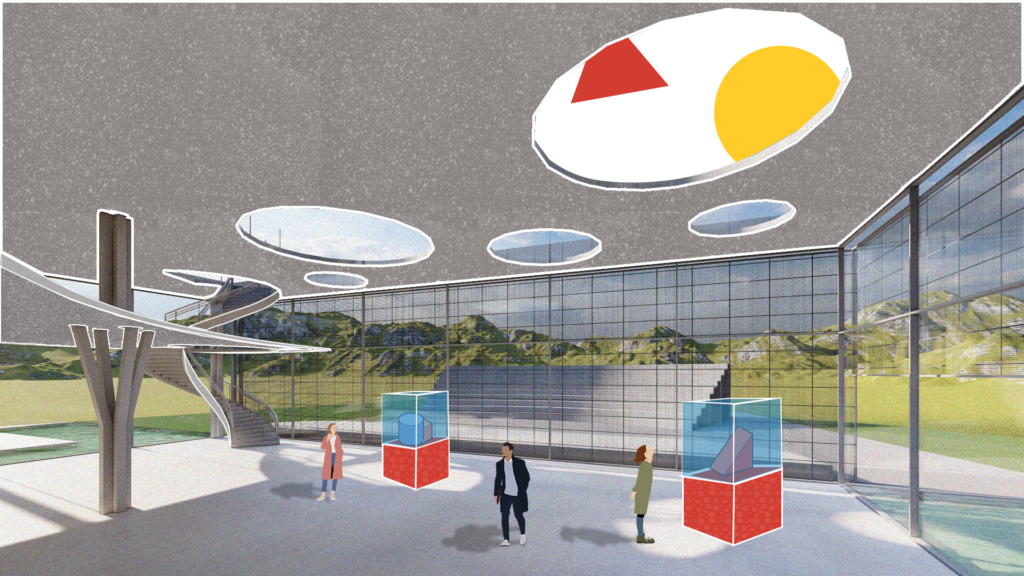 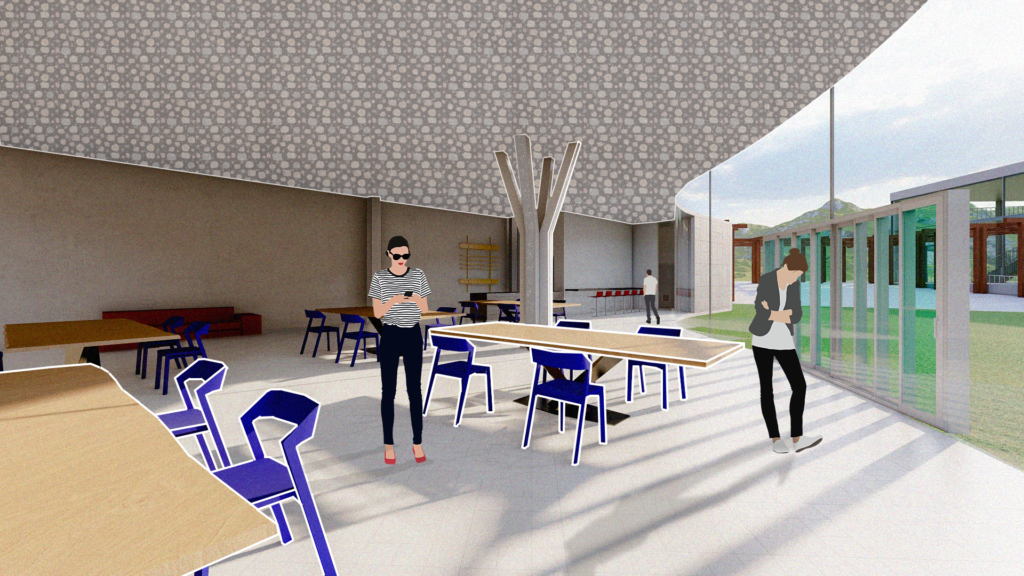 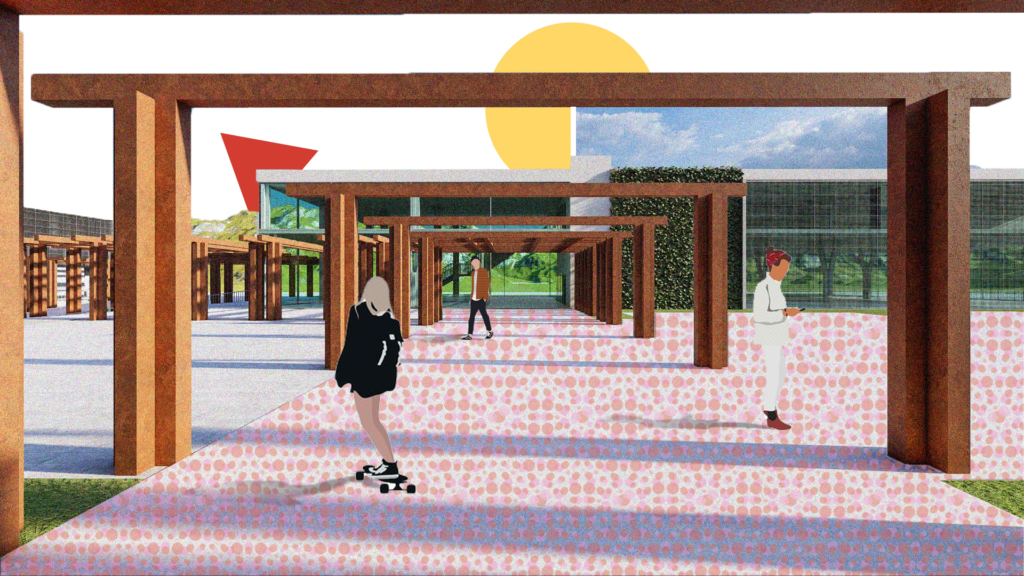 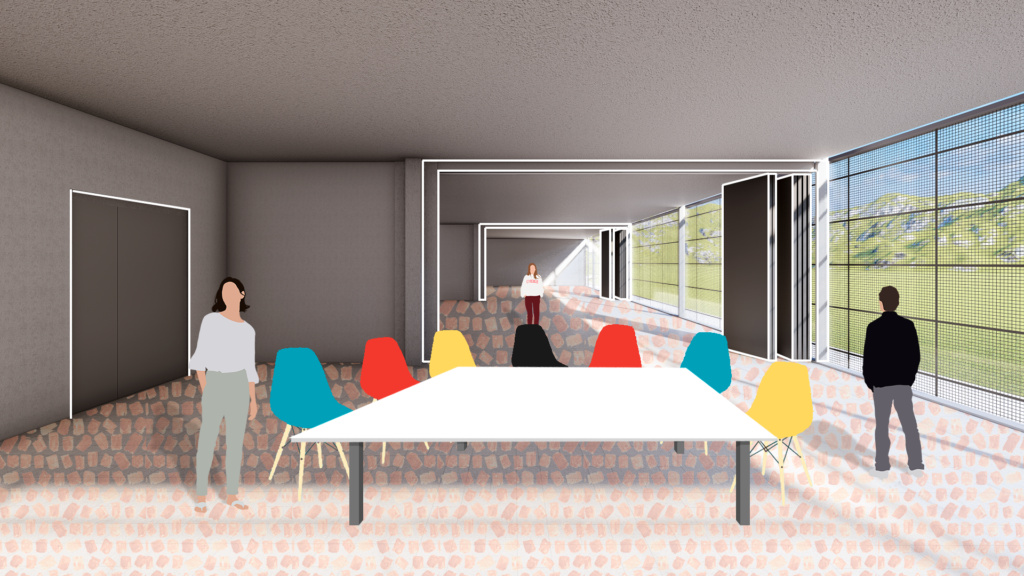 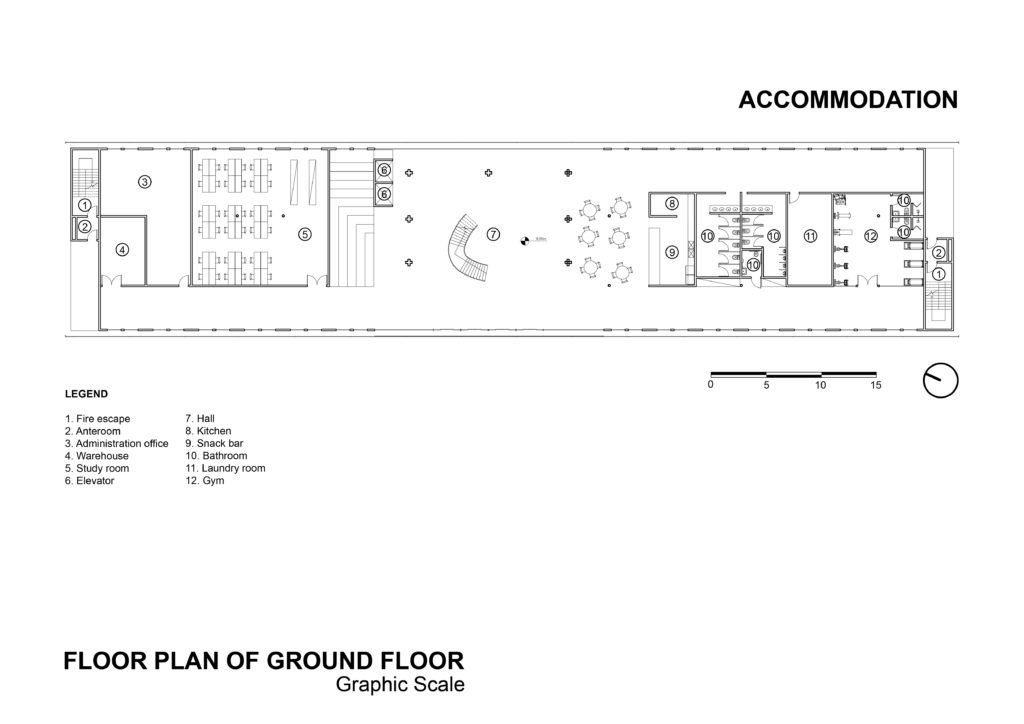 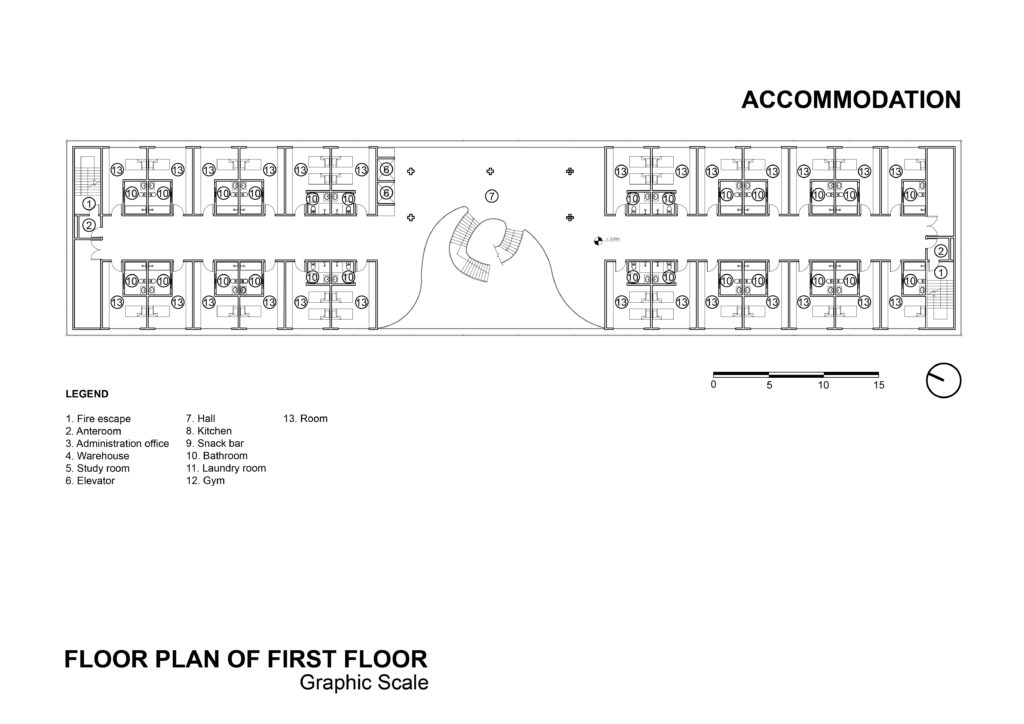 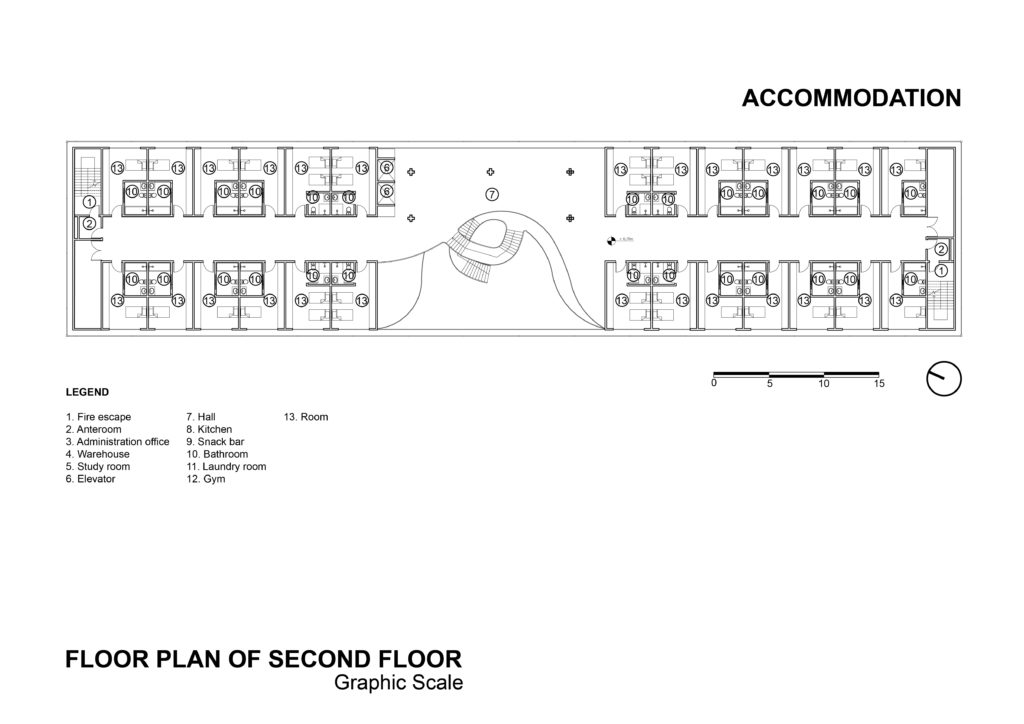 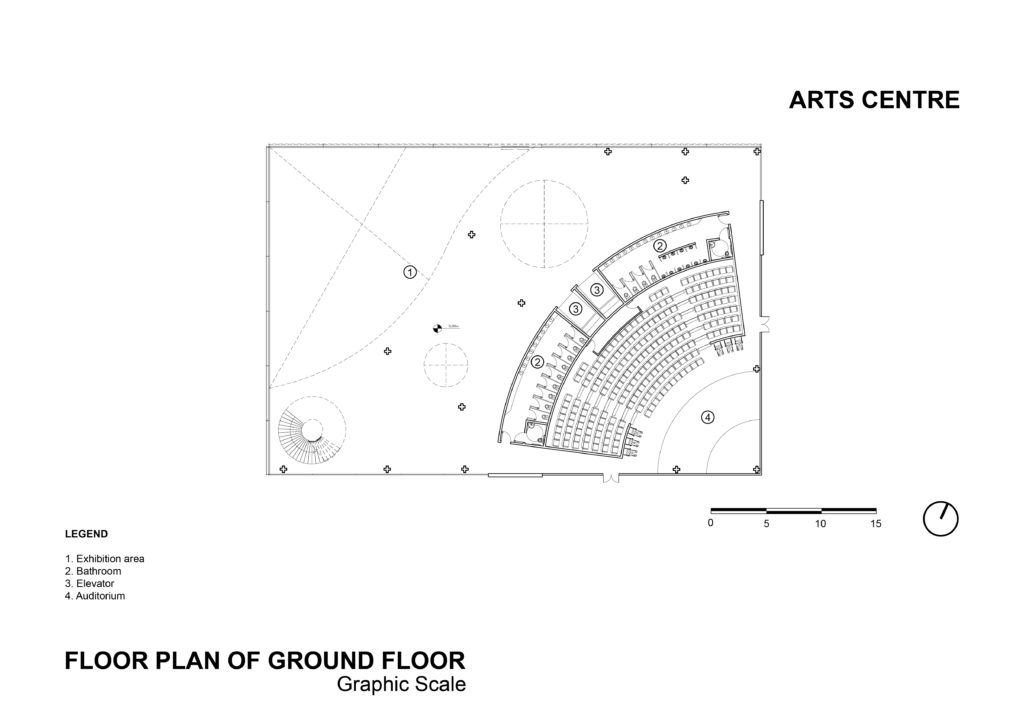 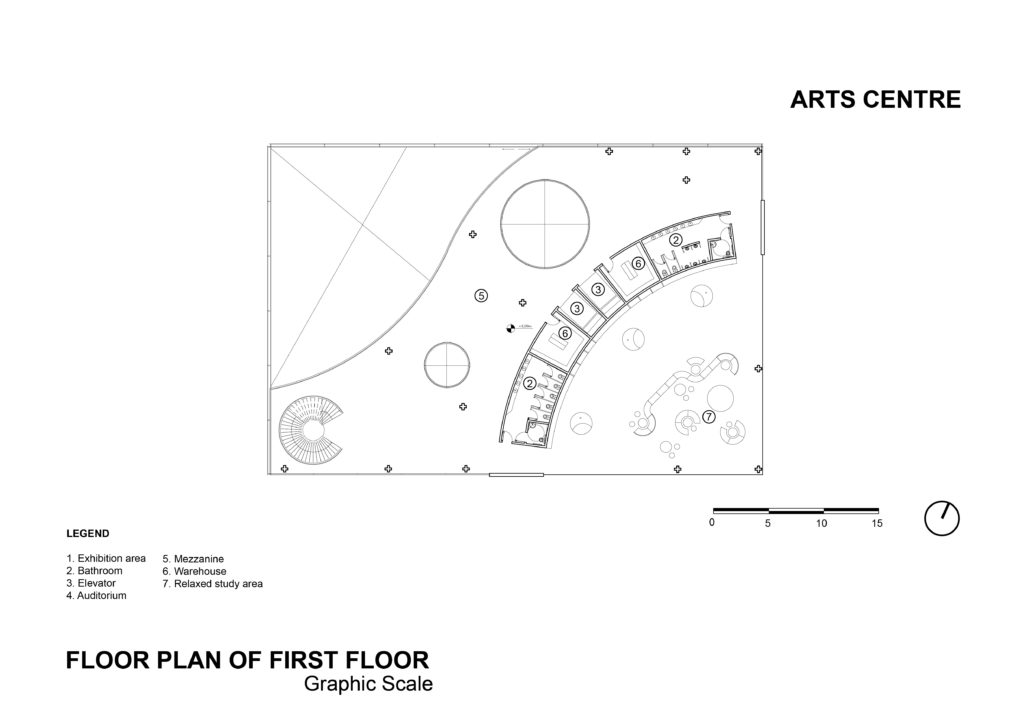 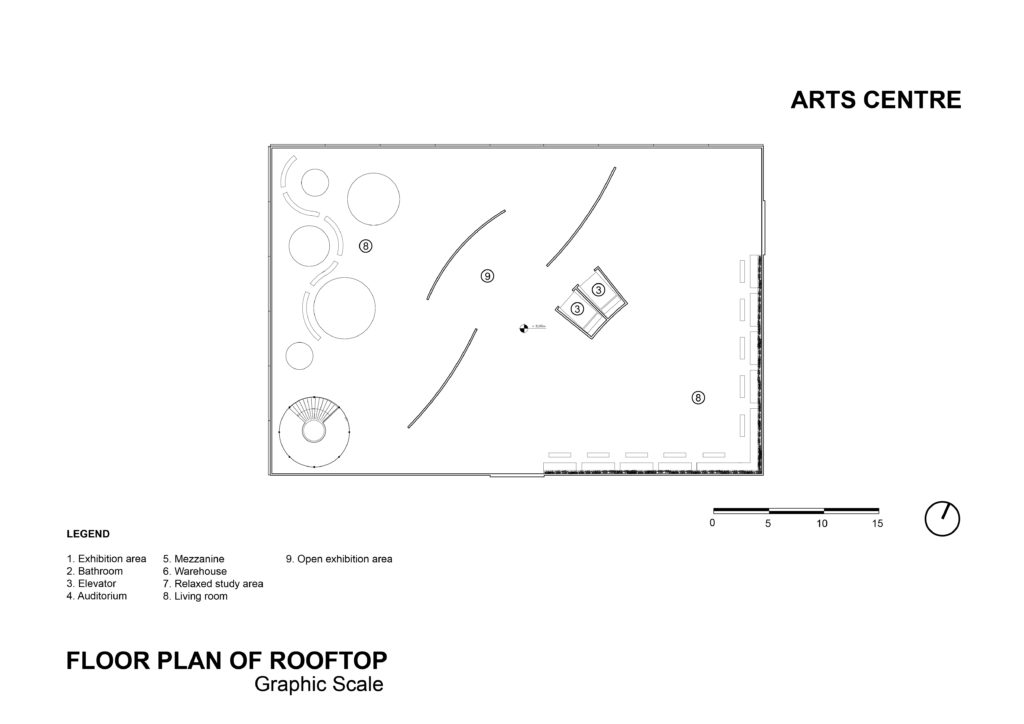 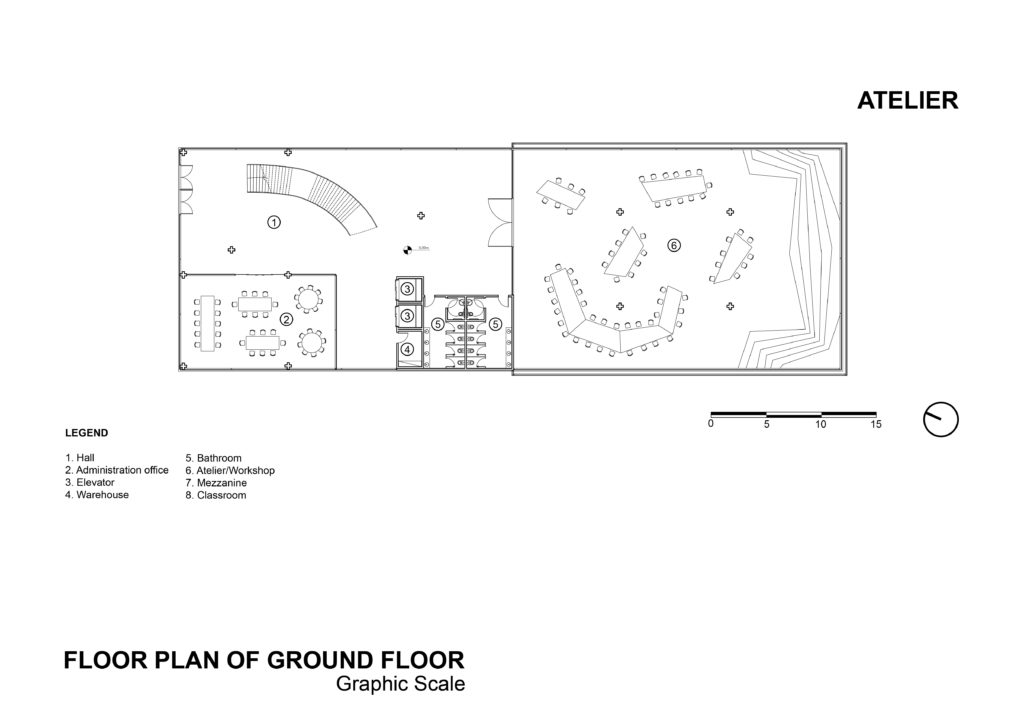 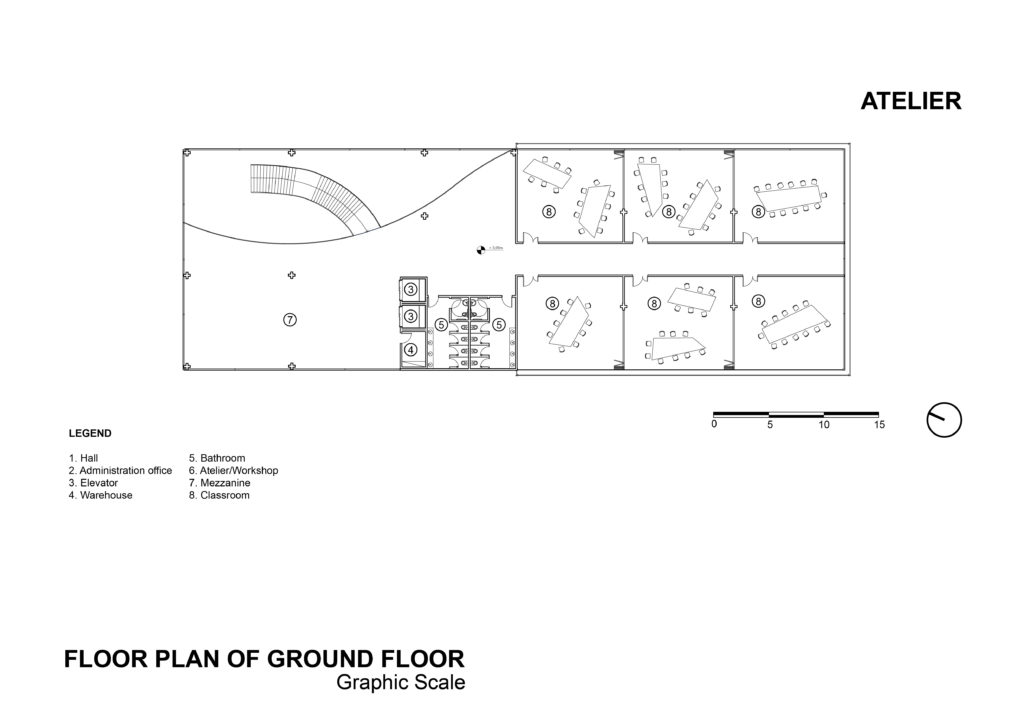 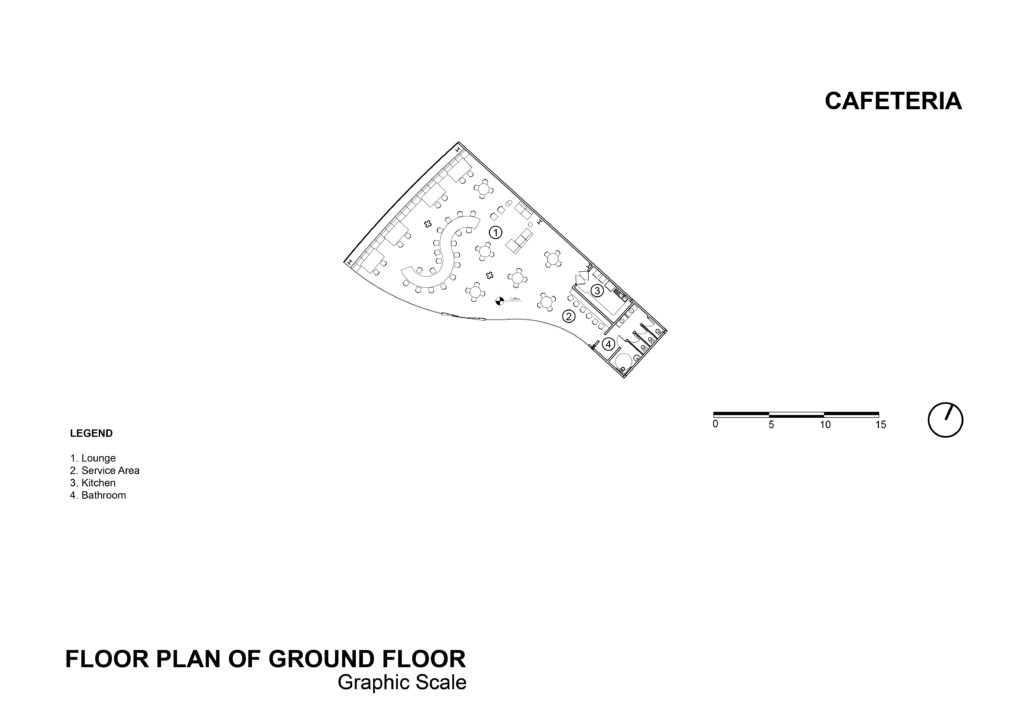