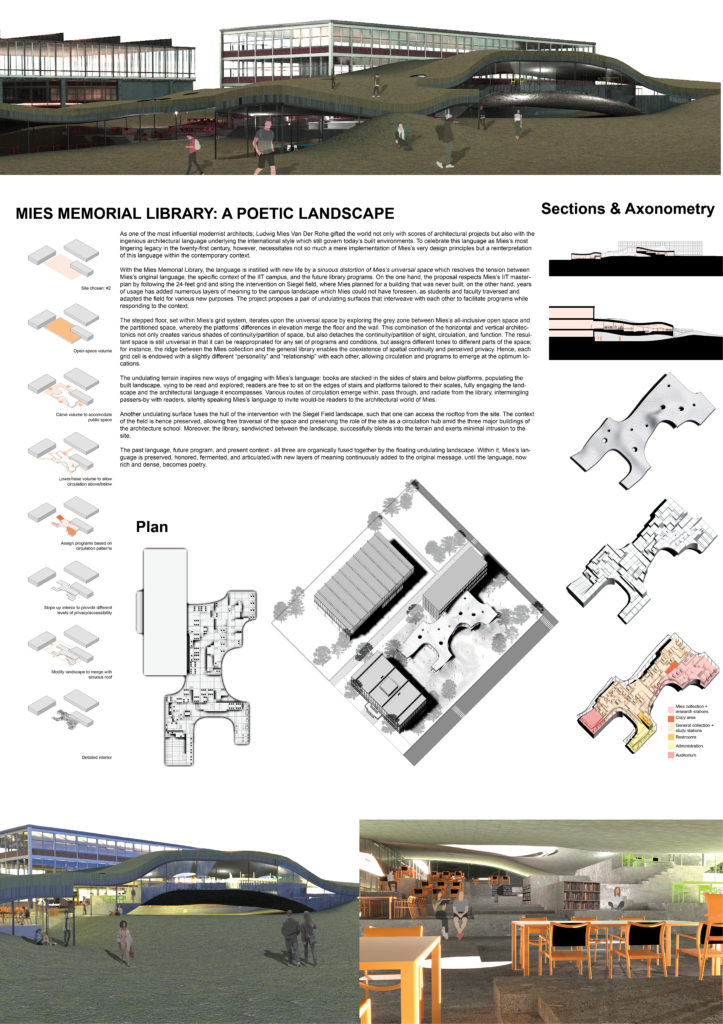 As one of the most influential modernist architects, Ludwig Mies Van Der Rohe gifted the world not only with scores of architectural projects but also with the ingenious architectural language underlying the international style which still govern today’s built environments. To celebrate this language as Mies’s most lingering legacy in the twenty-first century, however, necessitates not so much a mere implementation of Mies’s very design principles but a reinterpretation of this language within the contemporary context.

With the Mies Memorial Library, the language is instilled with new life by a sinuous distortion of Mies’s universal space which resolves the tension between Mies’s original language, the specific context of the IIT campus, and the future library programs. On the one hand, the proposal respects Mies’s IIT masterplan by following the 24-feet grid and siting the intervention on Siegel field, where Mies planned for a building that was never built; on the other hand, years of usage has added numerous layers of meaning to the campus landscape which Mies could not have foreseen, as students and faculty traversed and adapted the field for various new purposes. The project proposes a pair of undulating surfaces that interweave with each other to facilitate programs while responding to the context.

The stepped floor, set within Mies’s grid system, iterates upon the universal space by exploring the grey zone between Mies’s all-inclusive open space and the partitioned space, whereby the platforms’ differences in elevation merge the floor and the wall. This combination of the horizontal and vertical architectonics not only creates various shades of continuity/partition of space, but also detaches the continuity/partition of sight, circulation, and function. The resultant space is still universal in that it can be reappropriated for any set of programs and conditions, but assigns different tones to different parts of the space; for instance, the ridge between the Mies collection and the general library enables the coexistence of spatial continuity and perceived privacy. Hence, each grid cell is endowed with a slightly different “personality” and “relationship” with each other, allowing circulation and programs to emerge at the optimum locations.

The undulating terrain inspires new ways of engaging with Mies’s language: books are stacked in the sides of stairs and below platforms, populating the built landscape, vying to be read and explored; readers are free to sit on the edges of stairs and platforms tailored to their scales, fully engaging the landscape and the architectural language it encompasses. Various routes of circulation emerge within, pass through, and radiate from the library, intermingling passers-by with readers, silently speaking Mies’s language to invite would-be readers to the architectural world of Mies.

Another undulating surface fuses the hull of the intervention with the Siegel Field landscape, such that one can access the rooftop from the site. The context of the field is hence preserved, allowing free traversal of the space and preserving the role of the site as a circulation hub amid the three major buildings of the architecture school. Moreover, the library, sandwiched between the landscape, successfully blends into the terrain and exerts minimal intrusion to the site.

The past language, future program, and present context – all three are organically fused together by the floating undulating landscape. Within it, Mies’s language is preserved, honored, fermented, and articulated,with new layers of meaning continuously added to the original message, until the language, now rich and dense, becomes poetry.