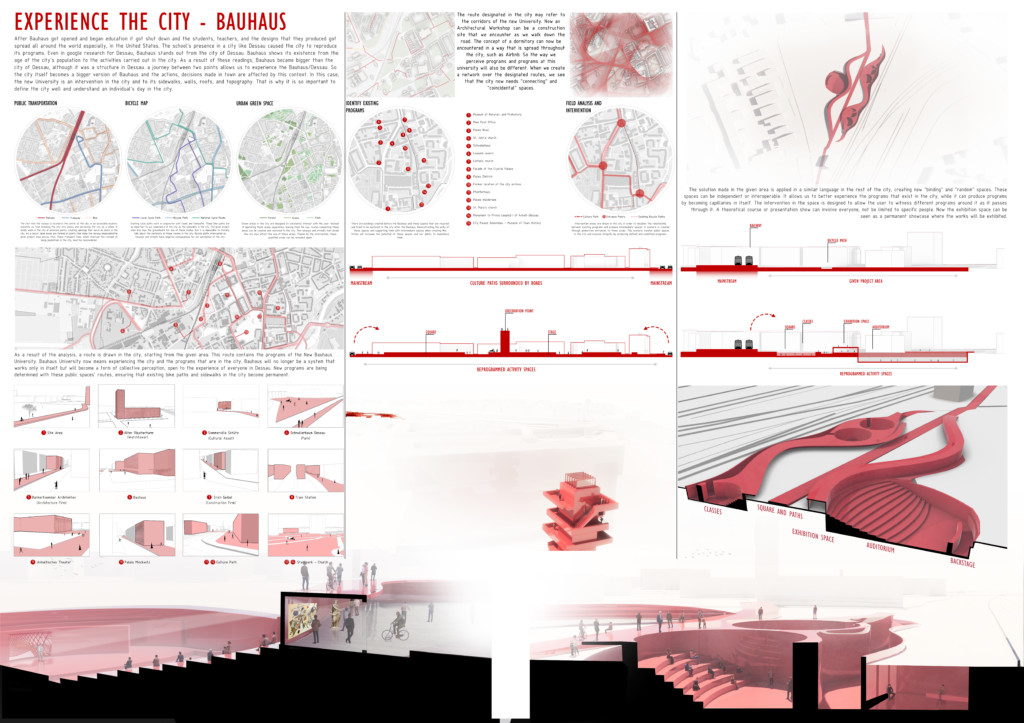 After Bauhaus got opened and began education it got shut down and the students, teachers, and the designs that they produced got spread all around the world especially, in the United States. The school’s presence in a city like Dessau caused the city to reproduce its programs. Even in google research for Dessau, Bauhaus stands out from the city of Dessau. Bauhaus shows its existence from the age of the city’s population to the activities carried out in the city. As a result of these readings, Bauhaus became bigger than the city of Dessau, although it was a structure in Dessau. a journey between two points allows us to experience the Bauhaus/Dessau. So the city itself becomes a bigger version of Bauhaus and the actions, decisions made in town are affected by this context. In this case, the new University is an intervention in the city and to its sidewalks, walls, roofs, and topography. That is why it is so important to define the city well and understand an individual’s day in the city.

The fact that the railway is located in the center of the city, in an accessible location, prevents us from breaking the city into pieces and perceiving the city as a whole. It builds walls in the city at external points, creating openings that serve as doors in the city. As a result, dead areas are formed at points that make the railway impassable(the given project area proves this). These transport lines, which interrupt the concept of being pedestrian in the city, must be reconsidered.

Existing cycle paths work in conjunction with roads and footpaths. These bike paths are as important to our experience of the city as the sidewalks in the city. The given project area also lays the groundwork for one of these routes. But it is impossible to literally talk about the continuity of these routes in the city. Bicycle paths interrupted by railways and streets have negative consequences for our perception of the city.

Green areas in the city are designed to constantly interact with the user. Instead of operating these areas separately, leaving them for use, routes connecting these areas can be created and restored to the city. The railways and streets that divide the city also affect the use of these areas. Thanks to the intervention, these qualified areas can be revealed again.

As a result of the analysis, a route is drawn in the city, starting from the given area. This route contains the programs of the New Bauhaus University. Bauhaus University now means experiencing the city and the programs that are in the city. Bauhaus will no longer be a system that works only in itself but will become a form of collective perception, open to the experience of everyone in Dessau. New programs are being determined with these public spaces’ routes, ensuring that existing bike paths and sidewalks in the city become permanent.

The route designated in the city may refer to the corridors of the new University. Now an Architectural Workshop can be a construction site that we encounter as we walk down the road. The concept of a dormitory can now be encountered in a way that is spread throughout the city, such as Airbnb. So the way we perceive programs and programs at this university will also be different. When we create a network over the designated routes, we see that the city now needs “connecting” and “coincidental” spaces.

Intervention areas are drawn in the city in order to decipher the relationship between existing programs and produce intermediate spaces. A scenario is created through pedestrian entrances to these areas. This scenario creates public spaces in the city and ensures integrity by producing defined and undefined programs.

The solution made in the given area is applied in a similar language in the rest of the city, creating new “binding” and “random” spaces. These spaces can be independent or interoperable. It allows us to better experience the programs that exist in the city, while it can produce programs by becoming capillaries in itself. The intervention in the space is designed to allow the user to witness different programs around it as it passes through it. A theoretical course or presentation show can involve everyone, not be limited to specific people. Now the exhibition space can be seen as a permanent showcase where the works will be exhibited. 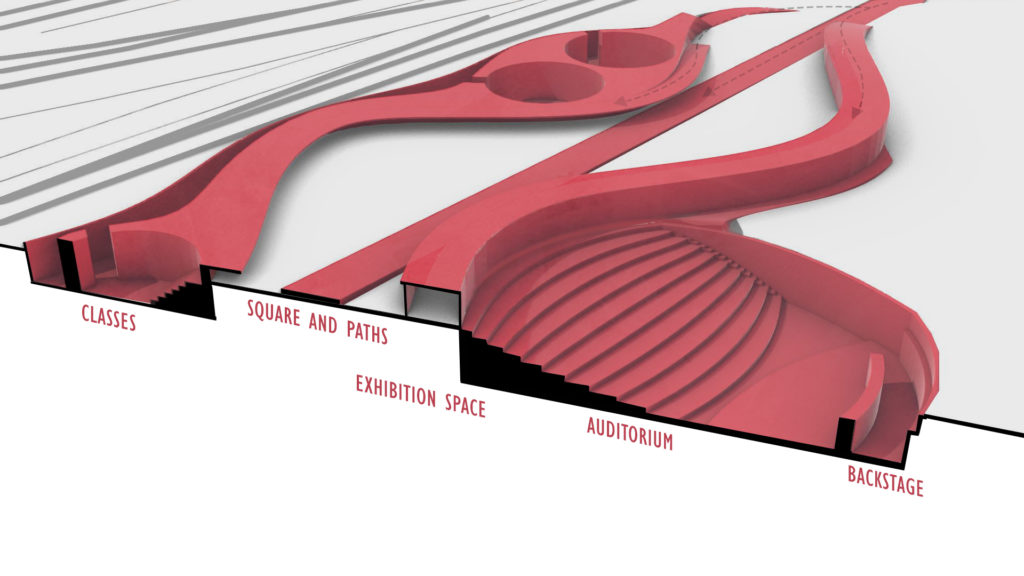 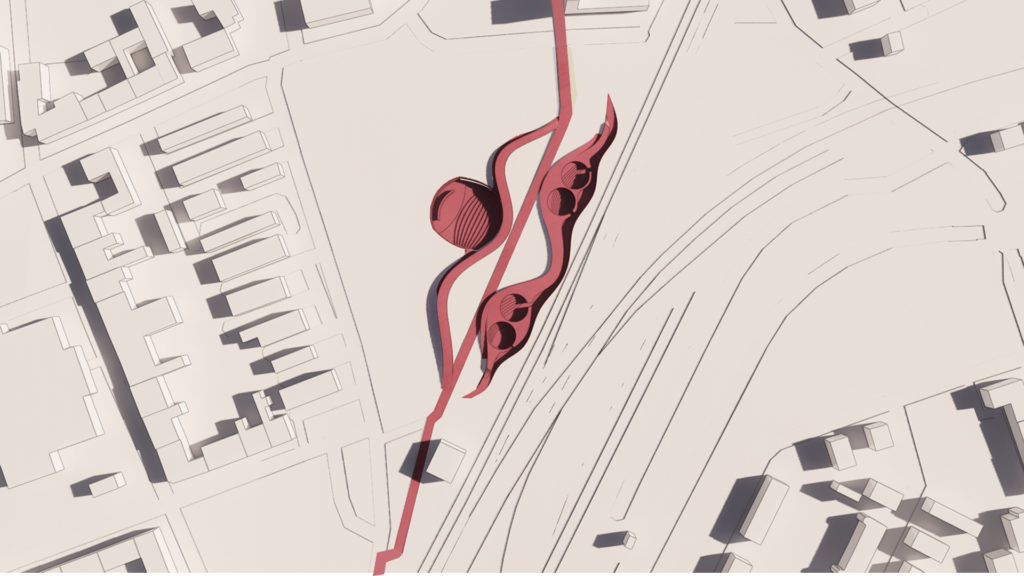 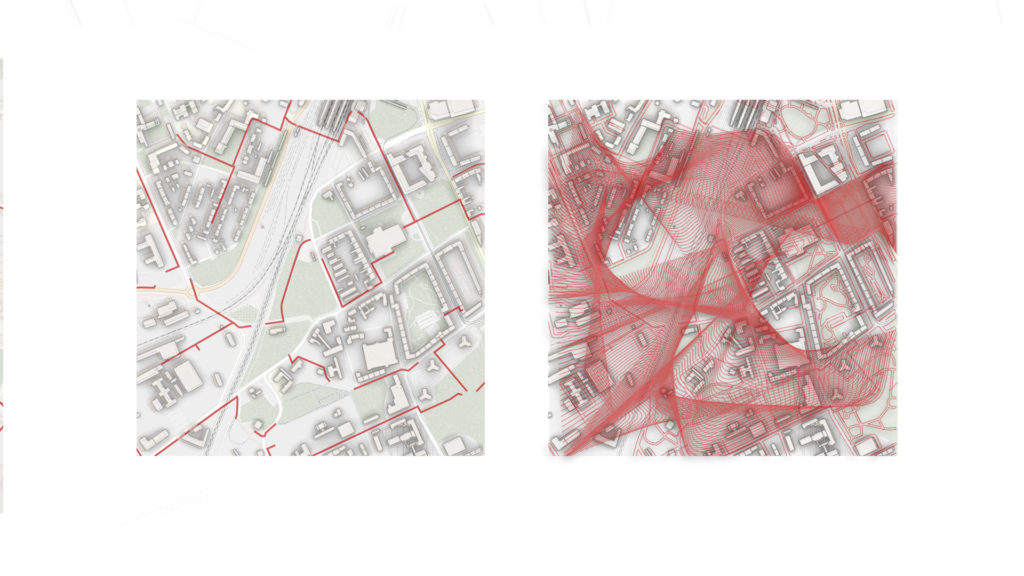 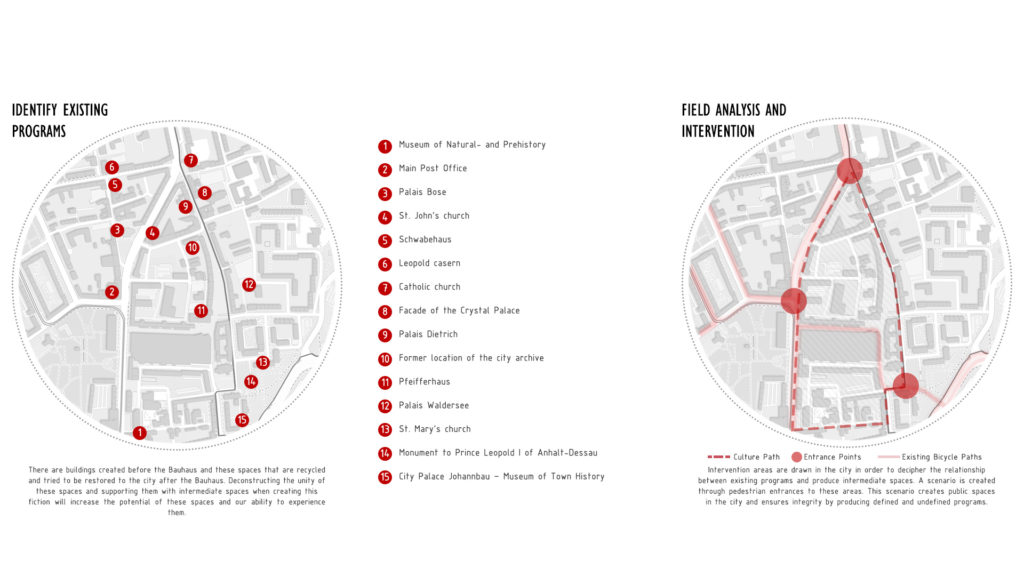 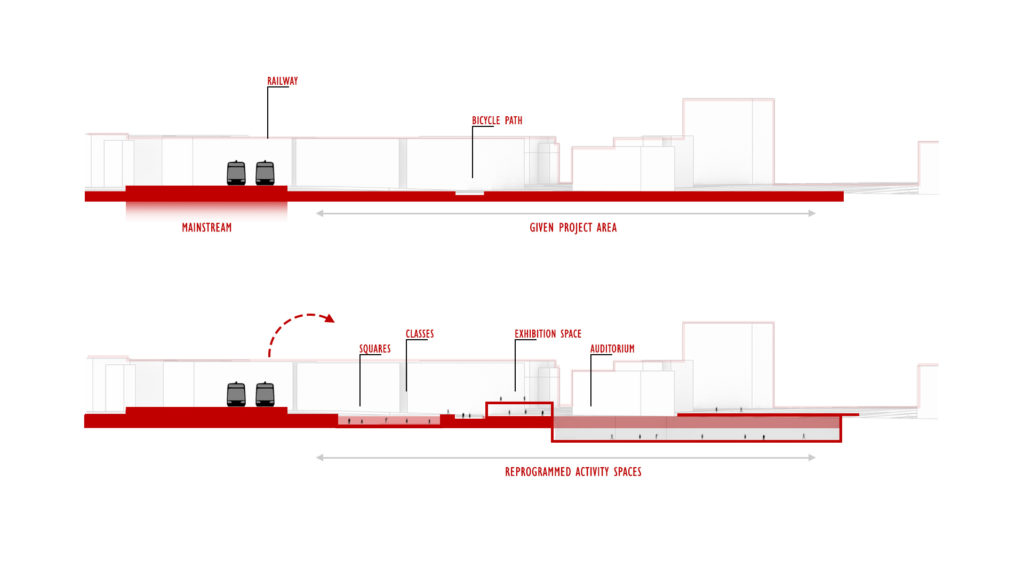 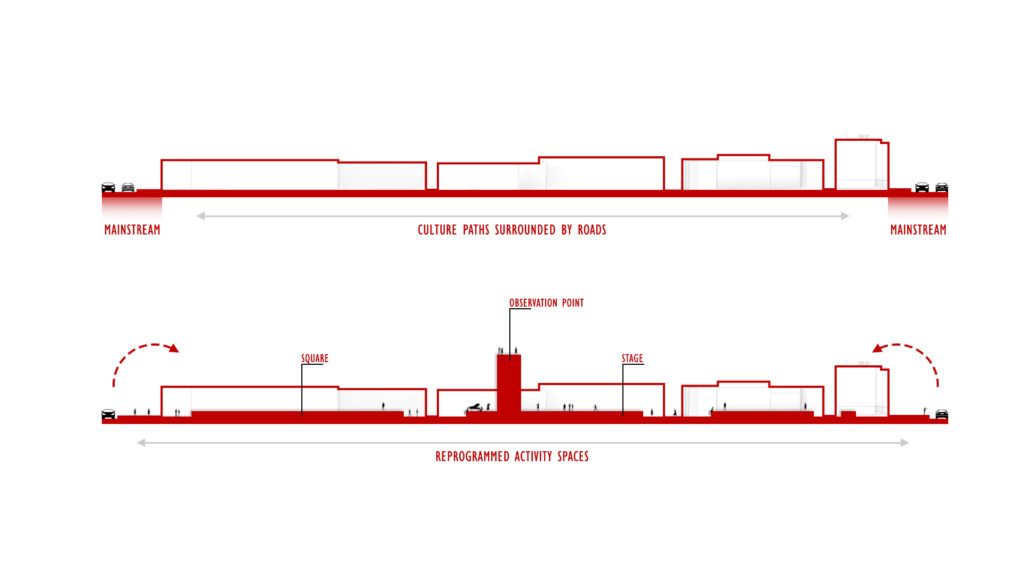 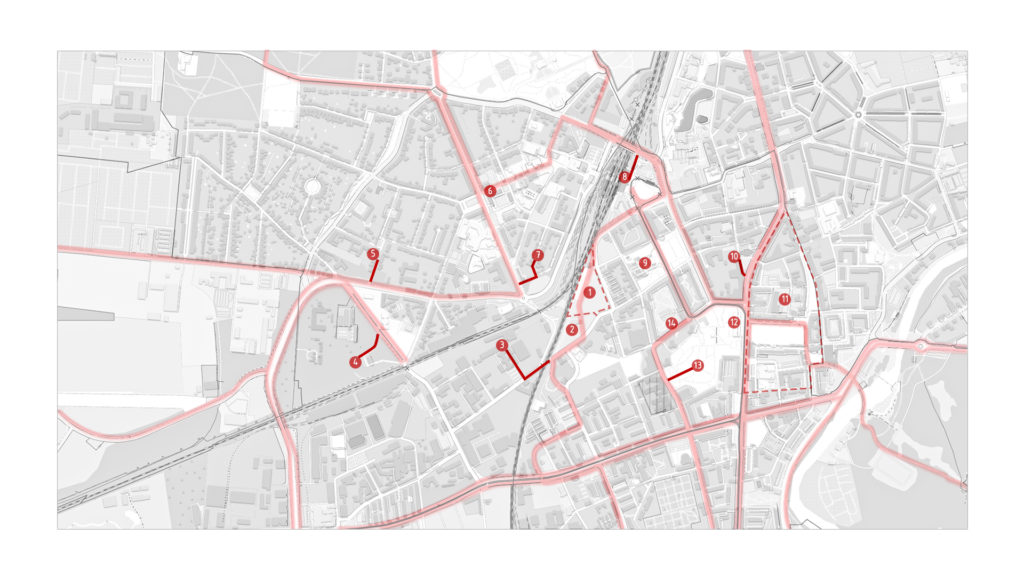 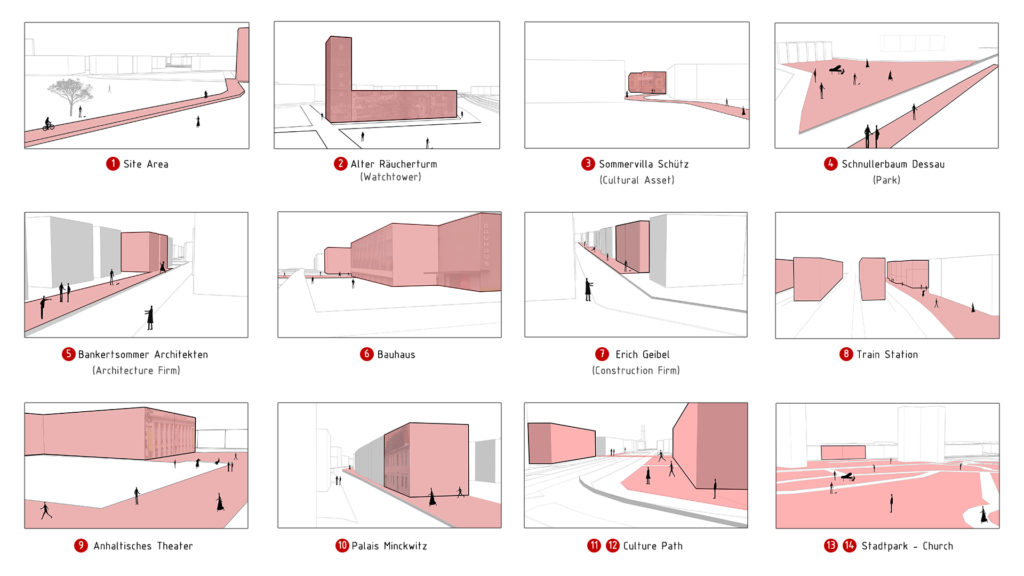 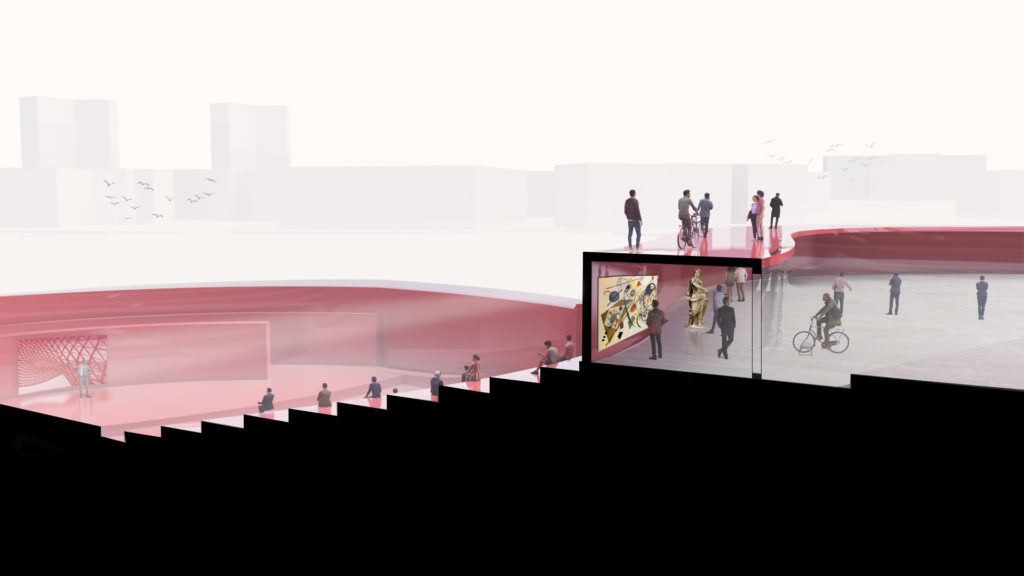 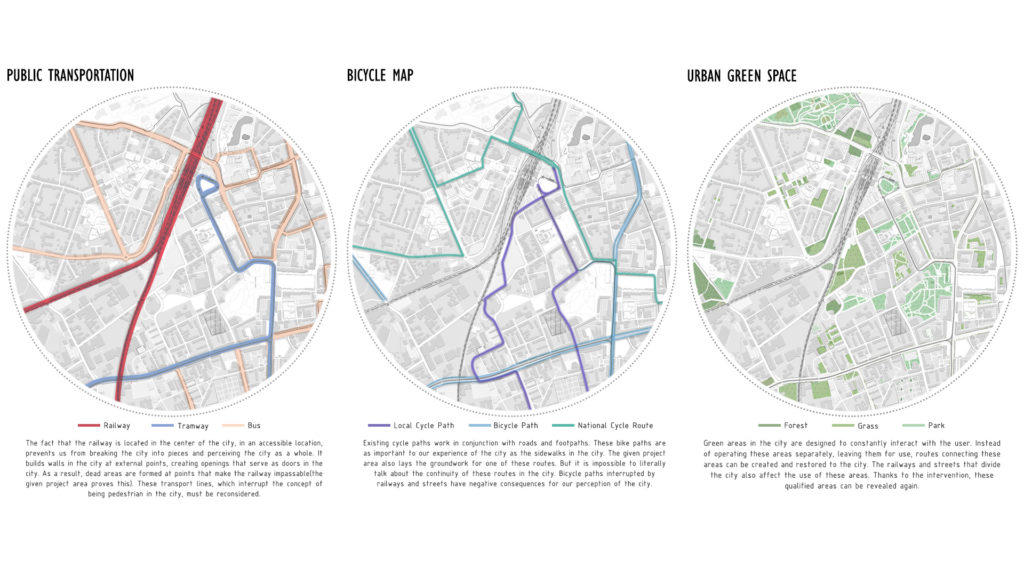 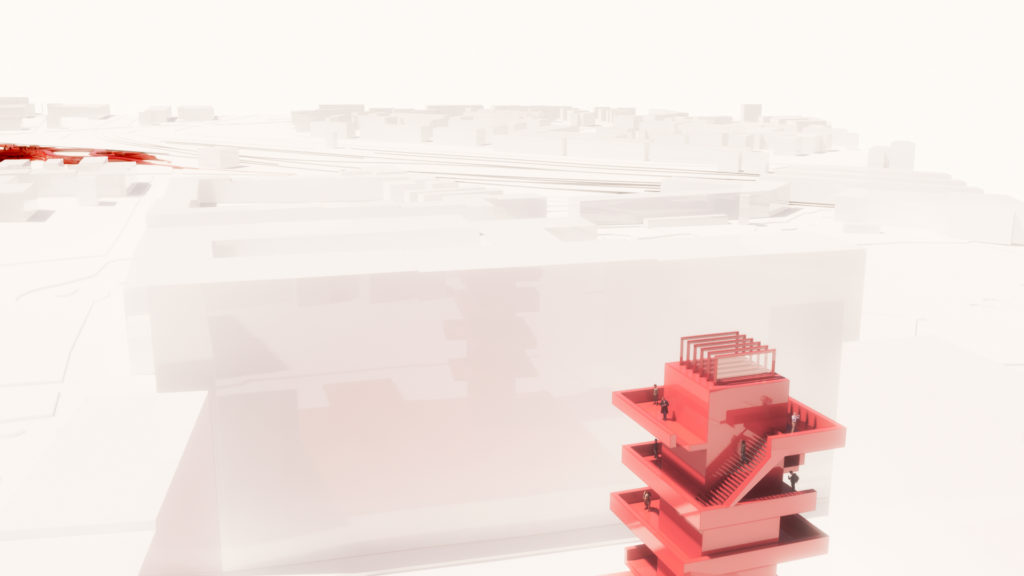