This project was selected as a Finalist by the jury of the Bauhaus Campus 2021 competition. Registration ID #7030 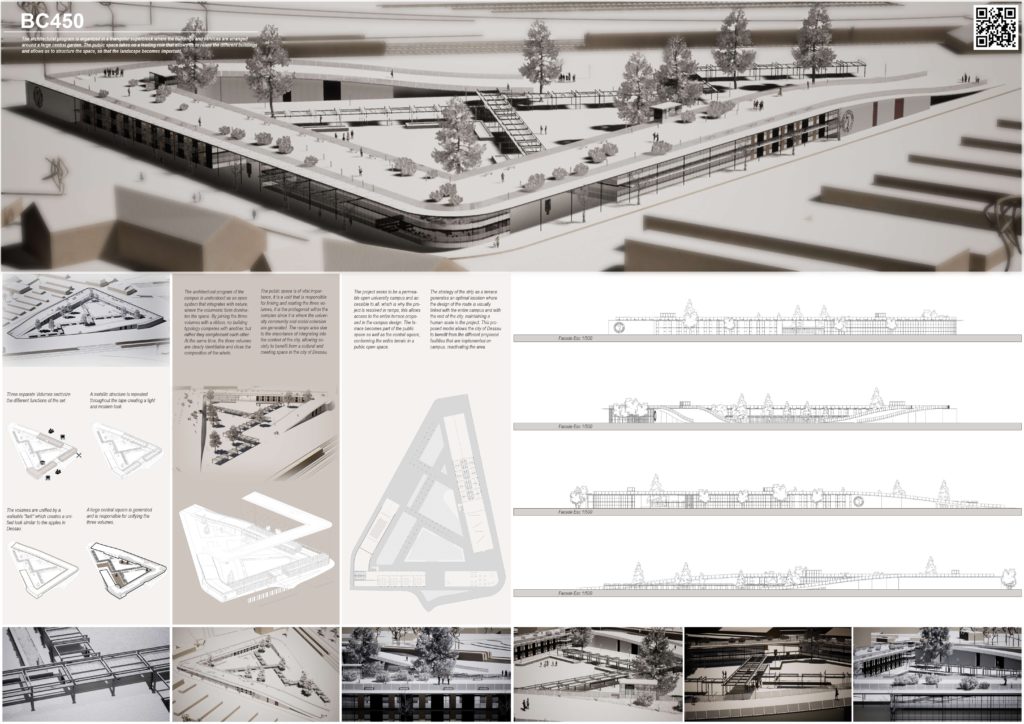 The architectural program is organized in a triangular superblock where the buildings and services are arranged around a large central garden. The public space takes on a leading role that allows us to relate the different buildings and allows us to structure the space, so that the landscape becomes important.

The strategy of the strip as a terrace generates an optimal location where the design of the route is visually linked with the entire campus and with the rest of the city, maintaining a human scale in the project. This proposed model allows the city of Dessau to benefit from the different proposed facilities that are implemented on campus, reactivating the area.

The project seeks to be a permeable open university campus and accessible to all, which is why the project is resolved in ramps, this allows access to the entire terrace proposed in the campus design. The terrace becomes part of the public space as well as the central square, conforming the entire terrain in a public open space. The public space is of vital importance, it is a void that is responsible for linking and relating the three volumes, it is the protagonist within the complex since it is where the university community and social cohesion are generated. The ramps arise due to the importance of integrating into the context of the city, allowing society to benefit from a cultural and meeting space in the city of Dessau.

The architectural program of the campus is understood as an open system that integrates with nature, where the volumetric form dominates the space. By joining the three volumes with a ribbon, no building typology competes with another, but rather they complement each other. At the same time, the three volumes are clearly identifiable and close the composition of the whole.

A metallic structure is repeated throughout the tape creating a light and modern look. Three separate Volumes sectorize the different functions of the set. The volumes are unified by a walkable “belt” which creates a unified look similar to the apples in Dessau. A large central square is generated and is responsible for unifying the three volumes.