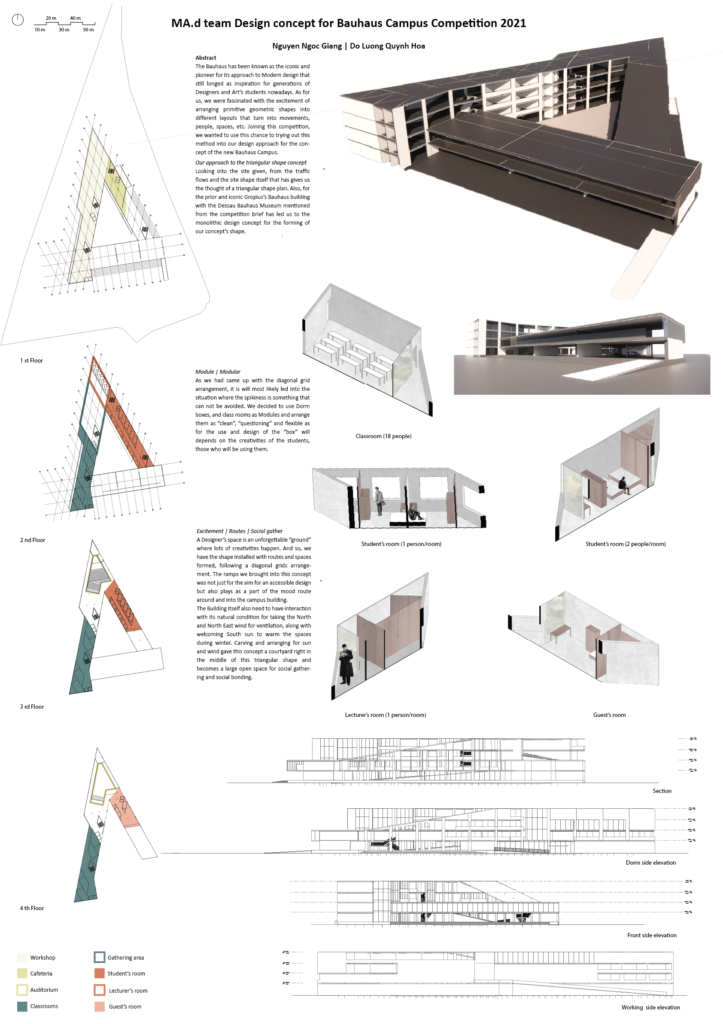 The Bauhaus has been known as the iconic and pioneer for its approach to Modern design that still longed as inspiration for generations of Designers and Art’s students nowadays. As for us, we were fascinated with the excitement of arranging primitive geometric shapes into different layouts that turn into movements, people, spaces, etc. Joining this competition, we wanted to use this chance to trying out this method into our design approach for the concept of the new Bauhaus Campus.

Our approach to the triangular shape concept

Looking into the site given, from the traffic flows and the site shape itself that has gives us the thought of a triangular shape plan. Also, for the prior and iconic Gropius’s Bauhaus building with the Dessau Bauhaus Museum mentioned from the competition brief has led us to the monolithic design concept for the forming of our concept’s shape.

A Designer’s space is an unforgettable “ground” where lots of creativities happen. And so, we have the shape installed with routes and spaces formed, following a diagonal grids arrangement. The ramps we brought into this concept was not just for the aim for an accessible design but also plays as a part of the mood route around and into the campus building.

The Building itself also need to have interaction with its natural condition for taking the North and North East wind for ventilation, along with welcoming South sun to warm the spaces during winter. Carving and arranging for sun and wind gave this concept a courtyard right in the middle of this triangular shape and becomes a large open space for social gathering and social bonding.

As we had came up with the diagonal grid arrangement, it is will most likely led into the situation where the spikiness is something that can not be avoided. We decided to use Dorm boxes, and class rooms as Modules and arrange them as “clean”, “questioning” and flexible as for the use and design of the “box” will depends on the creativities of the students, those who will be using them.