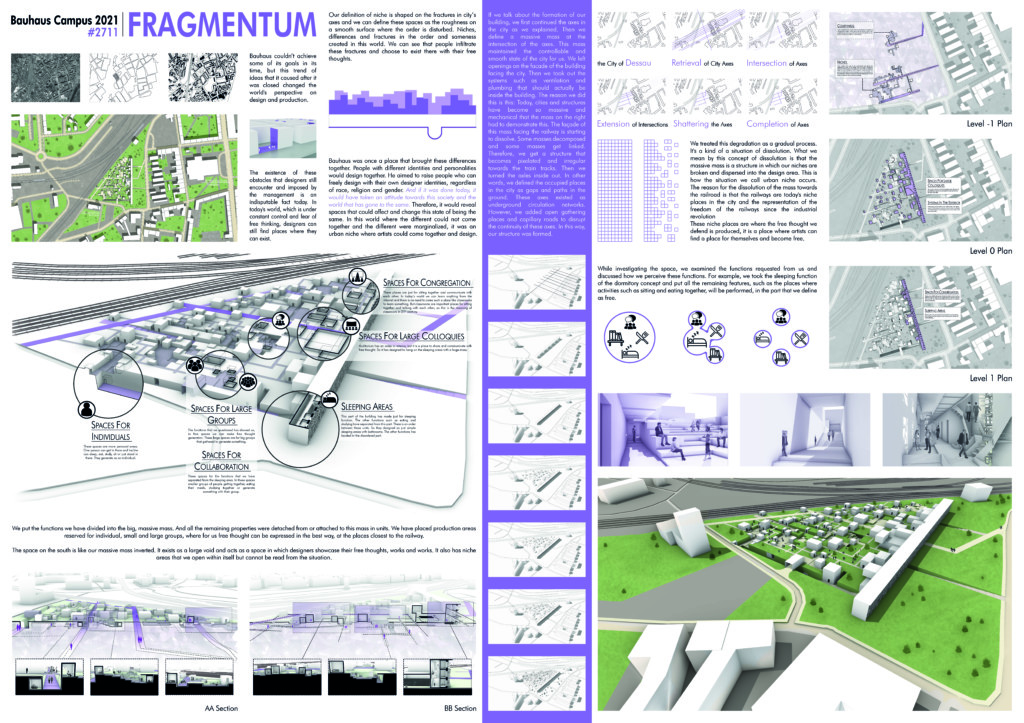 Bauhaus couldn’t achieve some of its goals in its time, but this trend of ideas that it caused after it was closed changed the world’s perspective on design and production.

The existence of these obstacles that designers still encounter and imposed by the management is an indisputable fact today. In today’s world, which is under constant control and fear of free thinking, designers can still find places where they can exist.

Our definition of niche is shaped on the fractures in city’s axes and we can define these spaces as the roughness on a smooth surface where the order is disturbed. Niches, differences and fractures in the order and sameness created in this world. We can see that people infiltrate these fractures and choose to exist there with their free thoughts.

Bauhaus was once a place that brought these differences together. People with different identities and personalities would design together. He aimed to raise people who can freely design with their own designer identities, regardless of race, religion and gender. And if it was done today, it would have taken an attitude towards this society and the world that has gone to the same. Therefore, it would reveal spaces that could affect and change this state of being the same. In this world where the different could not come together and the different were marginalized, it was an urban niche where artists could come together and design.

Formation
If we talk about the formation of our building, we first continued the axes in the city as we explained. Then we define a massive mass at the intersection of the axes. This mass maintained the controllable and smooth state of the city for us. We left openings on the facade of the building facing the city. Then we took out the systems such as ventilation and plumbing that should actually be inside the building. The reason we did this is this: Today, cities and structures have become so massive and mechanical that the mass on the right had to demonstrate this. The façade of this mass facing the railway is starting to dissolve. Some masses decomposed and some masses get linked. Therefore, we get a structure that becomes pixelated and irregular towards the train tracks. Then we turned the axles inside out. In other words, we defined the occupied places in the city as gaps and paths in the ground. These axes existed as underground circulation networks. However, we added open gathering places and capillary roads to disrupt the continuity of these axes. In this way, our structure was formed.

Functions
We put the functions we have divided into the big, massive mass. And all the remaining properties were detached from or attached to this mass in units. We have placed production areas reserved for individual, small and large groups, where for us free thought can be expressed in the best way, at the places closest to the railway.

The space on the south is like our massive mass inverted. It exists as a large void and acts as a space in which designers showcase their free thoughts, works and works. It also has niche areas that we open within itself but cannot be read from the situation.

We treated this degradation as a gradual process. It’s a kind of a situation of dissolution. What we mean by this concept of dissolution is that the massive mass is a structure in which our niches are broken and dispersed into the design area. This is how the situation we call urban niche occurs. The reason for the dissolution of the mass towards the railroad is that the railways are today’s niche places in the city and the representation of the freedom of the railways since the industrial revolution.

These niche places are where the free thought we defend is produced, it is a place where artists can find a place for themselves and become free. As a result: artists who cannot be controlled from the outside in or under niches that they can freely perform their arts, but we have created a space where he can show what he does when they want to shout out his thoughts.

While investigating the space, we examined the functions requested from us and discussed how we perceive these functions. For example, we took the sleeping function of the dormitory concept and put all the remaining features, such as the places where activities such as sitting and eating together, will be performed, in the part that we define as free.

Texts in Plans and Views;