The Worm by Rosa Luxemburgo 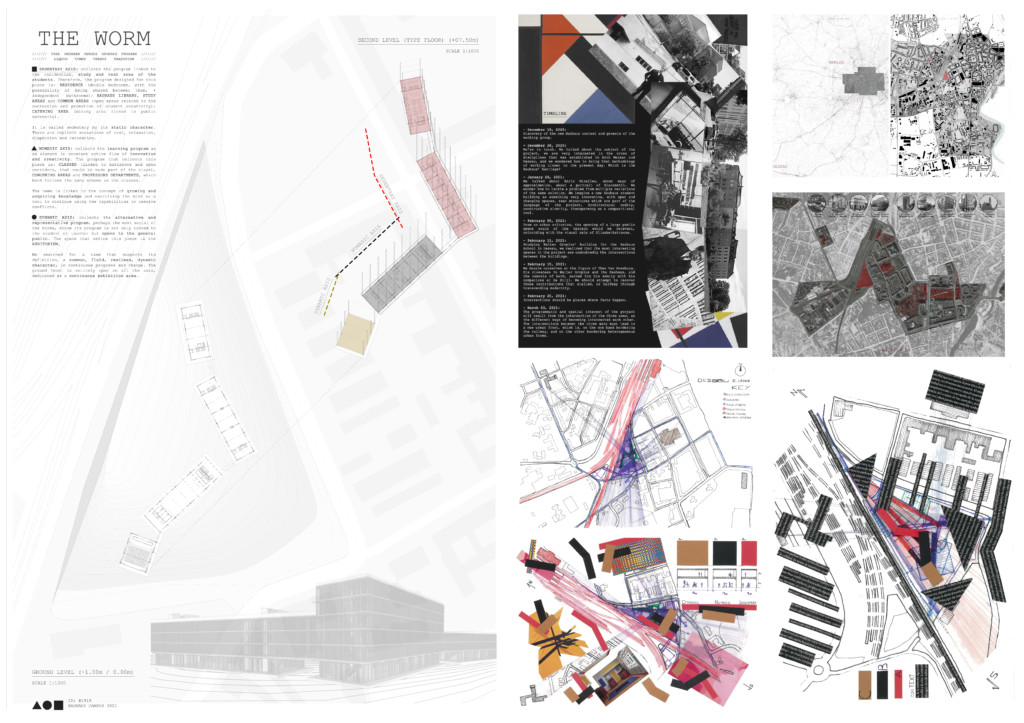 –    SEDENTARY AXIS: collects the program linked to the residential, study and rest area of the students. Therefore, the program designed for this piece is: RESIDENCE (double bedrooms, with the possibility of being shared between them, + independent  bathrooms); BAUHAUS LIBRARY, STUDY AREAS and COMMON AREAS (open areas related to the recreation and promotion of student creativity); CATERING AREA (dining area linked to public cafeteria).

It is called sedentary by its static character. There are implicit sensations of rest, relaxation, dispersion and recreation.

–    NOMADIC AXIS: collects the learning program as an element in constant active flow of innovation and creativity. The program that collects this piece is: CLASSES (linked to bathrooms and open corridors, that could be made part of the class), COWORKING AREAS and PROFESSORS DEPARTMENTS, which both follows the same scheme as the classes.

The name is linked to the concept of growing and acquiring knowledge and exercising the mind as a tool to continue using the capabilities to resolve conflicts.

–    DYNAMIC AXIS: collects the alternative and representative program, perhaps the most social of the three, since its program is not only linked to the student or teacher but opens to the general public. The space that define this piece is the AUDITORIUM.

We searched for a name that supports its definition, a common, fluid, restless, dynamic character, in continuous progress and change. The ground level is entirely open on all the axis, dedicated as a continuous exhibition area.

Discovery of the new Bauhaus contest and genesis of the working group.

We’re in touch. We talked about the subject of the project, we are very interested in the cross of disciplines that was established in both Weimar and Dessau, and we wondered how to bring that methodology of working closer to the present day. Which is the Bauhaus’ heritage?

We talked about Enric Miralles, about ways of approximation, about a portrait of Giacometti. We wonder how to tackle a problem from multiple variations of the same solution. We imagine a new Bauhaus student building as something very innovative, with open and changing spaces, seen structures which are part of the language of the project. Architectural nudity, constructive sincerity, transparency as a compositional tool.

From an urban criterion, the opening of a large public space south of the terrain would be relevant, coinciding with the visual axis of Elisabethstracae.

Studying Walter Gropius’ building for the Bauhaus School in Dessau, we realized that the most interesting spaces in the project are undoubtedly the intersections between the buildings.

We dazzle ourselves at the figure of Theo Van Doesburg. His closeness to Walter Gropius and the Bauhaus, and the osmosis with both, earned him his enmity with his companions at De Stijl. We should attempt to recover those contributions that stalled, or halfway through transcending modernity.

Intersections should be places where facts happen.

The programmatic and spatial interest of the project will result from the intersection of the three axes, as the different ways of becoming intersected each other.

The intersections between the three axis must lead to a new urban front, which is, on the one hand bordering the railway, and on the other bordering heterogeneous urban forms. 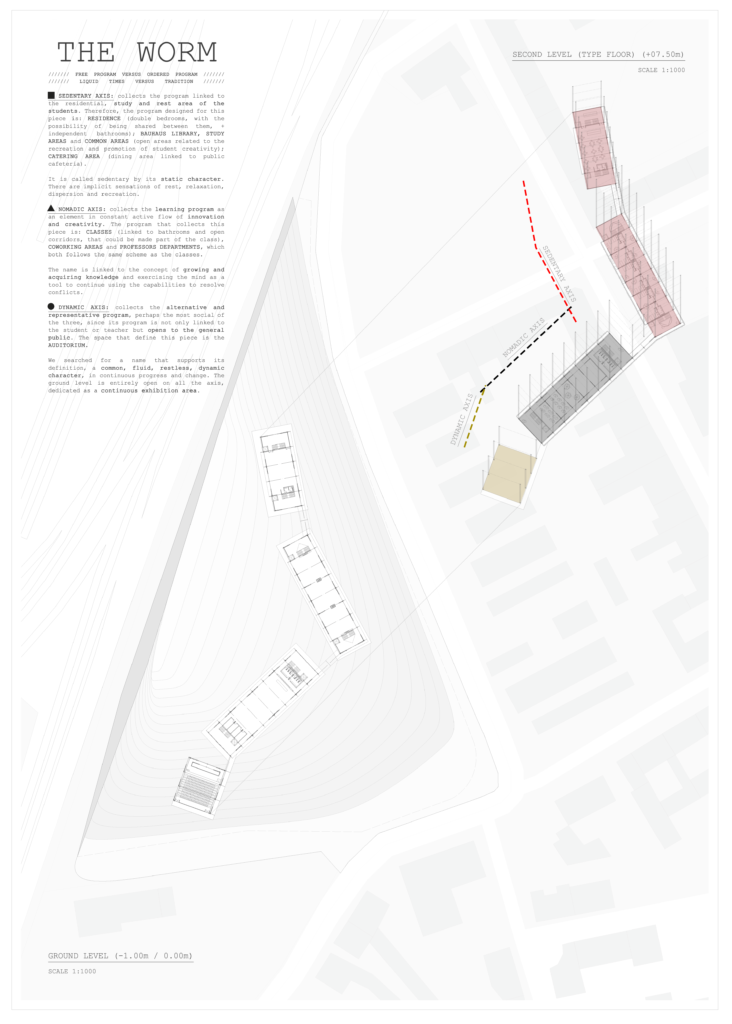 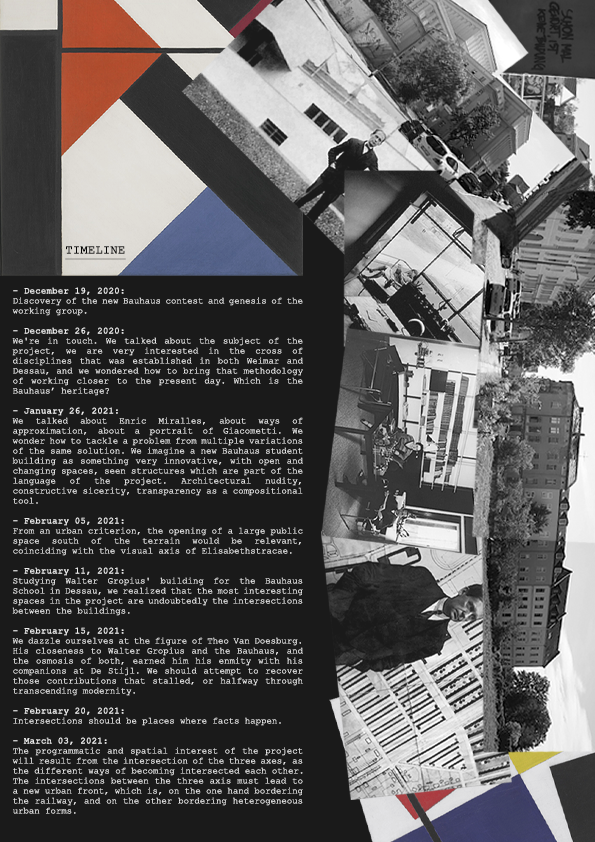 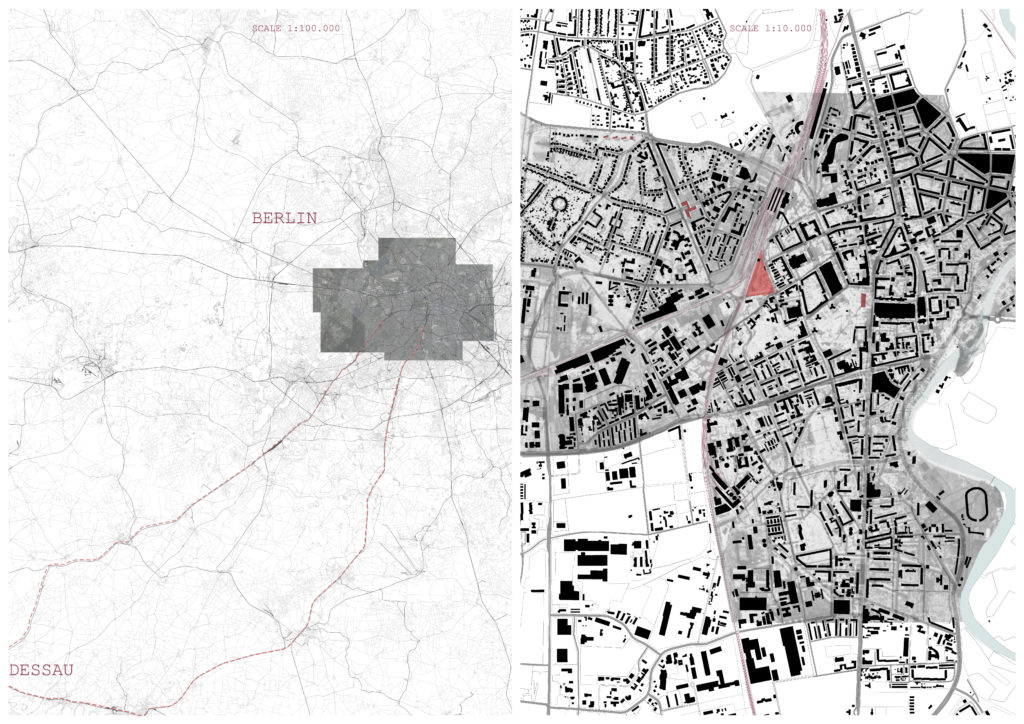 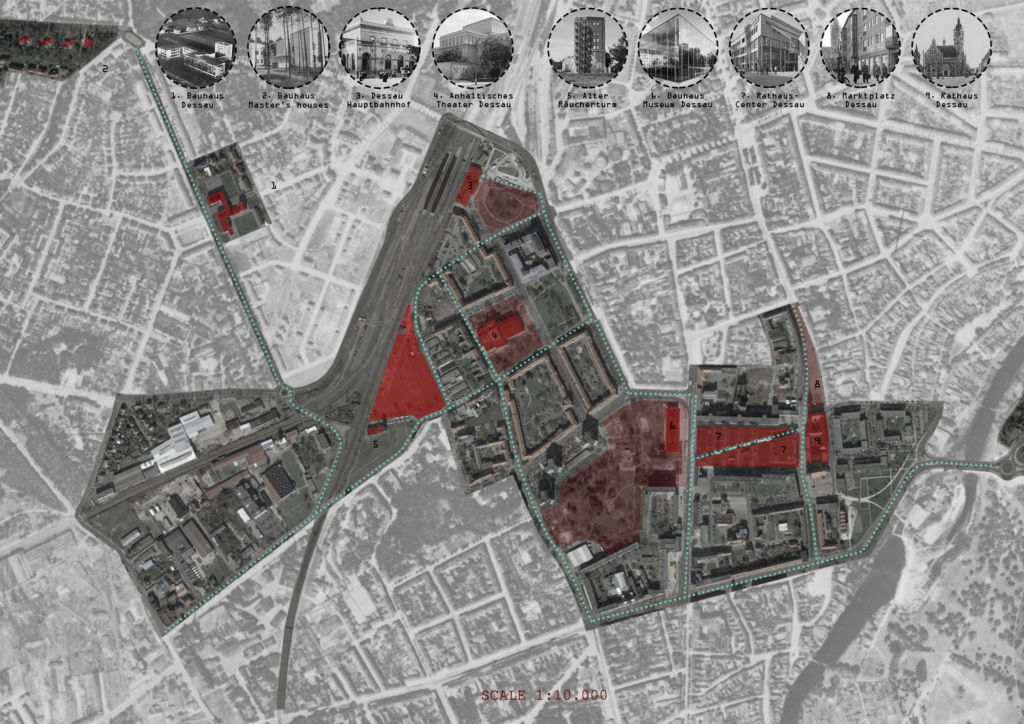 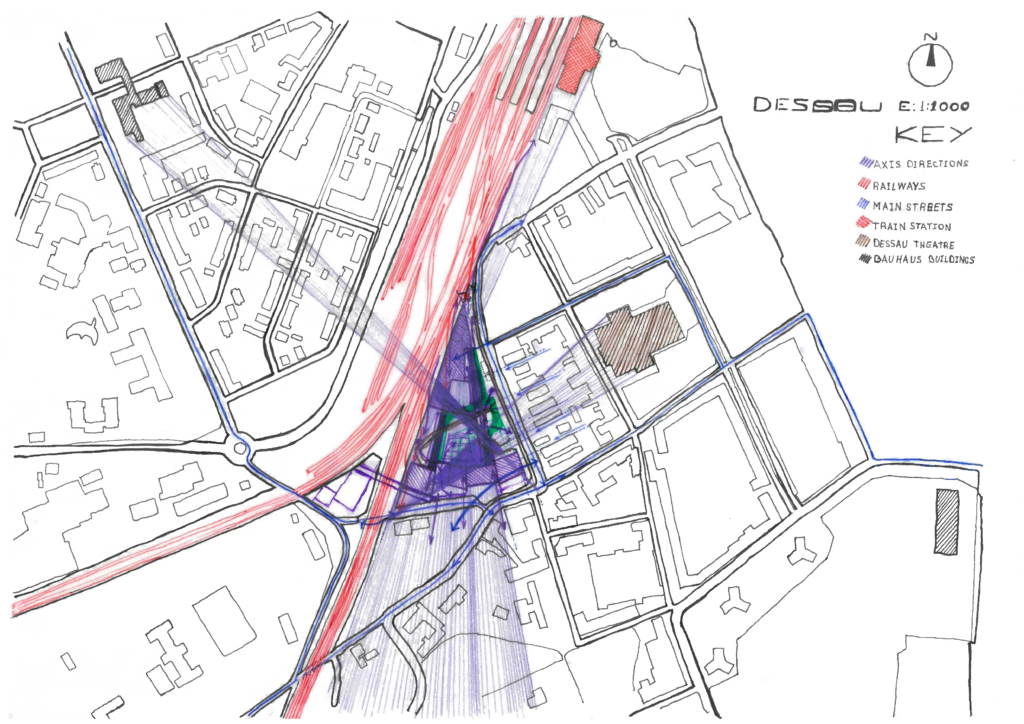 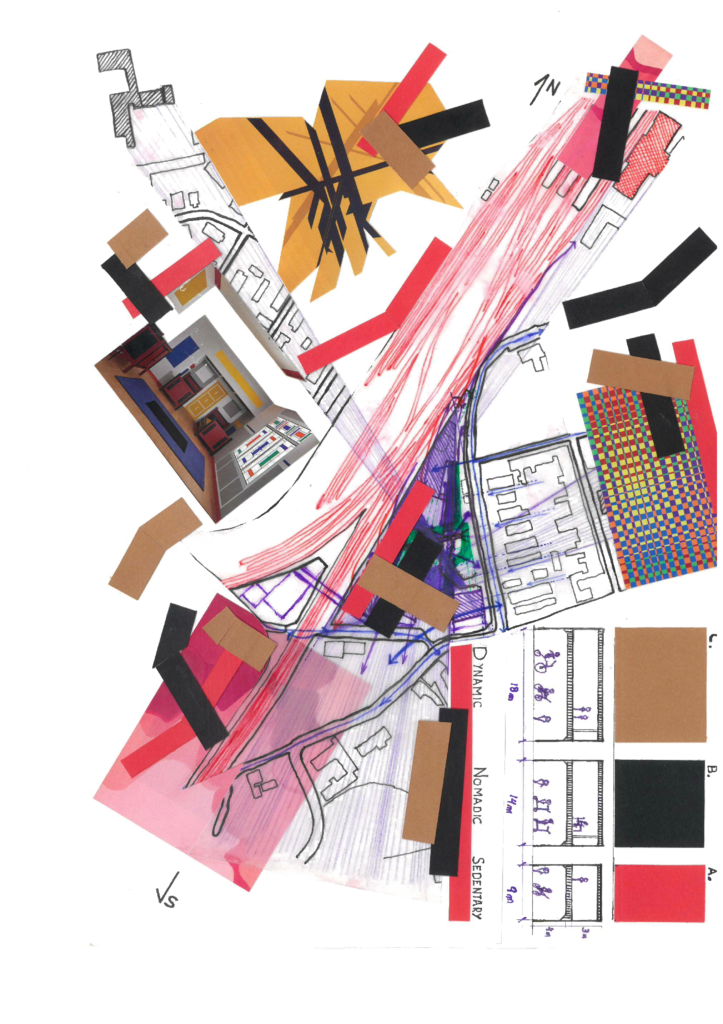 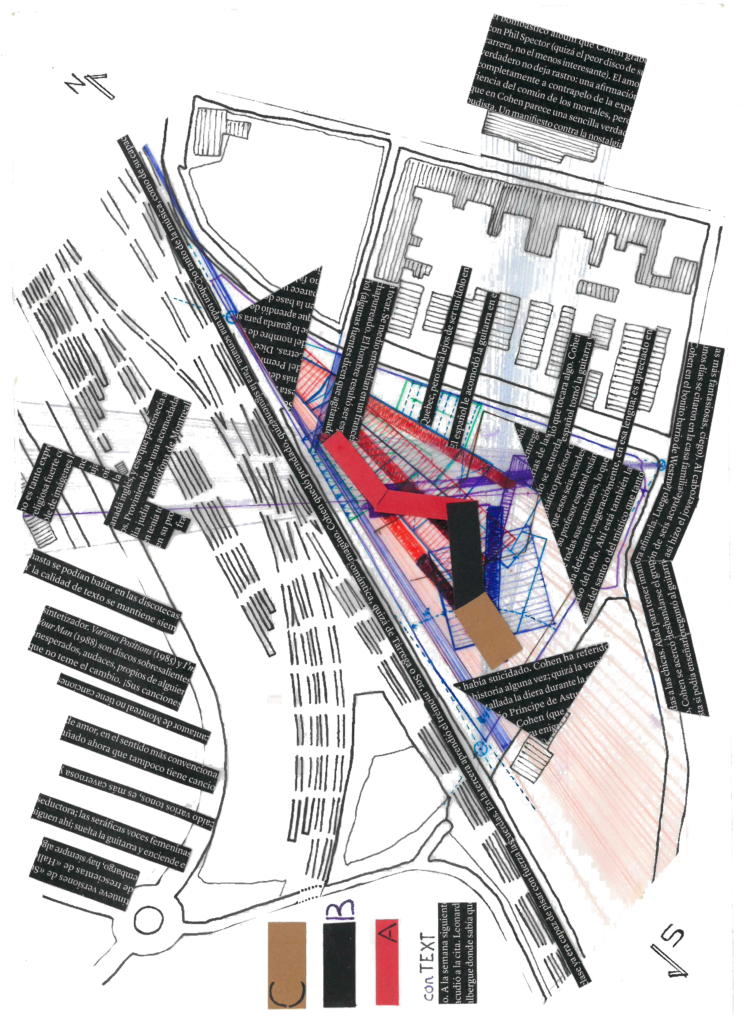 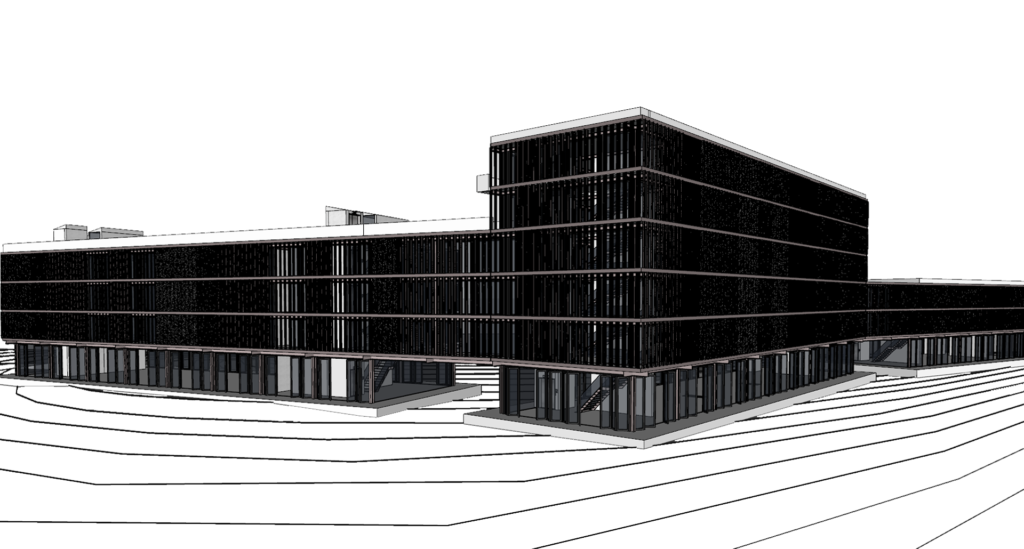