The shell by WaitList Architects 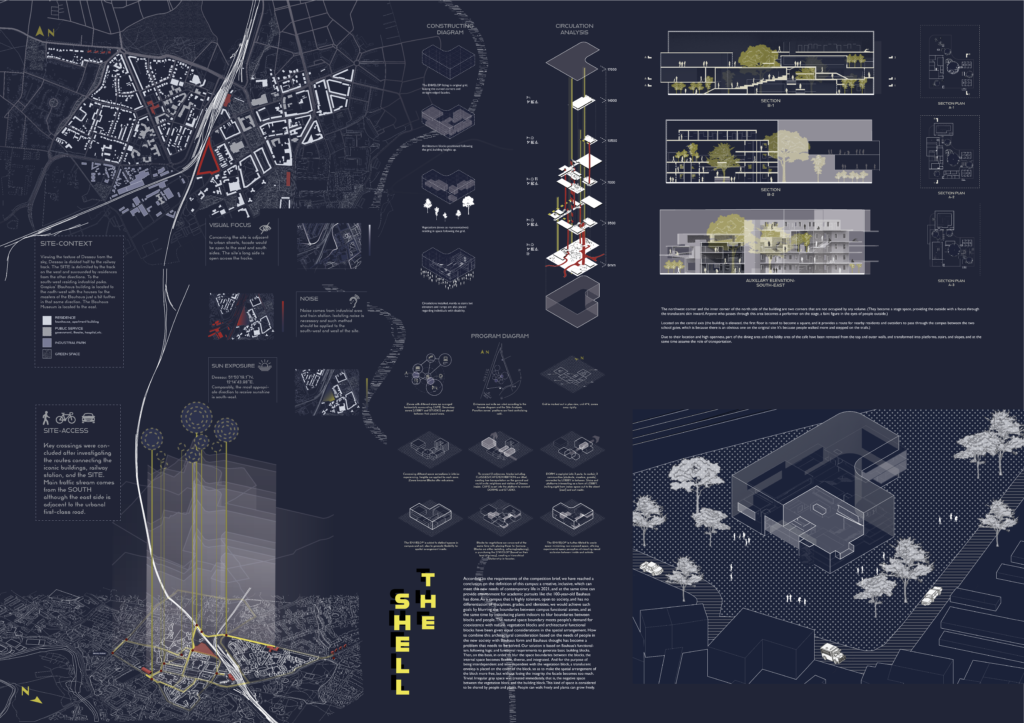 According to the requirements of the competition brief, we have reached a conclusion on the definition of this campus: a creative, inclusive, which can meet the new needs of contemporary life in 2021, and at the same time can provide environment for academic pursuits like the 100-year-old Bauhaus has done. As a campus that is highly tolerant, open to society, and has no differentiation of disciplines, grades, and identities, we would achieve such goals by blurring the boundaries between campus functional zones, and at the same time by introducing plants indoors to blur boundaries between blocks and people. The natural space boundary meets people’s demand for coexistence with nature. vegetation blocks and architectural functional blocks have been given equal considerations in the spatial arrangement. How to combine this architectural consideration based on the needs of people in the new society with Bauhaus form and Bauhaus thought has become a problem that needs to be solved.

Our solution is based on Bauhaus’s functionalism, following logic and functional requirements to generate basic building blocks. Then, on this basis, in order to blur the space boundaries between the blocks, the internal space becomes flexible, diverse, and integrated. And for the purpose of being interdependent and interdependent with the vegetation block, a translucent envelop is placed on the cover of the block, so as to make the spatial arrangement of the block more frees, but without losing the integrity, the facade becomes too much. Trivial. Irregular gray space was created immediately, that is, the negative space between the vegetation block and the building block. This kind of space is considered to be shared by people and plants. People can walk freely and plants can grow freely.

The northwest corner and the inner corner of the north side of the building are two corners that are not occupied by any volume. (They become a stage space, providing the outside with a focus through the translucent skin inward. Anyone who passes through this area becomes a performer on the stage, a faint figure in the eyes of people outside.)

Located on the central axis (the building is elevated, the first floor is raised to become a square, and it provides a route for nearby residents and outsiders to pass through the campus between the two school gates, which is because there is an obvious one on the original site It’s because people walked more and stepped on the trails.)

Due to their location and high openness, part of the dining area and the lobby area of the cafe have been removed from the top and outer walls, and transformed into platforms, stairs, and slopes, and at the same time assume the role of transportation.

Zones with different sizes are arranged horizontally surrounding CAFÉ. Secondary zones (LOBBY and STUDIO) are placed between their parent ones.

Entrances and exits are ruled according to the Access diagram and the Site Analysis. Function zones’ positions are fixed centralizing café.

To connect 2 entrances, blocks including CLASSES/CAFÉ/EXHIBITION are lifted, creating free transportation on the ground and could invite neighbors and visitors of Dessau inside. CAFÉ is set into the platform to connect DORMS and STUDIO.

DORM is exploded into 3 parts, to contain 3 communities (students, masters, guests), connected by LOBBY in between. Stairs and platforms intersecting as a form of LOBBY, inviting sight from indoor space out to the street (east) and out inside.

The ENVELOP is added to distinct spaces in campus and out, also to generate flexibility for spatial arrangement inside.

Blocks for vegetations are concerned at the same time with placing those for humans. Blocks are either isolating, adhering(replacing), or puncturing the ENVELOP (based on their level of privacy), creating a hierarchical relationship in facades.

The ENVELOP is further filleted to create space mimicking non-cornered space, offering experimental space perception eliminating visual occlusion between inside and outside. 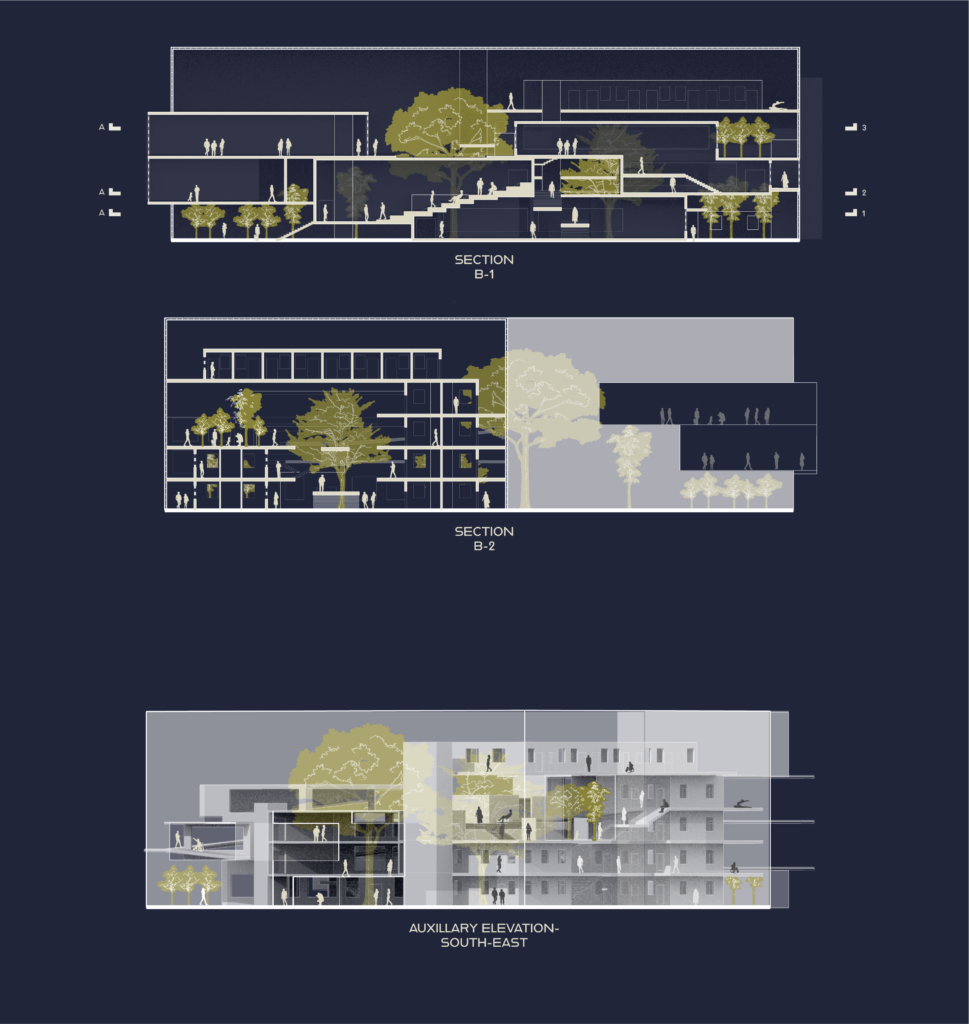 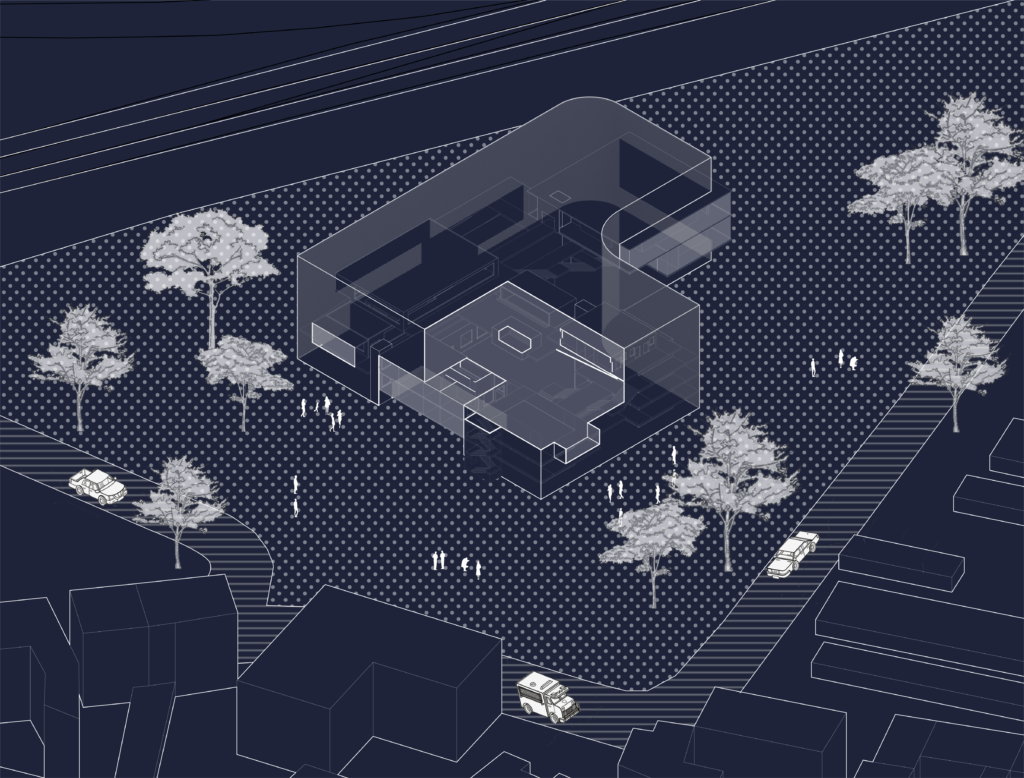 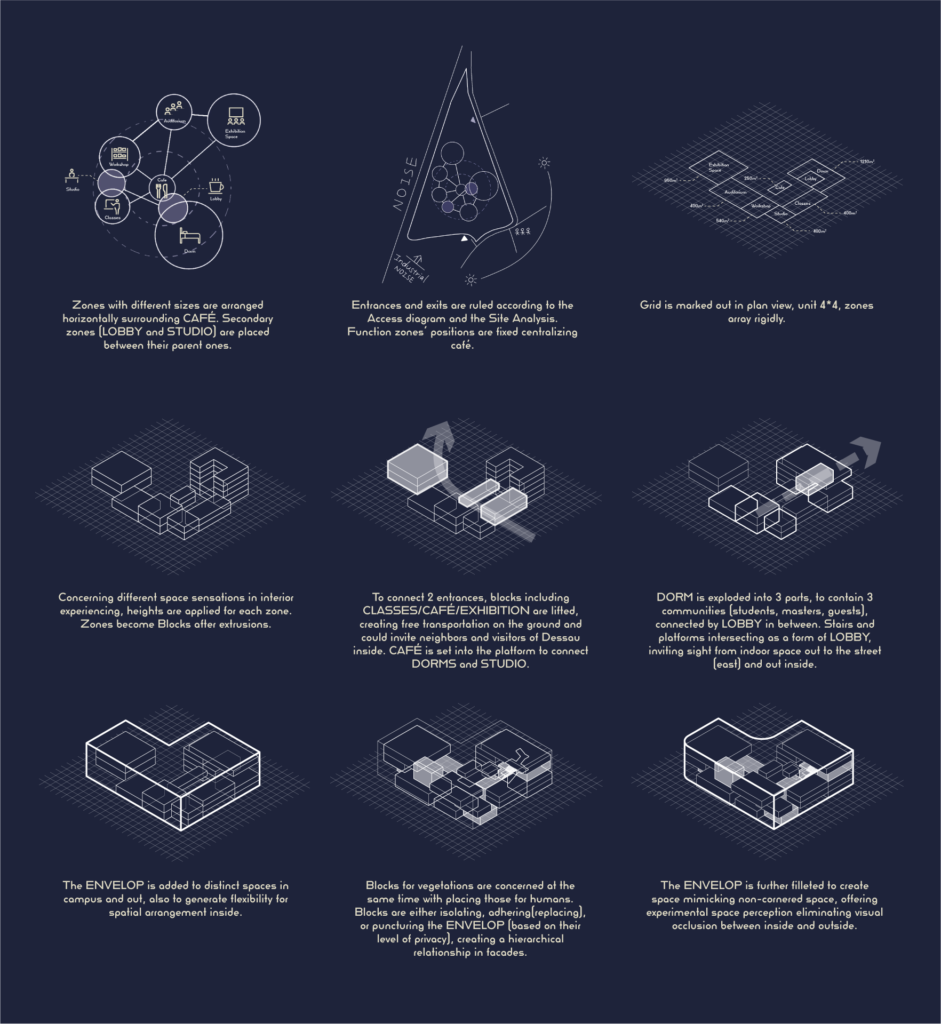 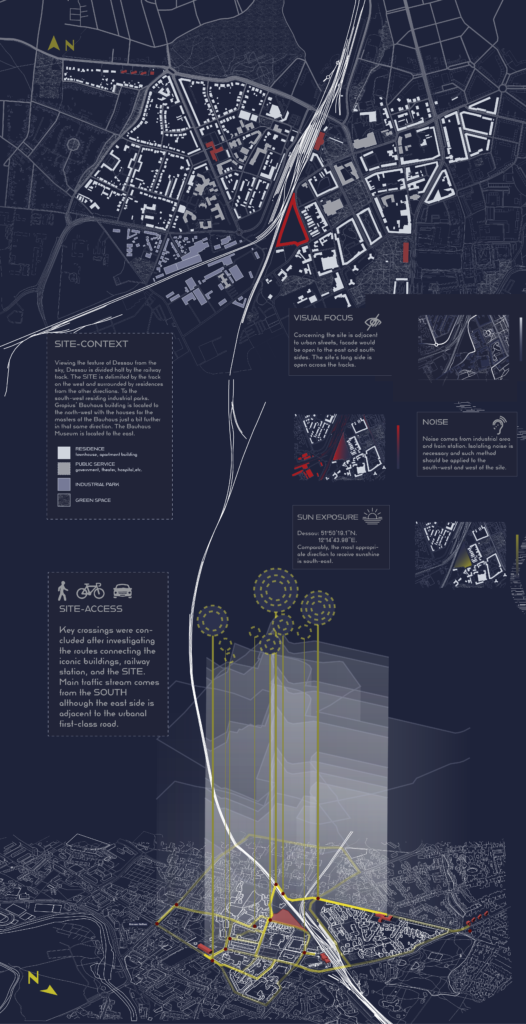