The Nexus by LockedIn Studio 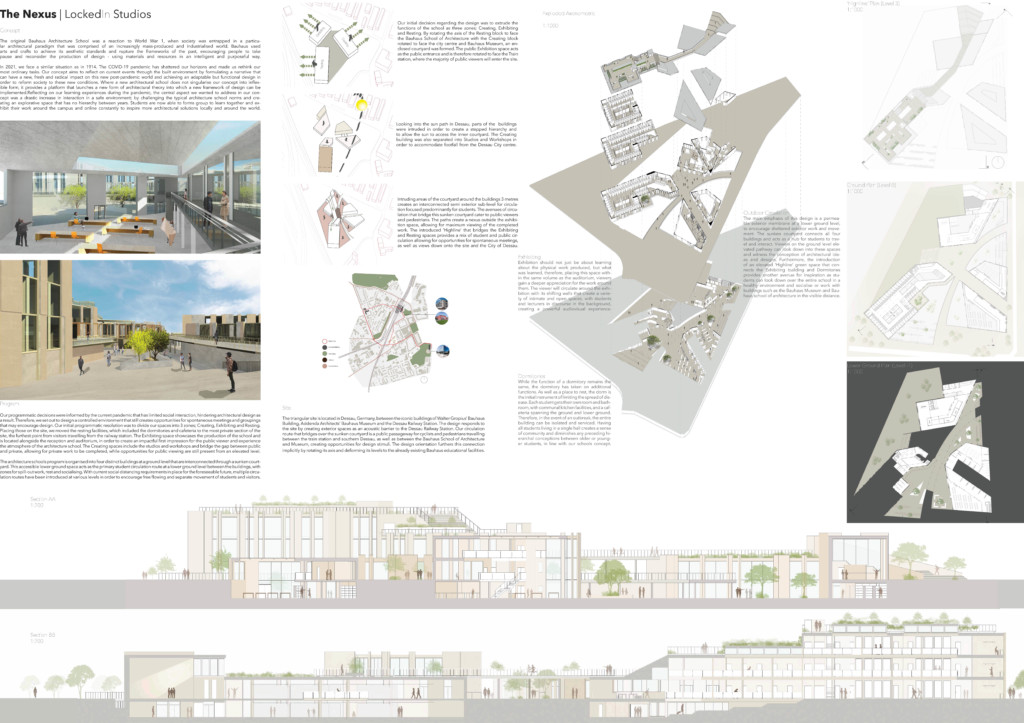 The original Bauhaus Architecture School was a reaction to World War 1, when society was entrapped in a particular architectural paradigm that was comprised of an increasingly mass-produced and industrialised world. Bauhaus used arts and crafts to achieve its aesthetic standards and rupture the frameworks of the past, encouraging people to take pause and reconsider the production of design – using materials and resources in an intelligent and purposeful way.

In 2021, we face a similar situation as in 1914. The COVID-19 pandemic has shattered our horizons and made us rethink our most ordinary tasks. Our concept aims to reflect on current events through the built environment by formulating a narrative that can have a new, fresh and radical impact on this new post-pandemic world and achieving an adaptable but functional design in order to reform society to these new conditions. Where a new architectural school does not singularise our concept into inflexible form, it provides a platform that launches a new form of architectural theory into which a new framework of design can be implemented.Reflecting on our learning experiences during the pandemic, the central aspect we wanted to address in our concept was a drastic increase in interaction in a safe environment; by challenging the typical architecture school norms and creating an explorative space that has no hierarchy between years. Students are now able to forms group to learn together and exhibit their work around the campus and online constantly to inspire more architectural solutions locally and around the world.

Our programmatic decisions were informed by the current pandemic that has limited social interaction, hindering architectural design as a result. Therefore, we set out to design a controlled environment that still creates opportunities for spontaneous meetings and groupings that may encourage design. Our initial programmatic resolution was to divide our spaces into 3 zones; Creating, Exhibiting and Resting. Placing those on the site, we moved the resting facilities, which included the dormitories and cafeteria to the most private section of the site, the furthest point from visitors travelling from the railway station. The Exhibiting space showcases the production of the school and is located alongside the reception and auditorium, in order to create an impactful first impression for the public viewer and experience the atmosphere of the architecture school. The Creating spaces include the studios and workshops and bridge the gap between public and private, allowing for private work to be completed, while opportunities for public viewing are still present from an elevated level.

The architecture schools program is organised into four distinct buildings at a ground level that are interconnected through a sunken courtyard. This accessible lower ground space acts as the primary student circulation route at a lower ground level between the buildings, with zones for spill-out work, rest and socialising. With current social distancing requirements in place for the foreseeable future, multiple circulation routes have been introduced at various levels in order to encourage free flowing and separate movement of students and visitors.

Our initial decision regarding the design was to extrude the functions of the school as three zones; Creating, Exhibiting and Resting. By rotating the axis of the Resting block to face the Bauhaus School of Architecture with the Creating block rotated to face the city centre and Bauhaus Museum, an enclosed courtyard was formed. The public Exhibition space acts as the public entrance and is therefore rotated to face the Train station, where the majority of public viewers will enter the site.

Looking into the sun path in Dessau, parts of the  buildings were intruded in order to create a stepped hierarchy and to allow the sun to access the inner courtyard. The Creating building was also separated into Studios and Workshops in order to accommodate footfall from the Dessau City centre.

Intruding areas of the courtyard around the buildings 3 metres creates an interconnected semi exterior sub-level for circulation focused predominantly for students. The avenues of circulation that bridge this sunken courtyard cater to public viewers and pedestrians. The paths create a nexus outside the exhibition space, allowing for maximum viewing of the completed work. The introduced ‘Highline’ that bridges the Exhibiting and Resting spaces provides a mix of student and public circulation allowing for opportunities for spontaneous meetings, as well as views down onto the site and the City of Dessau.

The triangular site is located in Dessau, Germany, between the iconic buildings of Walter Gropius’ Bauhaus Building, Addenda Architects’ Bauhaus Museum and the Dessau Railway Station. The design responds to the site by creating exterior spaces as an acoustic barrier to the Dessau Railway Station. Our circulation route that bridges over the sunken courtyard is a public passageway for cyclists and pedestrians travelling between the train station and southern Dessau, as well as between the Bauhaus School of Architecture and Museum, creating opportunities for design stimuli. The design orientation furthers this connection implicitly by rotating its axis and deforming its levels to the already existing Bauhaus educational facilities.

While the function of a dormitory remains the same, the dormitory has taken on additional functions. As well as a place to rest, the dorm is the initial instrument of limiting the spread of disease. Each student gets their own room and bathroom, with communal kitchen facilities, and a cafeteria spanning the ground and lower ground. Therefore, in the event of an outbreak, the entire building can be isolated and serviced. Having all students living in a single hall creates a sense of community and diminishes any preceding hierarchal conceptions between older or younger students, in line with our schools concept.

The main emphasis of this design is a permeable exterior membrane at a lower ground level, to encourage sheltered exterior work and movement. The sunken courtyard connects all four buildings and acts as a hub for students to travel and interact. Viewers on the ground level elevated pathway can look down into these spaces and witness the conception of architectural ideas and designs. Furthermore, the introduction of an elevated ‘Highline’ green space that connects the Exhibiting building and Dormitories provides another avenue for inspiration as students can look down over the entire school in a healthy environment and socialise or work with buildings such as the Bauhaus Museum and Bauhaus school of architecture in the visible distance.

Exhibition should not just be about learning about the physical work produced, but what was learned, therefore, placing this space within the same volume as the auditorium, viewers gain a deeper appreciation for the work around them. The viewer will circulate around the exhibition with its shifting walls that create a variety of intimate and open spaces, with students and lecturers in discourse in the background, creating a powerful audiovisual experience.

A school of architecture is defined by its studios and exhibition spaces, therefore our focus was to design these facilities with transparency into workspaces, at nexuses of circulation routes and allow for free, constant viewing of work in its various stages in order to foster inspiration. The studios and workshops are predominantly lower ground large open spaces in order to facilitate the school’s ethos of no hierarchy between years. Zoning is therefore important in such large spaces in order to create more intimate spaces for individuals or small groups to work.  These more controlled spaces, such as the tutorial rooms, are situated on the ground floor and are designed with AD-APT walls that are attached to ceiling rails, allowing for the room sizes to shift and accommodate groups of any size. 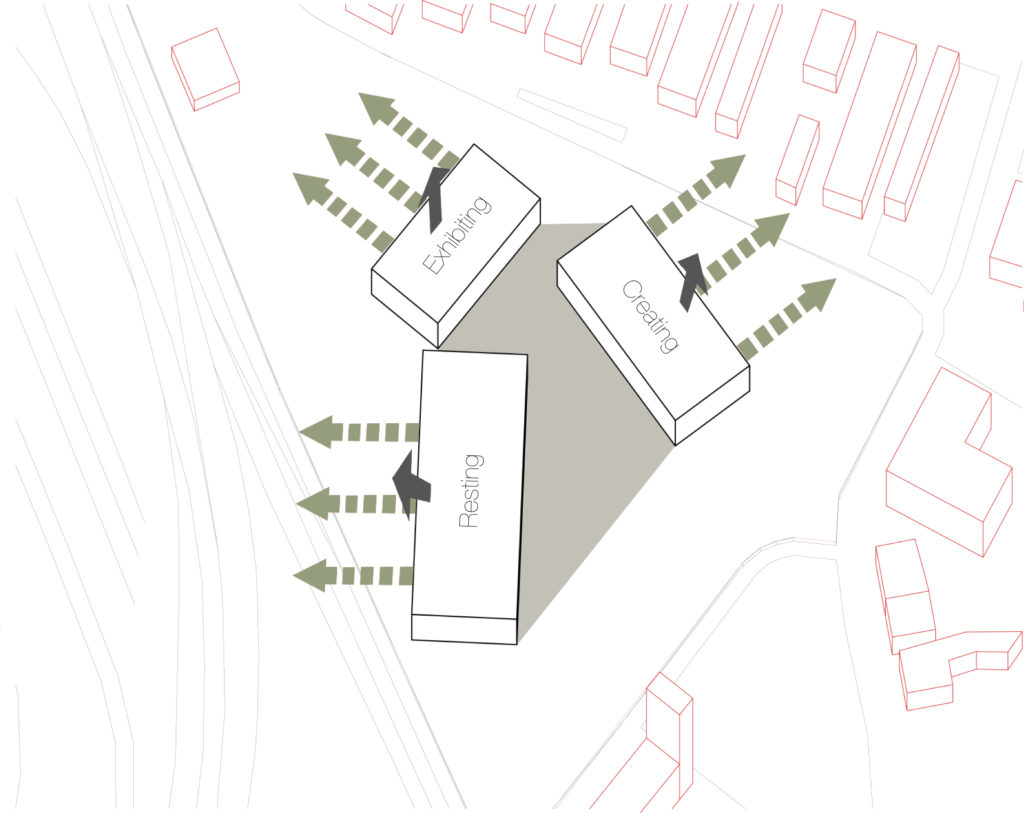 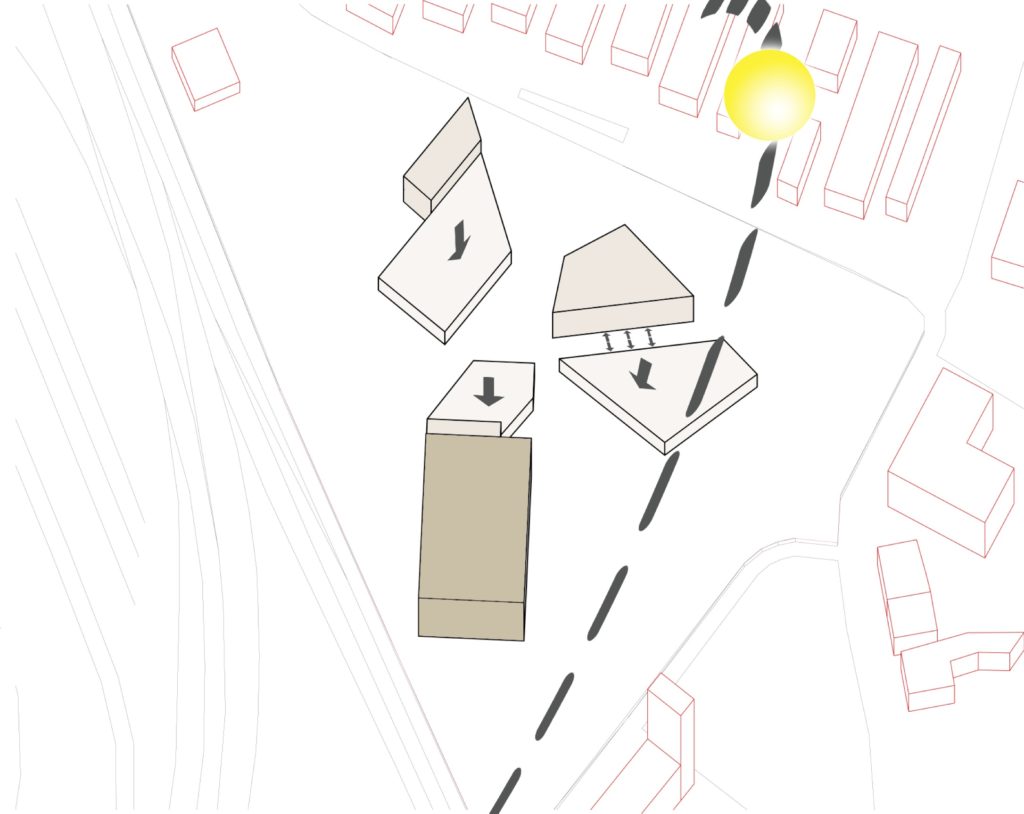 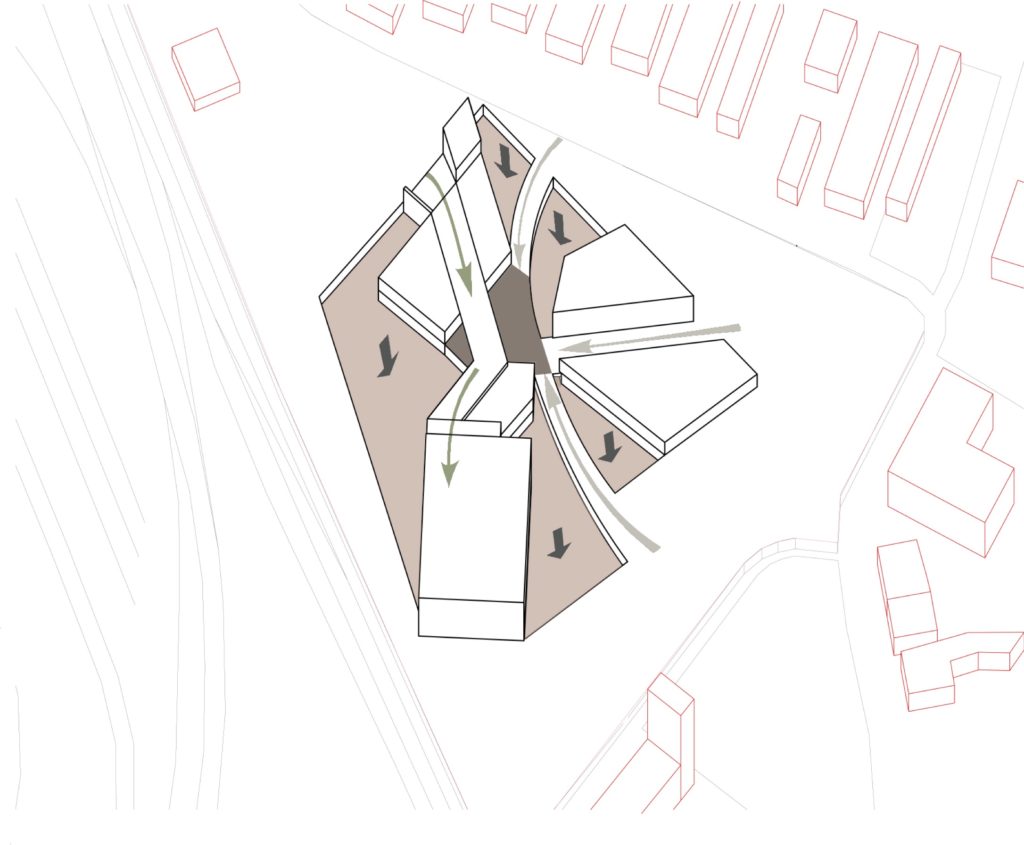 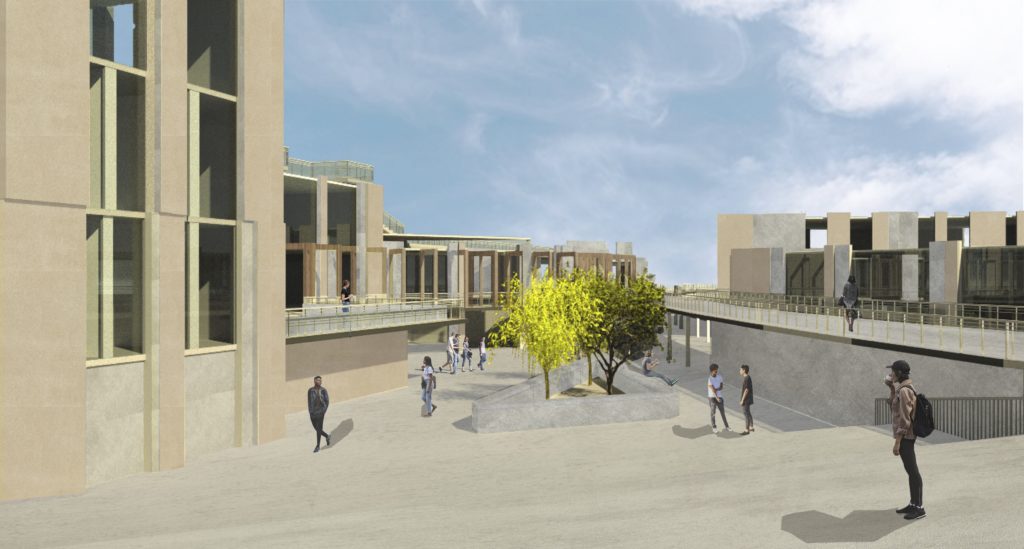 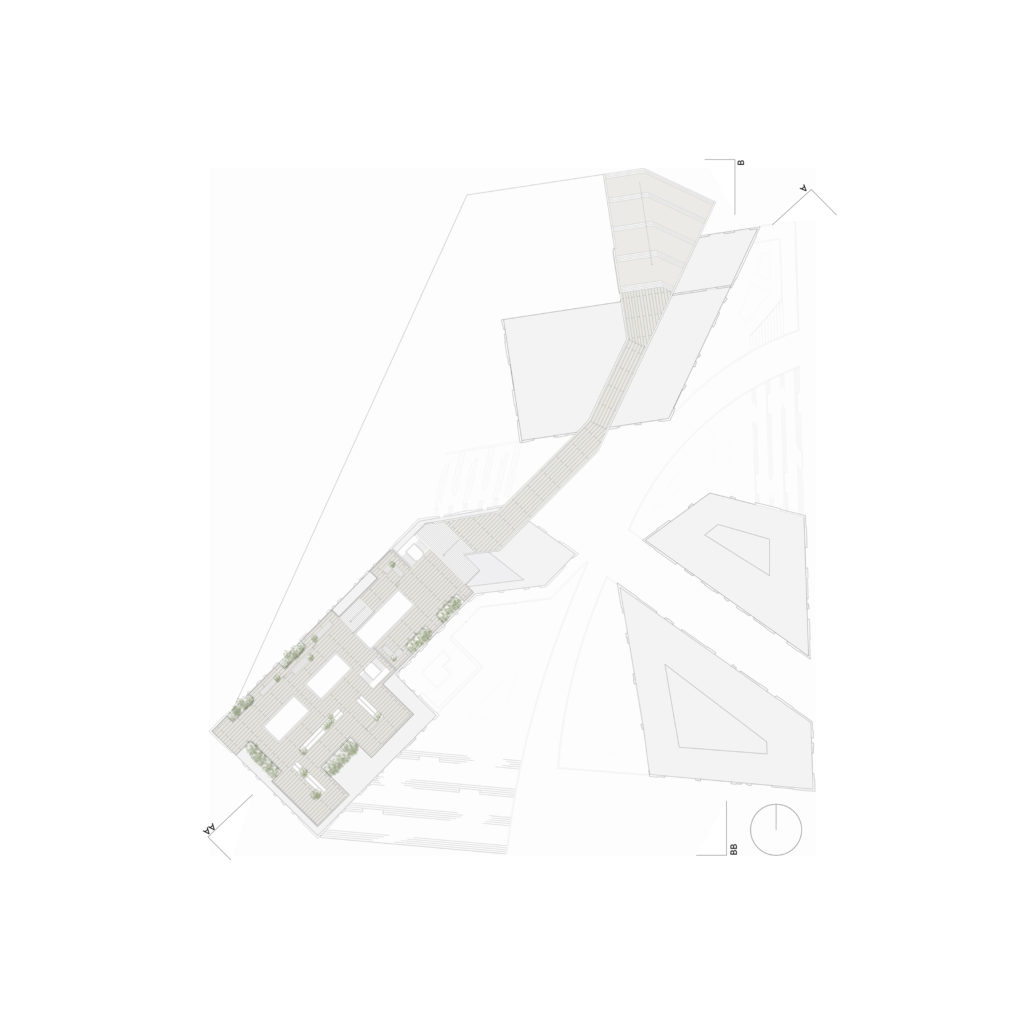 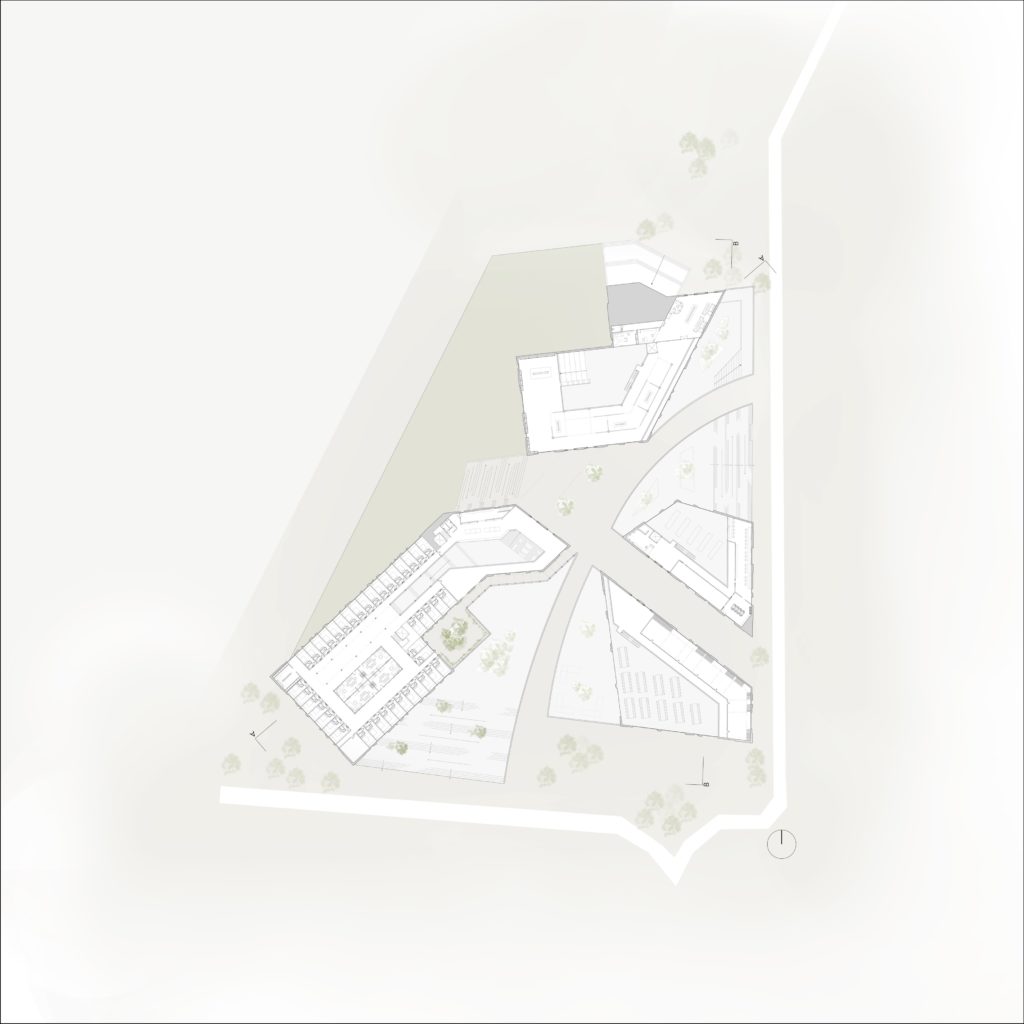 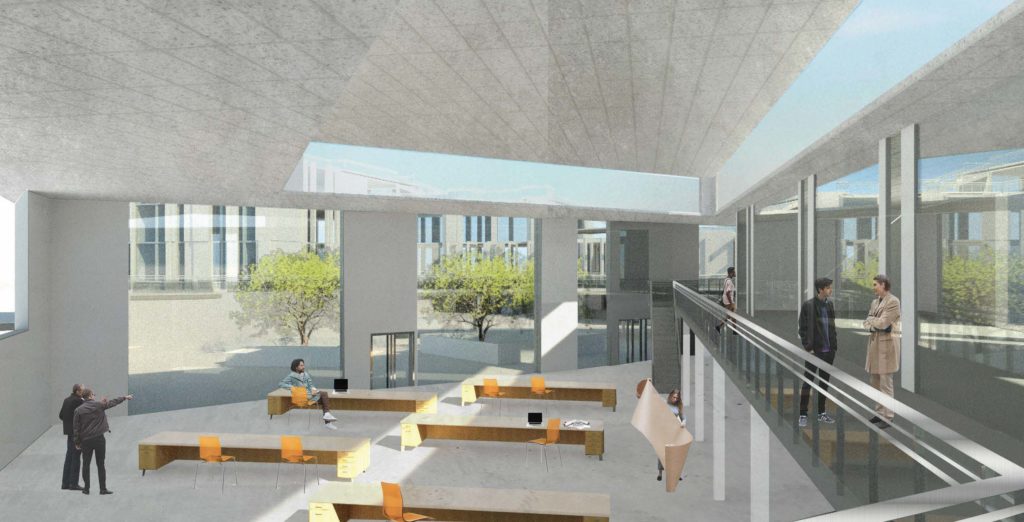 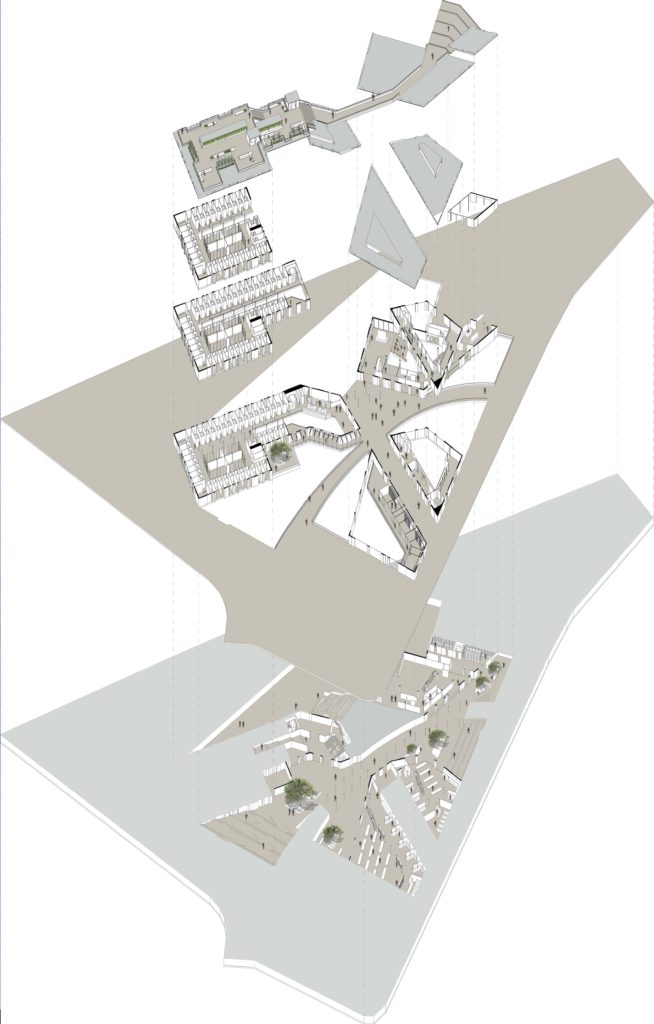 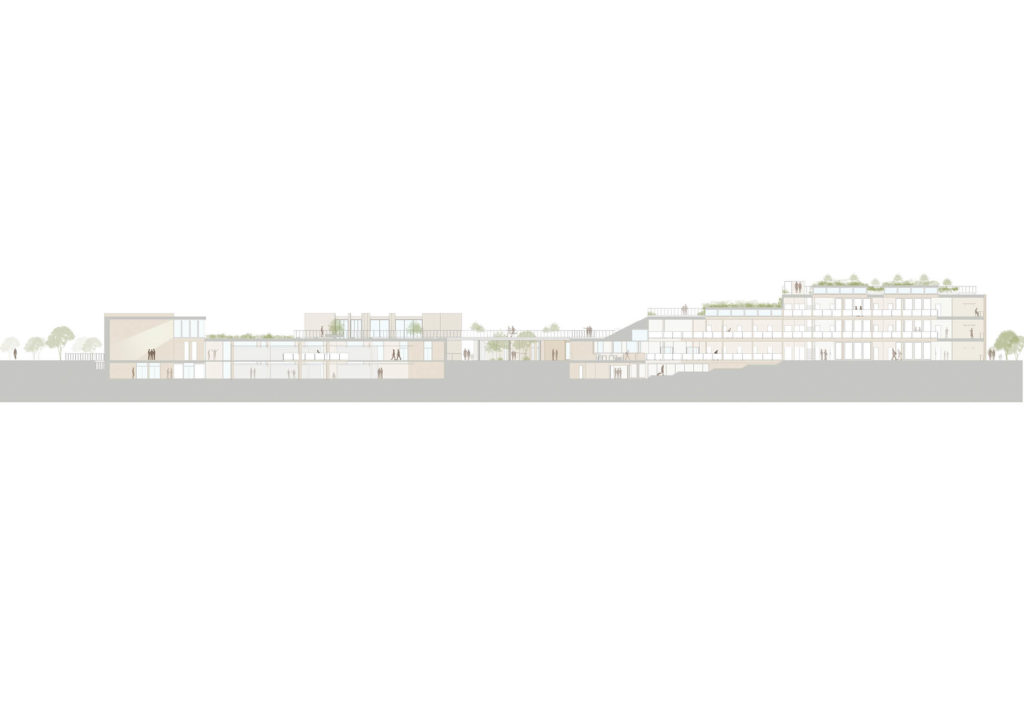 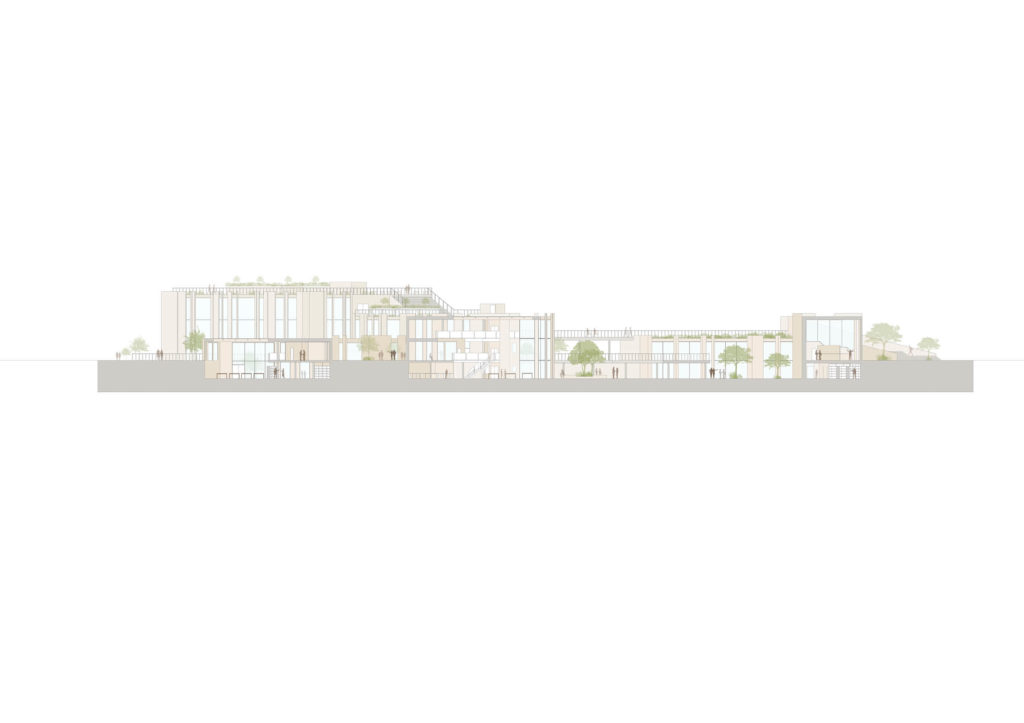