“The Artery of Bauhaus” by molbertan 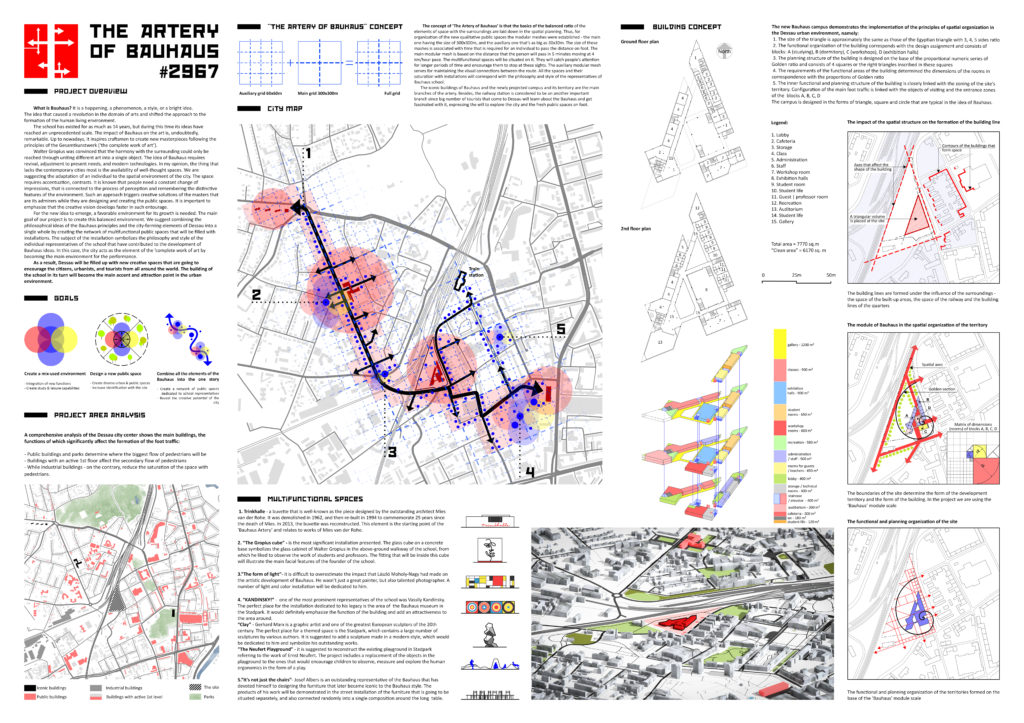 What is Bauhaus? It is a happening, a phenomenon, a style, or a bright idea. The idea that caused a revolution in the domain of arts and shifted the approach to the formation of the human living environment. The school has existed for as much as 14 years, but during this time its ideas have reached an unprecedented scale. The impact of Bauhaus on the art is, undoubtedly, remarkable. Up to nowadays, it inspires craftsmen to create new masterpieces following the principles of the Gesamtkunstwerk (‘the complete work of art’). Walter Gropius was convinced that the harmony with the surrounding could only be reached through uniting different art into a single object. The idea of Bauhaus requires revival, adjustment to present needs, and modern technologies. In my opinion, the thing that lacks the contemporary cities most is the availability of well-thought spaces. We are suggesting the adaptation of an individual to the spatial environment of the city. The space requires accentuation, contrasts. It is known that people need a constant change of impressions, that is connected to the process of perception and remembering the distinctive features of the environment. Such an approach triggers creative solutions of the masters that are its admirers while they are designing and creating the public spaces. It is important to emphasize that the creative vision develops faster in such entourage. For the new idea to emerge, a favorable environment for its growth is needed. The main goal of our project is to create this balanced environment. We suggest combining the philosophical ideas of the Bauhaus principles and the city-forming elements of Dessau into a single whole by creating the network of multifunctional public spaces that will be filled with installations. The subject of the installation symbolizes the philosophy and style of the individual representatives of the school that have contributed to the development of Bauhaus ideas. In this case, the city acts as the element of the ‘complete work of art by becoming the main environment for the performance. As a result, Dessau will be filled up with new creative spaces that are going to encourage the citizens, urbanists, and tourists from all around the world. The building of the school in its turn will become the main accent and attraction point in the urban environment.

”THE ARTERY OF BAUHAUS” CONCEPT

Anton Falashtinskiy, [16.04.21 09:52]
The concept of ‘The Artery of Bauhaus’ is that the basics of the balanced ratio of the elements of space with the surroundings are laid down in the spatial planning. Thus, for organization of the new qualitative public spaces the modular meshes were established – the main one having the size of 300x300m, and the auxiliary one that’s as big as 30x30m. The size of these mashes is associated with time that is required for an individual to pass the distance on foot. The main modular mesh is based on the distance that the person will pass in 5 minutes moving at 4 km/hour pace. The multifunctional spaces will be situated on it. They will catch people’s attention for longer periods of time and encourage them to stop at these sights. The auxiliary modular mesh serves for maintaining the visual connections between the route. All the spaces and their saturation with installations will correspond with the philosophy and style of the representatives of Bauhaus school. The iconic buildings of Bauhaus and the newly projected campus and its territory are the main branches of the artery. Besides, the railway station is considered to be an another important branch since big number of tourists that come to Dessau will learn about the Bauhaus and get fascinated with it, expressing the will to explore the city and the fresh public spaces on foot.

1. Trinkhalle – a buvette that is well-known as the piece designed by the outstanding architect Mies van der Rohe. It was demolished in 1962, and then re-built in 1994 to commemorate 25 years since the death of Mies. In 2013, the buvette was reconstructed. This element is the starting point of the ‘Bauhaus Artery’ and relates to works of Mies van der Rohe.

2. “The Gropius cube” – is the most significant installation presented. The glass cube on a concrete base symbolizes the glass cabinet of Walter Gropius in the above-ground walkway of the school, from which he liked to observe the work of students and professors. The fitting that will be inside this cube will illustrate the main facial features of the founder of the school.

3.”The form of light”- it is difficult to overestimate the impact that László Moholy-Nagy had made on the artistic development of Bauhaus. He wasn’t just a great painter, but also talented photographer. A number of light and color installation will be dedicated to him.

4. “KANDINSKY!” – one of the most prominent representatives of the school was Vassily Kandinsky. The perfect place for the installation dedicated to his legacy is the area of the Bauhaus museum in the Stadpark. It would definitely emphasize the function of the building and add an attractiveness to the area around. “Clay” – Gerhard Marx is a graphic artist and one of the greatest European sculptors of the 20th century. The perfect place for a themed space is the Stadpark, which contains a large number of sculptures by various authors. It is suggested to add a sculpture made in a modern style, which would be dedicated to him and symbolize his outstanding works. “The Neufert Playground” – it is suggested to reconstruct the existing playground in Stadpark referring to the work of Ernst Neufert. The project includes a replacement of the objects in the playground to the ones that would encourage children to observe, measure and explore the human ergonomics in the form of a play.

5.”It’s not just the chairs”- Josef Albers is an outstanding representative of the Bauhaus that has devoted himself to designing the furniture that later became iconic to the Bauhaus style. The products of his work will be demonstrated in the street installation of the furniture that is going to be situated separately, and also connected randomly into a single composition around the long table.

Anton Falashtinskiy, [16.04.21 09:52]
The new Bauhaus campus demonstrates the implementation of the principles of spatial organization in the Dessau urban environment, namely: 1. The size of the triangle is approximately the same as those of the Egyptian triangle with 3, 4, 5 sides ratio 2. The functional organization of the building corresponds with the design assignment and consists of blocks: A (studying), B (dormitory), C (workshops), D (exhibition halls) 3. The planning structure of the building is designed on the base of the proportional numeric series of Golden ratio and consists of 4 squares or the right triangles inscribed in these squares 4. The requirements of the functional areas of the building determined the dimensions of the rooms in correspondence with the proportions of Golden ratio 5. The inner functional and planning structure of the building is closely linked with the zoning of the site’s territory. Configuration of the main foot traffic is linked with the objects of visiting and the entrance zones of the blocks A, B, C, D The campus is designed in the forms of triangle, square and circle that are typical in the idea of Bauhaus.

The module of Bauhaus in the spatial organization of the territory

The functional and planning organization of the site 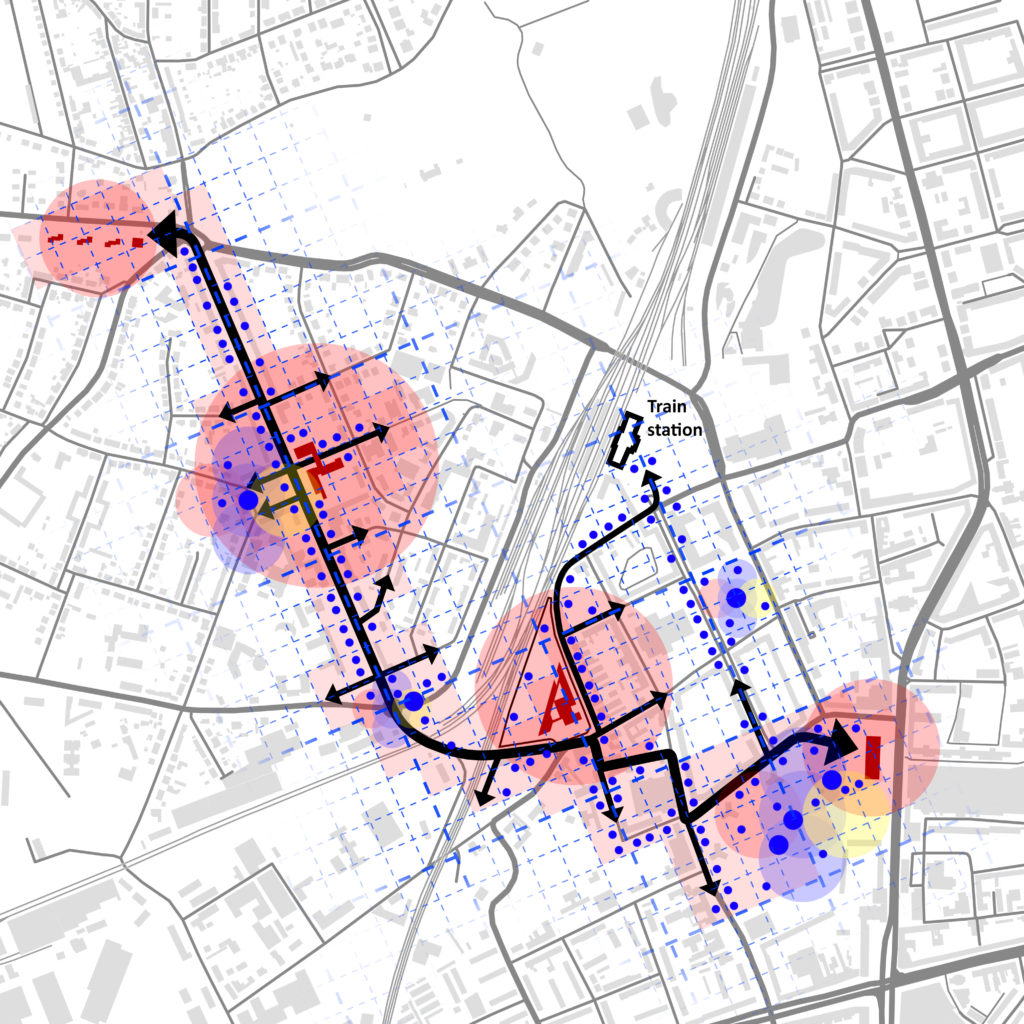