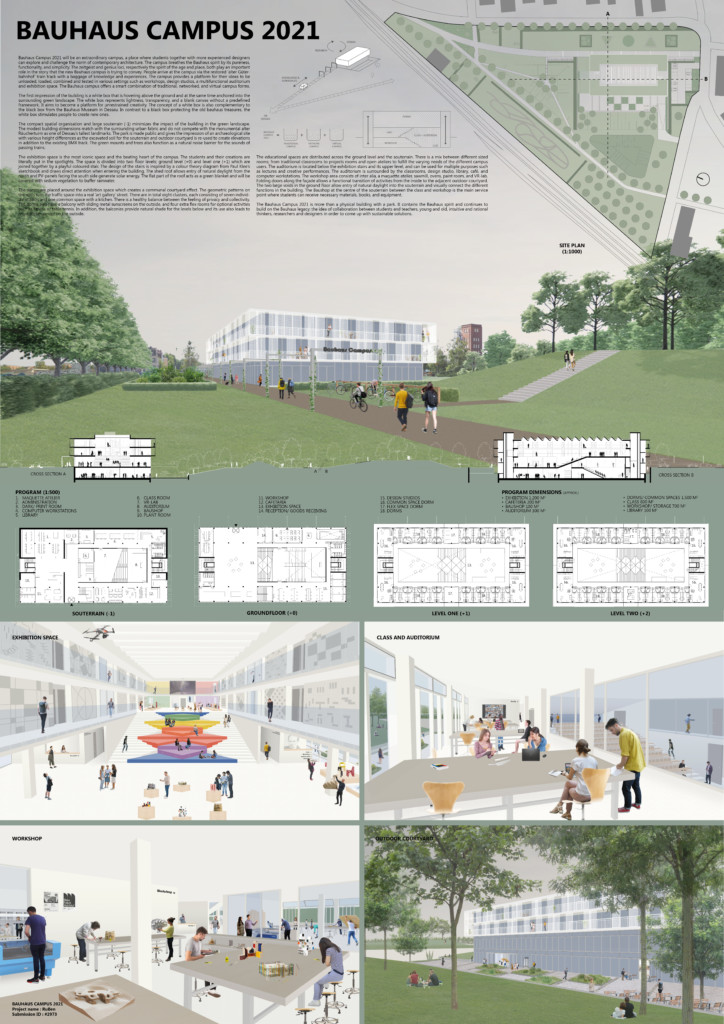 Bauhaus Campus 2021 will be an extraordinary campus, a place where students together with more experienced designers can explore and challenge the norm of contemporary architecture. The campus breathes the Bauhaus spirit by its pureness, functionality, and simplicity. The zeitgeist and genius loci, respectively the spirit of the age and place, both play an important role in the story that the new Bauhaus campus is trying to convey. People arrive at the campus via the restored ‘alter Güterbahnhof’ train track with a baggage of knowledge and experiences. The campus provides a platform for their ideas to be unloaded, loaded, combined and tested in various settings such as workshops, design studios, a multifunctional auditorium and exhibition space. The Bauhaus campus offers a smart combination of traditional, networked, and virtual campus forms.

The first impression of the building is a white box that is hovering above the ground and at the same time anchored into the surrounding green landscape. The white box represents lightness, transparency, and a blank canvas without a predefined framework. It aims to become a platform for unrestrained creativity. The concept of a white box is also complementary to the black box from the Bauhaus Museum in Dessau. In contrast to a black box protecting the old bauhaus treasures, the white box stimulates people to create new ones.

The compact spatial organisation and large souterrain (-1) minimizes the impact of the building in the green landscape. The modest building dimensions match with the surrounding urban fabric and do not compete with the monumental alter Räucherturm as one of Dessau’s tallest landmarks. The park is made public and gives the impression of an archaeological site with various height differences as the excavated soil for the souterrain and outdoor courtyard is re-used to create elevations in addition to the existing BMX track. The green mounts and trees also function as a natural noise barrier for the sounds of passing trains.

The exhibition space is the most iconic space and the beating heart of the campus. The students and their creations are literally put in the spotlights. The space is divided into two floor levels; ground level (+0) and level one (+1) which are joined together by a playful coloured stair. The design of the stairs is inspired by a colour theory diagram from Paul Klee’s sketchbook and draws direct attention when entering the building. The shed roof allows entry of natural daylight from the north and PV-panels facing the south side generate solar energy. The flat part of the roof acts as a green blanket and will be covered with sedum vegetation to buffer rainwater.

The dorms are placed around the exhibition space which creates a communal courtyard effect. The geometric patterns on the walls turn the traffic space into a real ‘art gallery’ street. There are in total eight clusters, each consisting of seven individual studios and one common space with a kitchen. There is a healthy balance between the feeling of privacy and collectivity. The dorms also have a balcony with sliding metal sunscreens on the outside, and four extra flex rooms for optional activities such as fitness or table tennis. In addition, the balconies provide natural shade for the levels below and its use also leads to more social control on the outside.

The educational spaces are distributed across the ground level and the souterrain. There is a mix between different sized rooms; from traditional classrooms to projects rooms and open ateliers to fulfill the varying needs of the different campus users. The auditorium is located below the exhibition stairs and its upper level, and can be used for multiple purposes such as lectures and creative performances. The auditorium is surrounded by the classrooms, design studio, library, café, and computer workstations. The workshop area consists of inter alia, a maquette atelier, sawmill, ovens, paint room, and VR-lab. Folding doors along the façade allows a functional transition of activities from the inside to the adjacent outdoor courtyard. The two large voids in the ground floor allow entry of natural daylight into the souterrain and visually connect the different functions in the building. The Baushop at the centre of the souterrain between the class and workshop is the main service point where students can receive necessary materials, books, and equipment.

The Bauhaus Campus 2021 is more than a physical building with a park. It contains the Bauhaus spirit and continues to build on the Bauhaus legacy; the idea of collaboration between students and teachers, young and old, intuitive and rational thinkers, researchers and designers in order to come up with sustainable solutions. 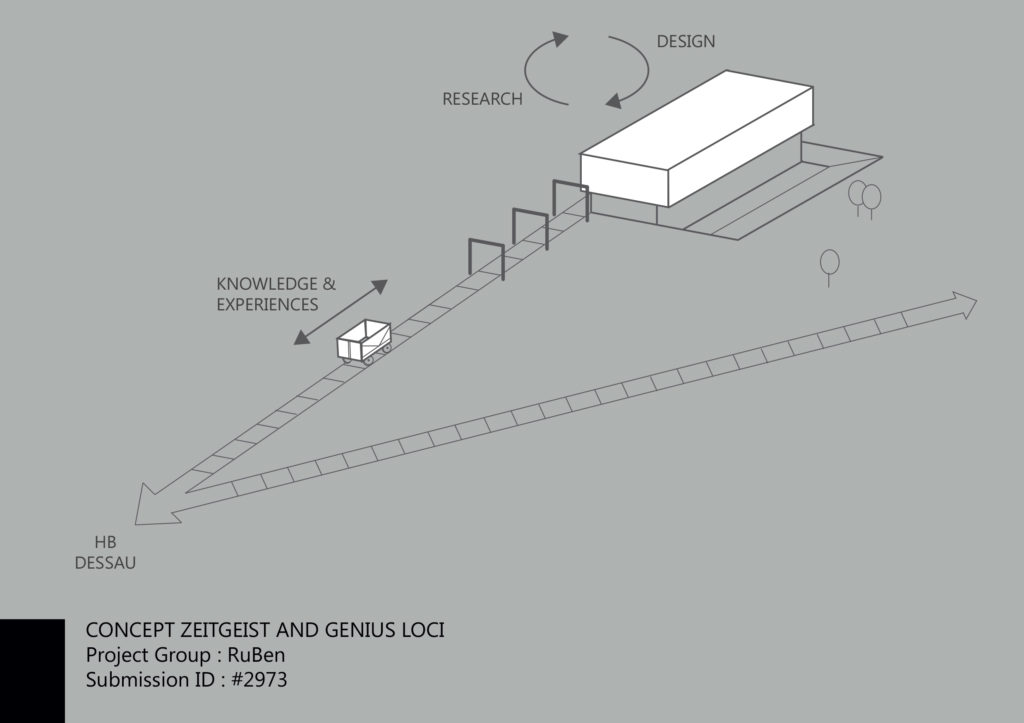 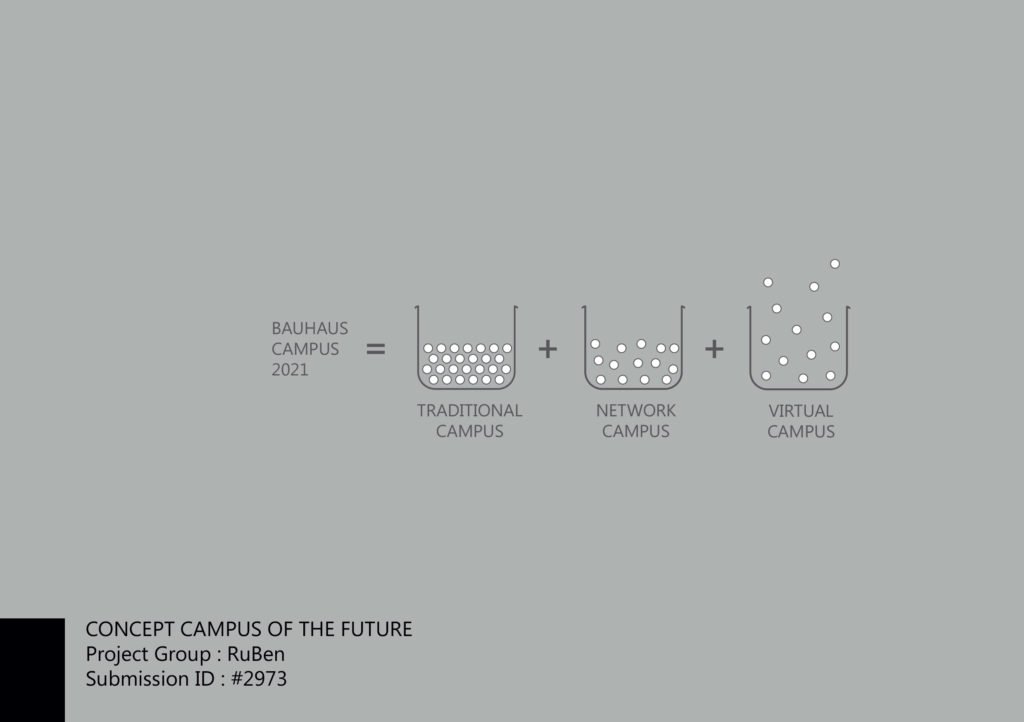 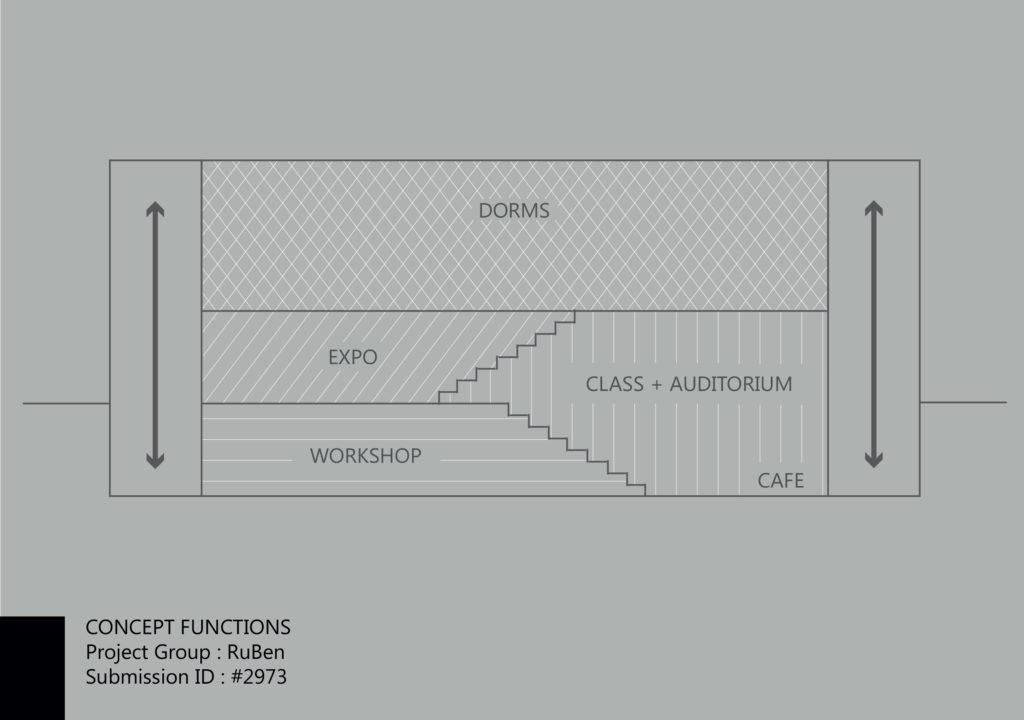 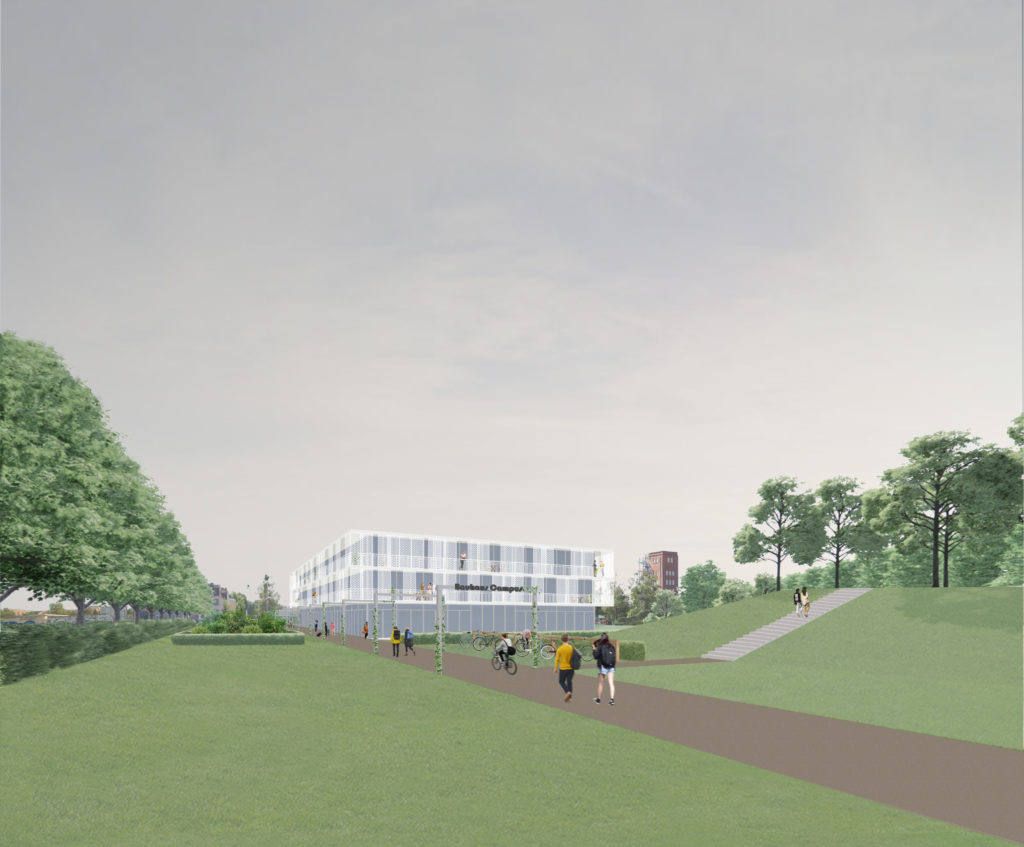 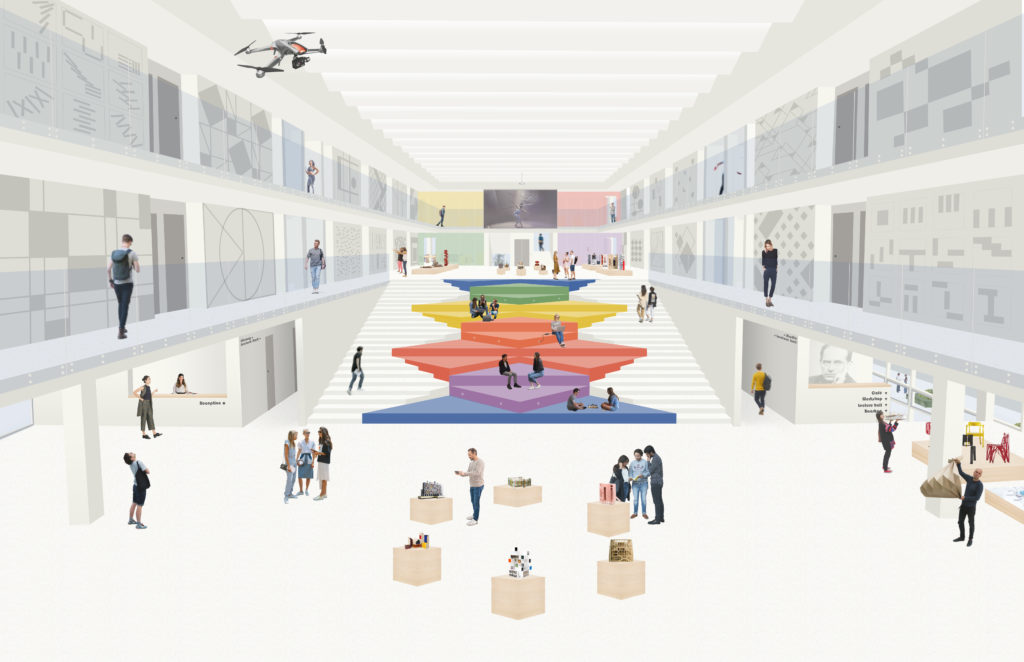 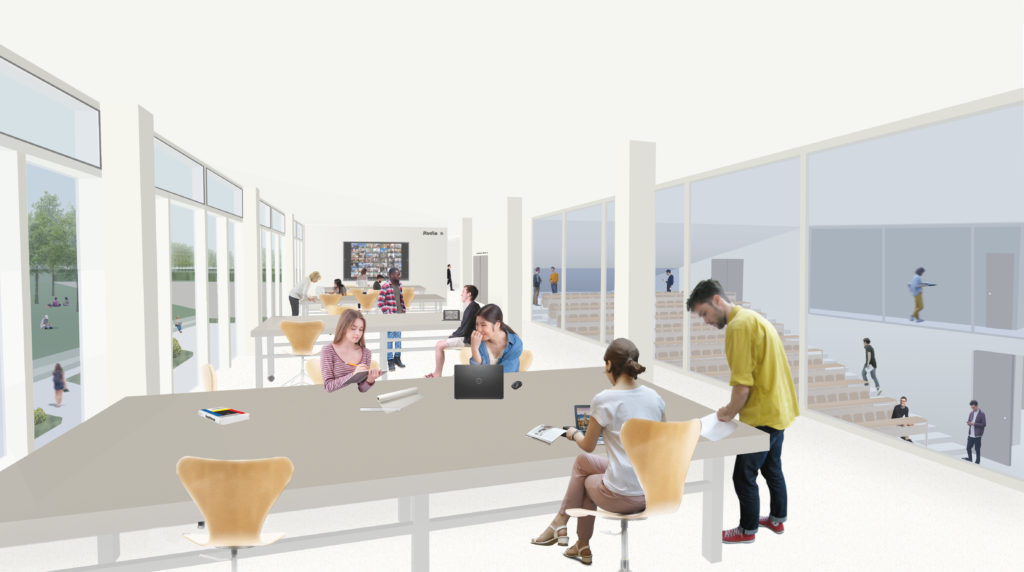 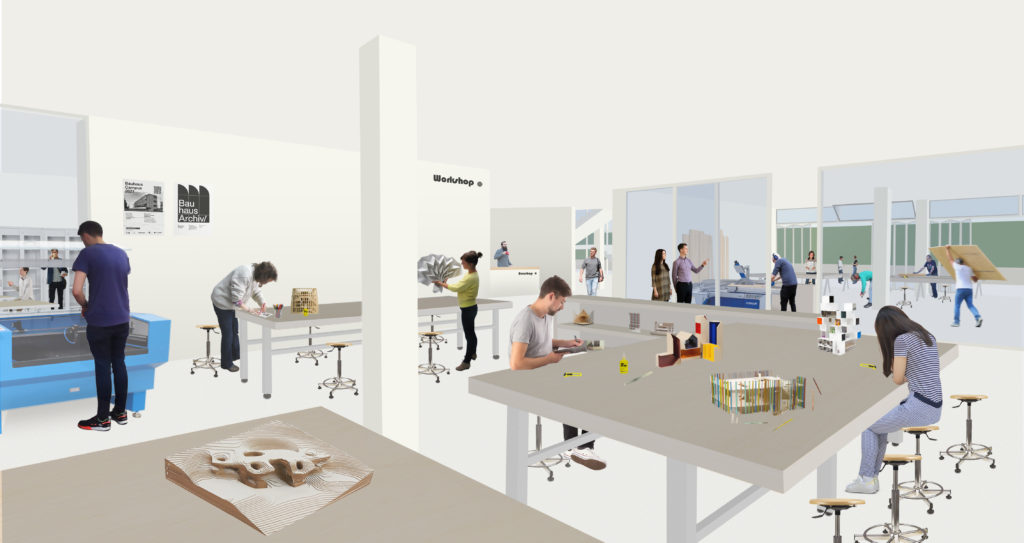 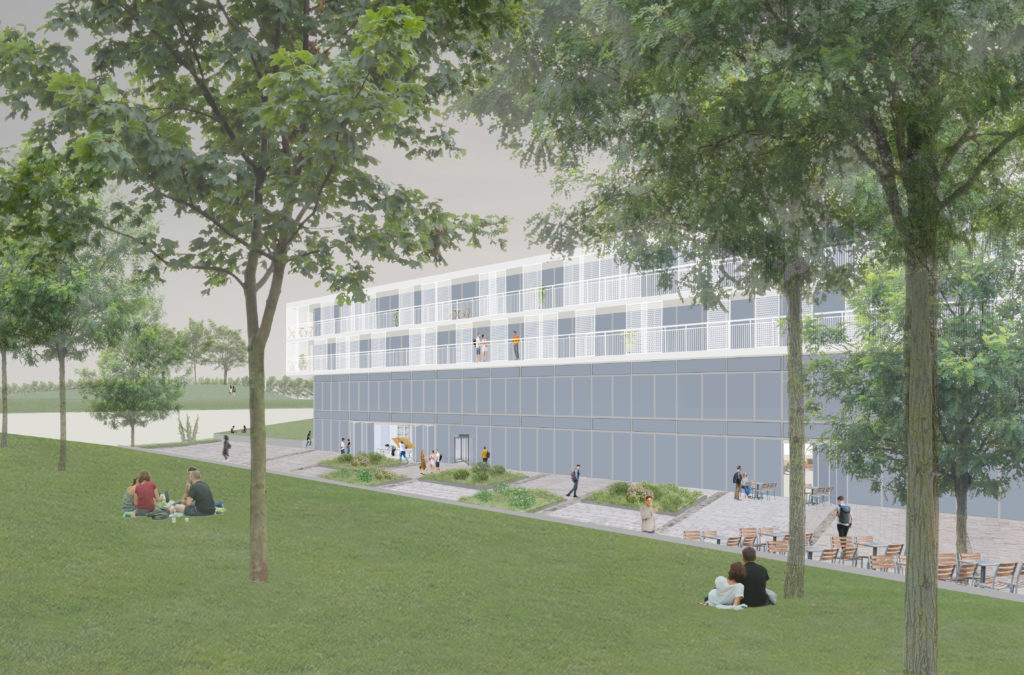 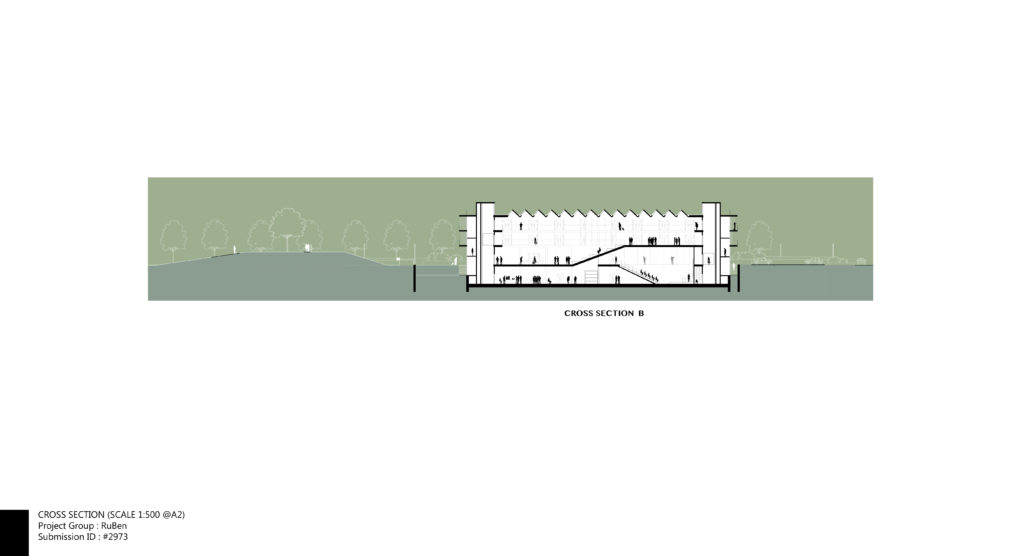 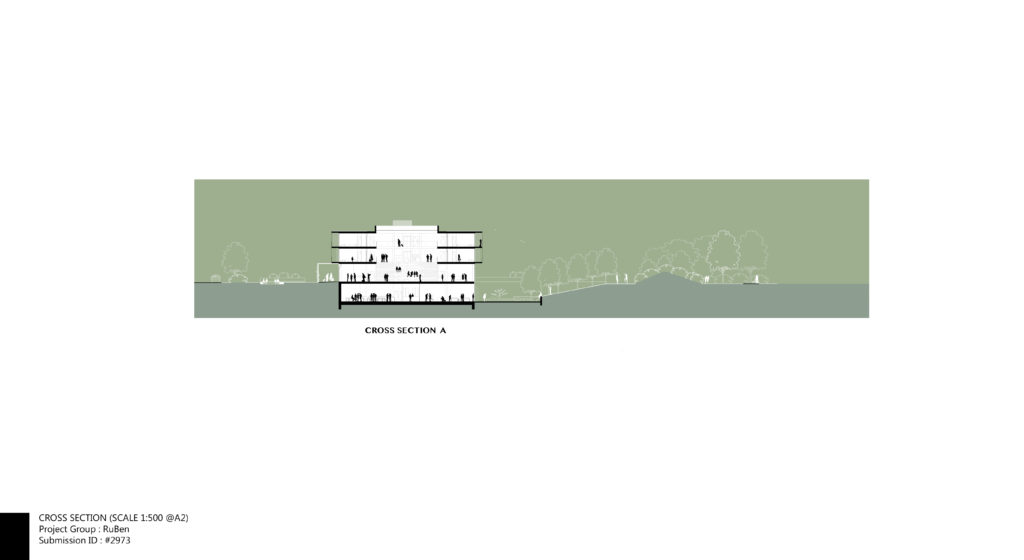 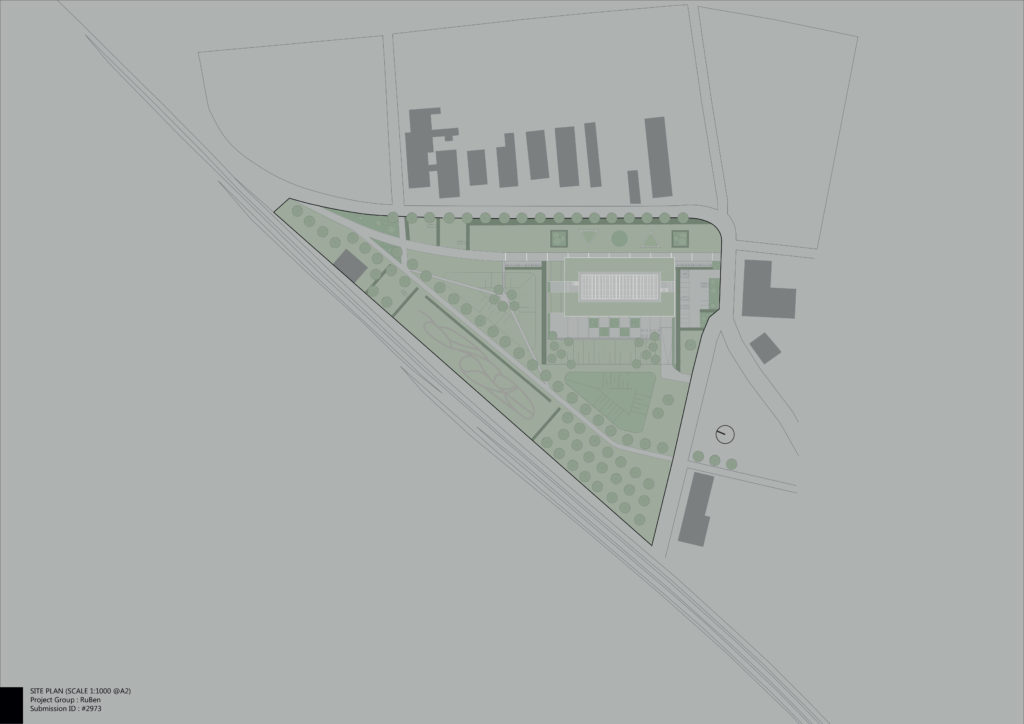 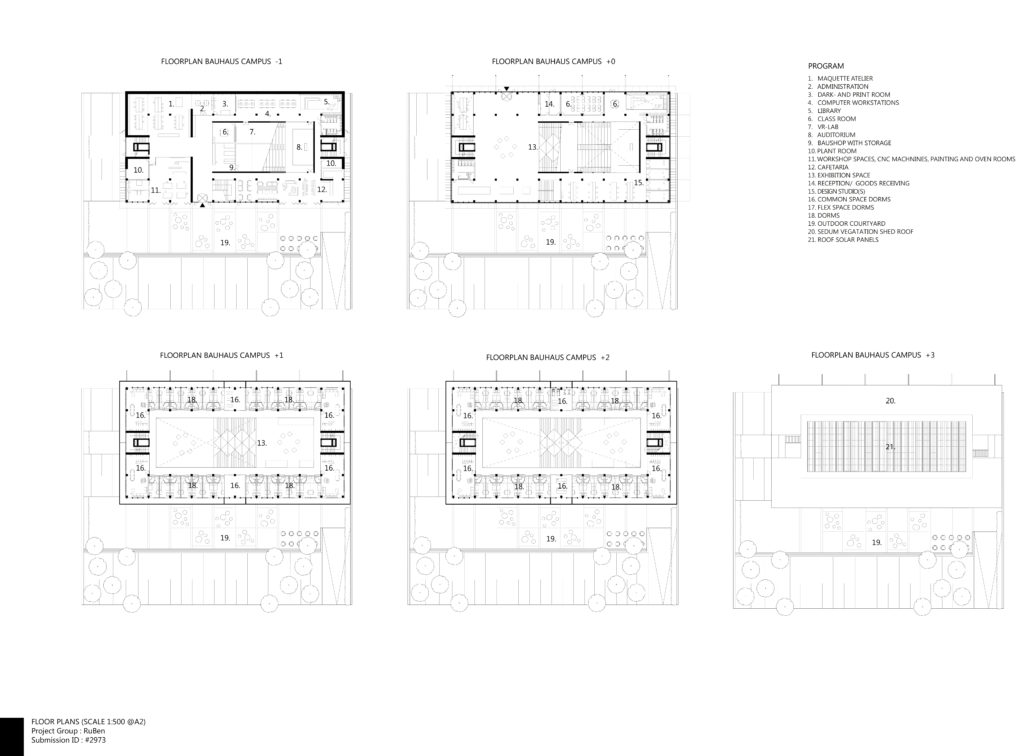