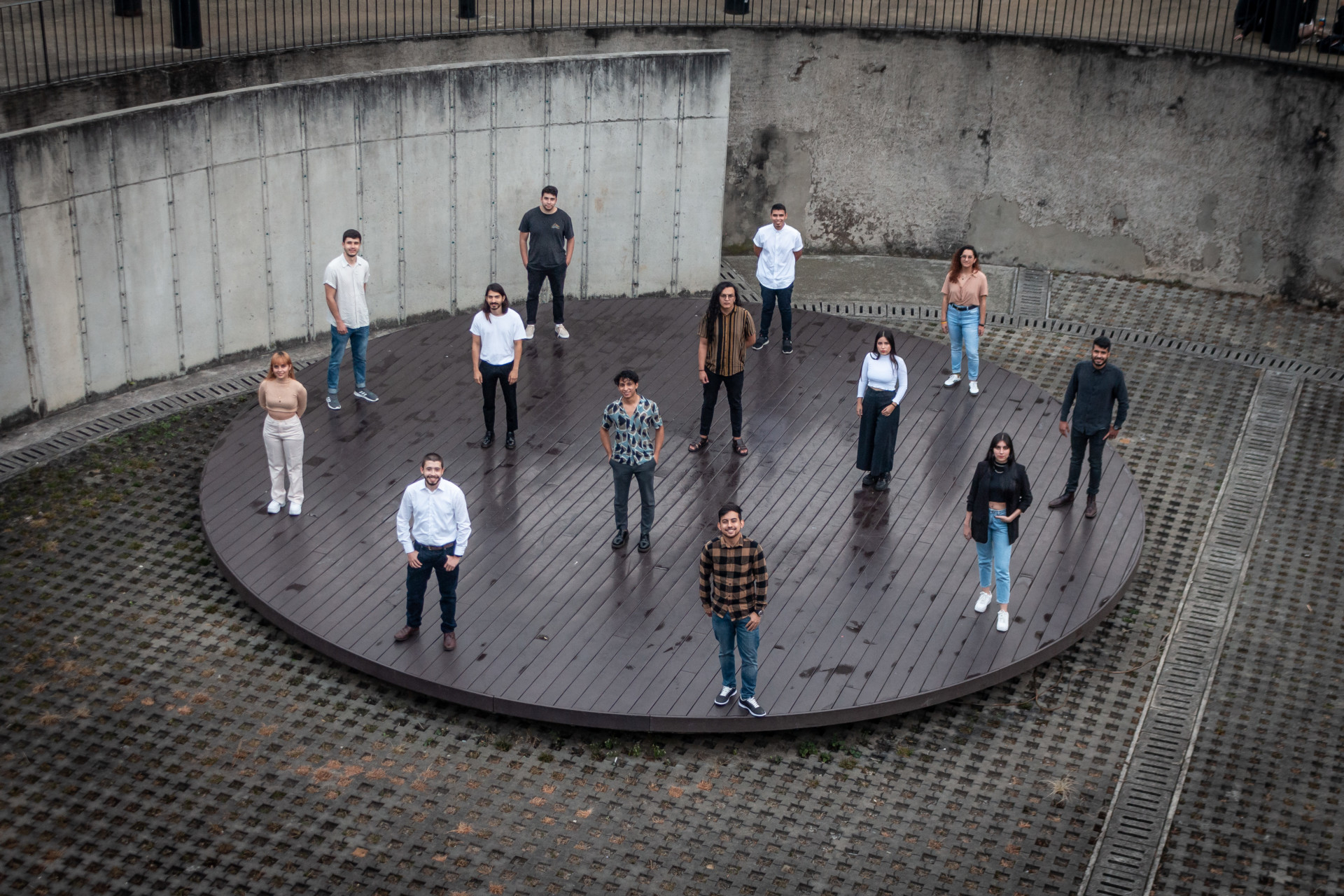 COLECTIVO 24 is a group of 14 students (yes, you’ve read that right, fourteen) from the Colombia´s National University of Medellin, who after being awarded an Honorable Mention at the Bauhaus Campus 2021 competition, decided to establish themselves as a studio and started taking on professional commissions.

Architects are often associated with strong personalities and big egos, which makes it hard to work in teams. This is not to say architecture isn’t a collective effort, it most certainly is, but in most cases studios are formed by a charismatic leader with a strong team behind him/her, or is some rare cases a small group of leading figures, who somehow found the way to work together and complement each other.

COLECTIVO 24 is here to challenge that conception, and after having the opportunity to chat with some of their members we believe they have a strong shot a succeeding.

Since the Bauhaus Campus 2021 brief only allowed teams of up to 8 students to participate, the first decision COLECTIVO 24 took was to divide themselves in two groups and work on two different projects. One of their proposals was awarded an Honorable Mention, while the other one wasn’t selected amongst the finalists, yet COLECTIVO 24 took the victory as a team, regardless of who was involved in either of the two proposals, showing a level of trust and commitment to their group that’s certainly admirable.

The beginings of COLECTIVO 24

Their story began 5 years ago, when they were all freshmen at the Colombia’s National University of Medellín. In a school that encourages teamwork from day one, Jair, Steven, Dayanna, Juan Pablo, Mariana, Santiago, Camilo, Juan Esteban, David, Valentina, Evelyn, Anderson, Daniel y Mateo quickly realized how much they had in common and became close friends, but also working partners. Together they moved from freshmen year to sophomores, juniors and finally seniors, sometimes working all together, others in smaller groups, but always moving on as a team.

During this evolution they got to know each other well, and as their student life approached its end, they shared their ideas and their visions for the future, which brought them even closer together. Over time they had developed their own working processes and methods, which allow them to communicate their ideas assertively and were everyone’s opinions are heard and considered. Their methods work because they were never imposed, they are built on trust and respect for each other, and in the believe that they all want to achieve a common goal, which is to create a coherent, critical and reflective architecture that goes beyond form and image. An architecture that’s social, inclusive, and serves the community that it’s built for.

Staying true to that vision while designing for a city as different to Medellín as Dessau was one of the main challenges they faced during this exercise. With most member of the team never having visited a city that could even resemble Dessau, how could they possible create a critical and reflective proposal to serve a community they had never met? The answer is simple, sticking to their methods. First they contacted some friends living in Switzerland (not quite Germany, but as close as they could get) to learn firsthand how it’s like to live in a medium-sized European city. Then they studied objective data such as the climate of the area, the population of the city, etc. and eventually moved on to studying the urban context.

That was the easy part. Next they faced a dilemma between what the brief was asking them to do and what they believed the new Bauhaus should be. A situation that in many case could lead to arguments and disagreements, but not in their case. Following their working methodology each member of the team shared their ideas and vision, generating a debate that lasted for a few days, until finally, they all agreed on which was the direction to follow (well, not all of them, as this was done separately in two different instances, one for each of the teams they had internally formed).

Up until this point each team had worked together, raising questions and finding answers as a team. However, one of the advantages of having a large team is having access to a very diverse set of skills, and at this point it was time to divide and conquer! After knowing each other for five years, COLECTIVO 24 understand what each member ads to the team and what each of them is best at. Not everyone is amazing at rendering or laying out presentations, how could they?! Instead, they understand the strengths of each member and trust them to work on what they do best, knowing that by combining their strengths they have a much better shot at solving any challenge than they would on their own.

COLECTIVO 24 worked in the academic environment, but would it work outside? That is what they set to find out when they joined the Bauhaus Campus 2021 international competition, and not only did they felt their work dynamics worked just as well, but the jury awarded one of their proposals, amongst 388 received, with an Honorable Mention!

The fourteen members of the team had already previously talked about what their relationship could be after graduation. They knew they wanted to stay close, to collaborate. They thought they could work together on research and academic matters while each of them worked at an office, but their success in the competition raised another possibility, a question they needed to answer: Could we establish our own professional practice? Once again, they started a debate and eventually decided they were. Some of the teammates already had some professional experience, as they had been working at studios while studying, the group seemed to work well outside the safe walls of their school, and what’s even more important, clients were knocking at their door!

Since making this life changing decision COLECTIVO 24 has participated in two other competitions, one of them for the WWF, and are engaged in two real life projects, the restoration of an apartment building in Bello, a suburb north of Medellín, and a 200 square meter home on a land in La Ceja, a nearby municipality.

We invite you to follow their progress on Instagram. We’ll certainly be keeping a close eye on their evolution and are eager to see the things that will come out of this unusual, but brave and charismatic group of young minds.