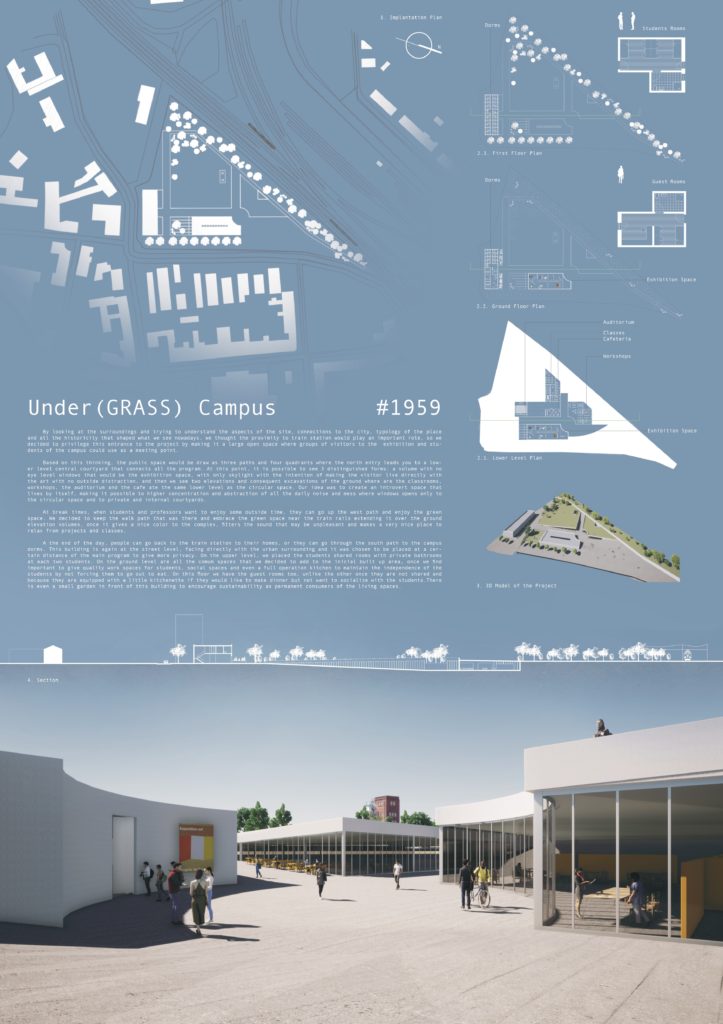 By looking at the surroundings and trying to understand the aspects of the site, connections to the city, typology of the place and all the historicity that shaped what we see nowadays, we thought the proximity to train station would play an important role, so we decided to privilege this entrance to the project by making it a large open space where groups of visitors to the  exhibition and students of the campus could use as a meeting point.

Based on this thinking, the public space would be draw as three paths and four quadrants where the north entry leads you to a lower level central courtyard that connects all the program. At this point, it is possible to see 3 distinguished forms: a volume with no eye level windows that would be the exhibition space, with only skylight with the intention of making the visitor live directly with the art with no outside distraction, and then we see two elevations and consequent excavations of the ground where are the classrooms, workshops, the auditorium and the cafe ate the same lower level as the circular space. Our idea was to create an introvert space that lives by itself, making it possible to higher concentration and abstraction of all the daily noise and mess where windows opens only to the circular space and to private and internal courtyards.

At break times, when students and professors want to enjoy some outside time, they can go up the west path and enjoy the green space. We decided to keep the walk path that was there and embrace the green space near the train rails extending it over the ground elevation volumes, once it gives a nice color to the complex, filters the sound that may be unpleasant and makes a very nice place to relax from projects and classes.

A the end of the day, people can go back to the train station to their homes, or they can go through the south path to the campus dorms. This building is again at the street level, facing directly with the urban surrounding and it was chosen to be placed at a certain distance of the main program to give more privacy. On the upper level, we placed the students shared rooms with private bathrooms at each two students. On the ground level are all the comum spaces that we decided to add to the inicial built up area, once we find important to give quality work spaces for students, social spaces and even a full operation kitchen to maintain the independence of the students by not forcing them to go out to eat. On this floor we have the guest rooms too, unlike the other once they are not shared and because they are equipped with a little kitchenette if they would like to make dinner but not want to socialize with the students.There is even a small garden in front of this building to encourage sustainability as permanent consumers of the living spaces. 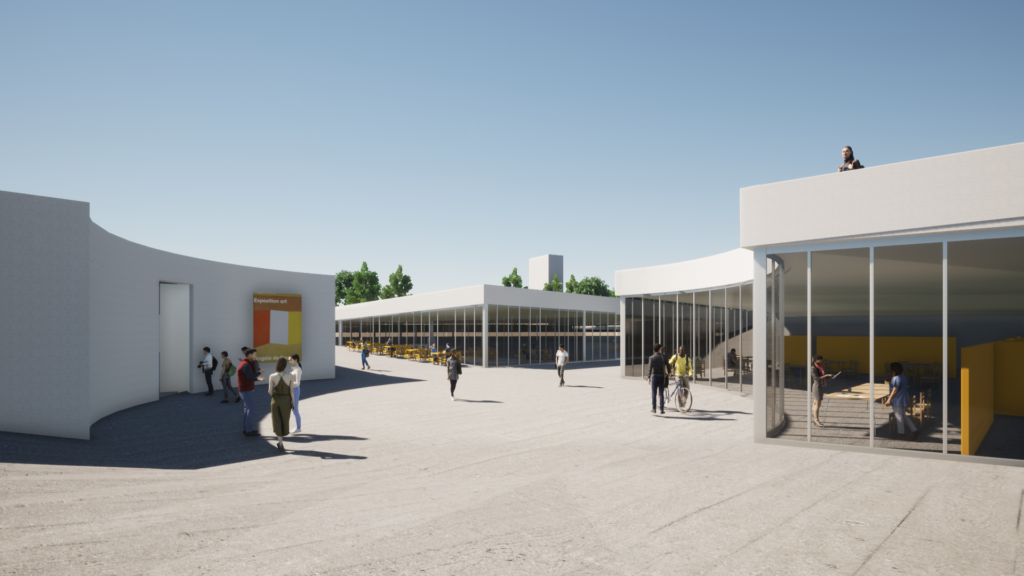 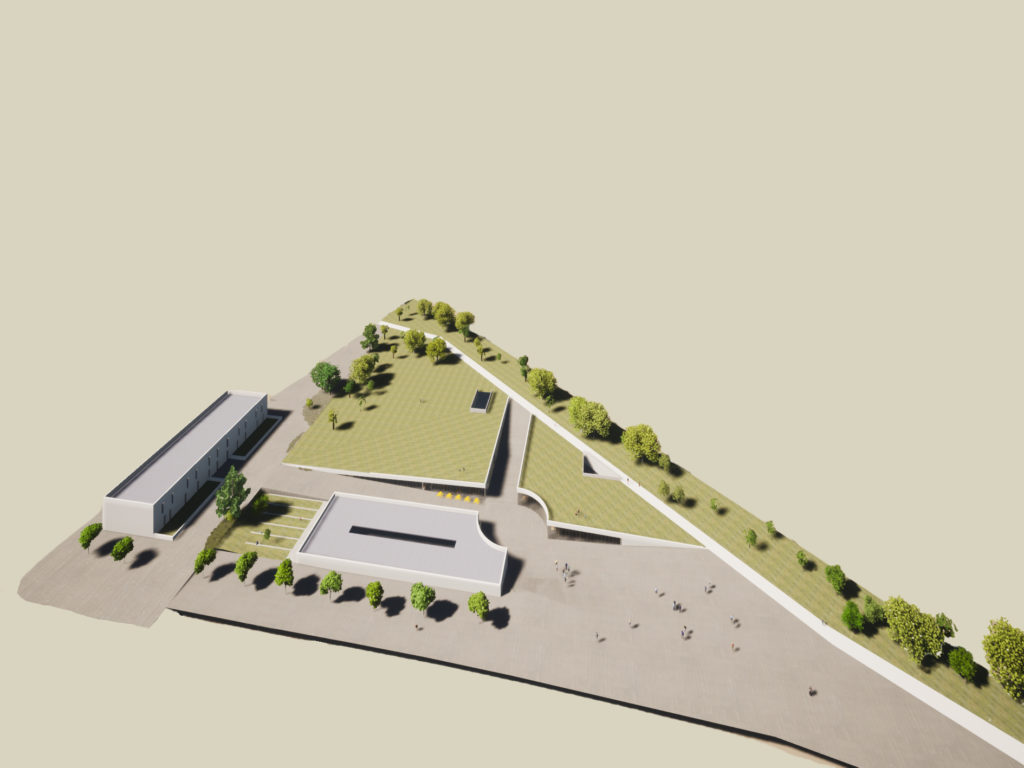 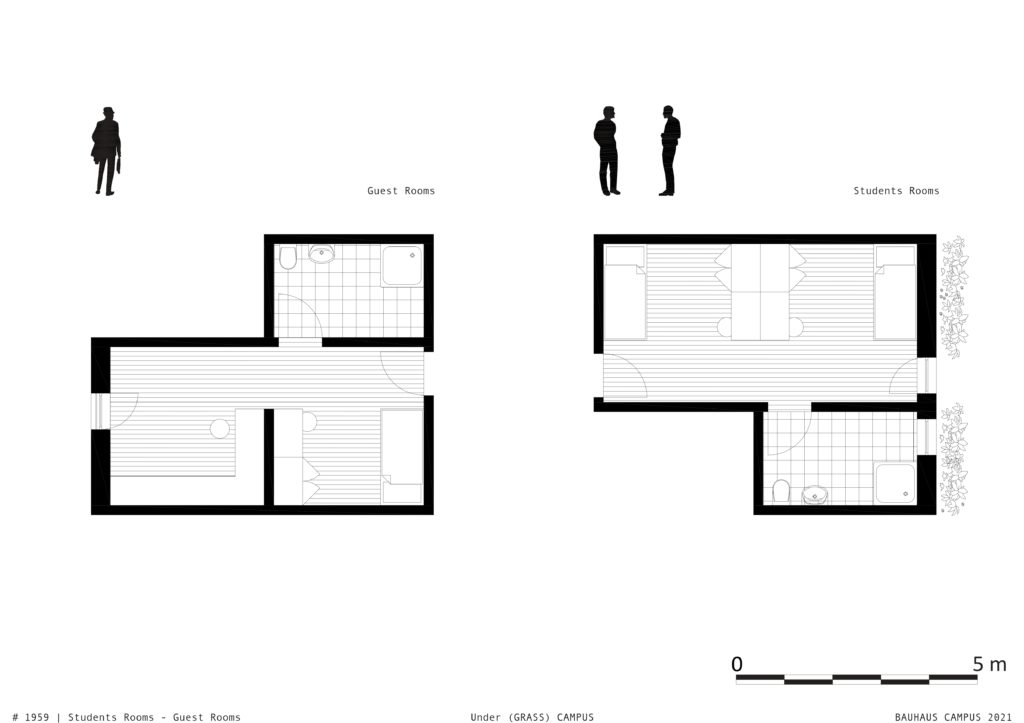 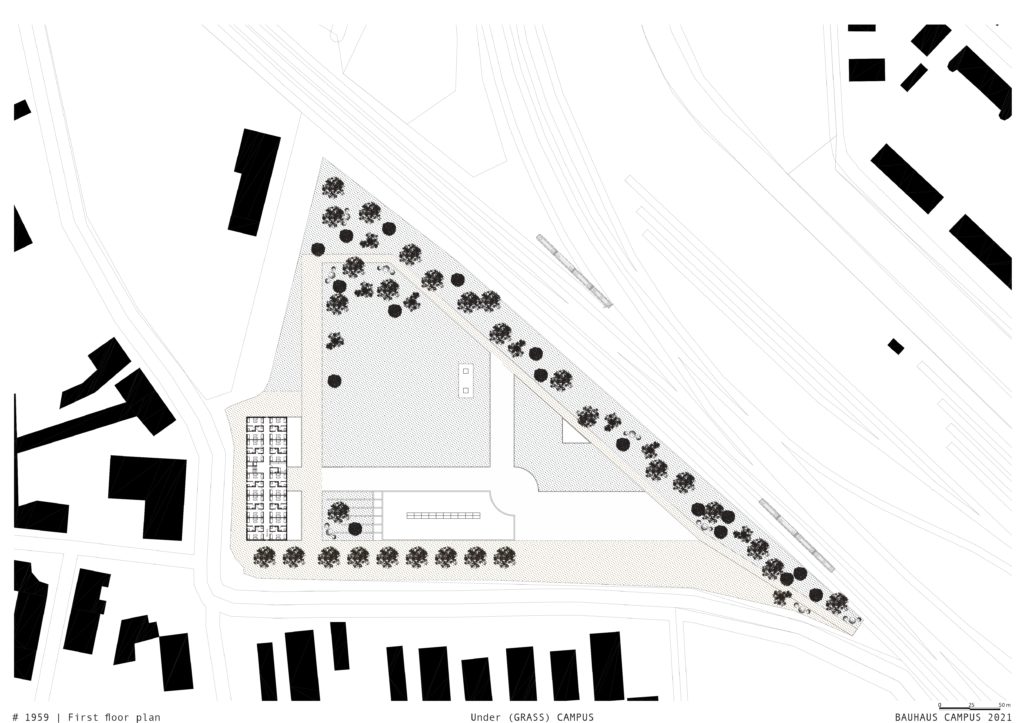 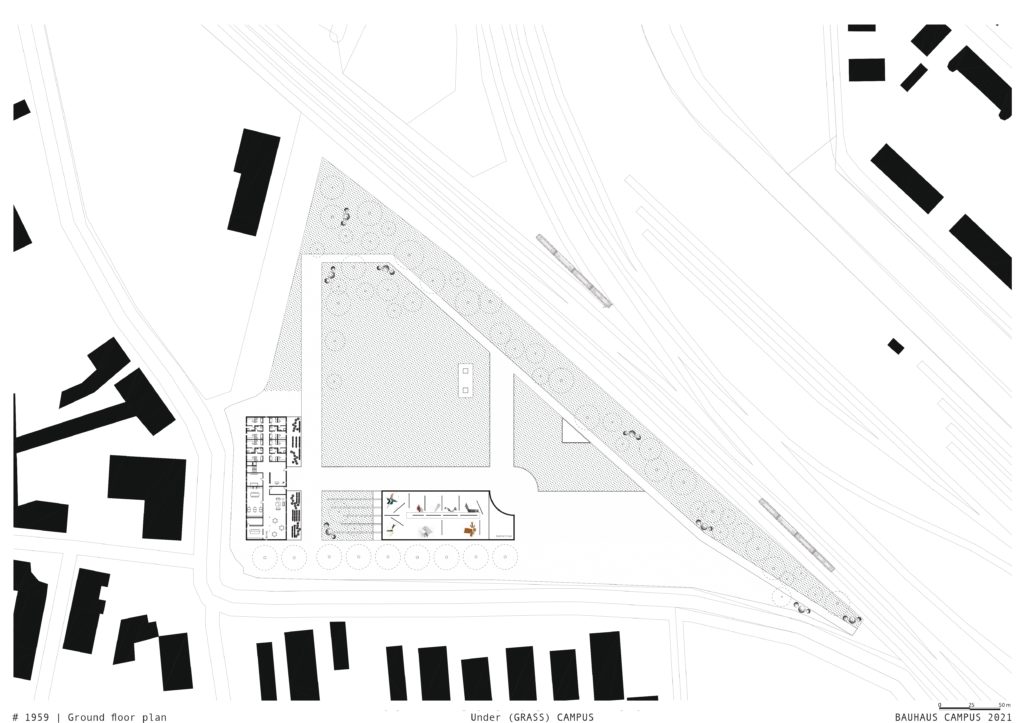 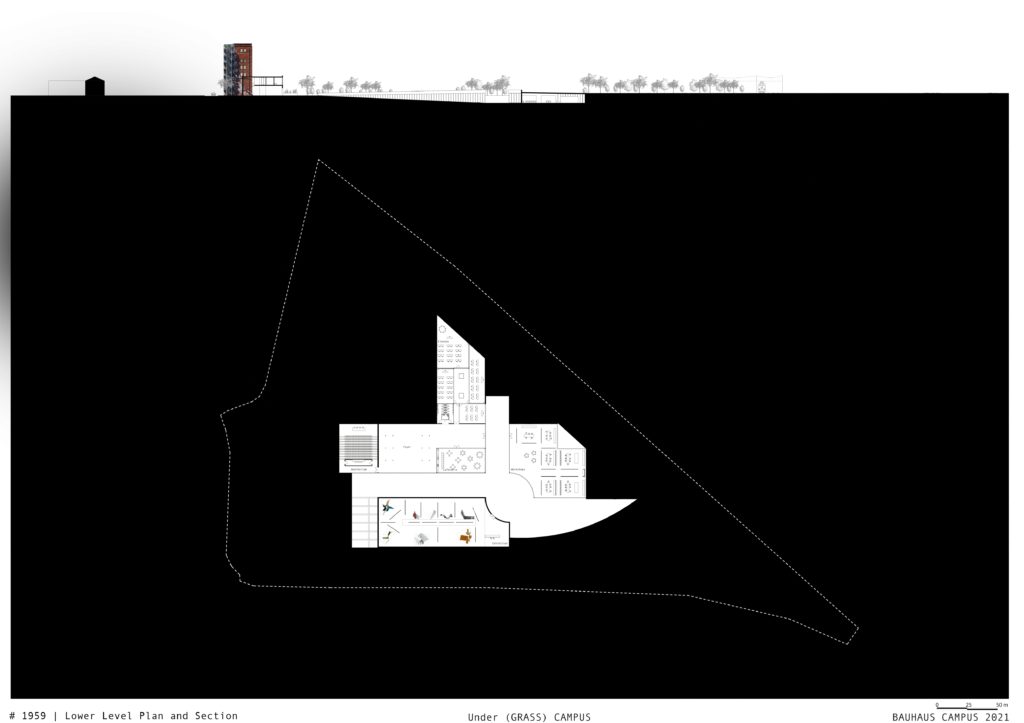 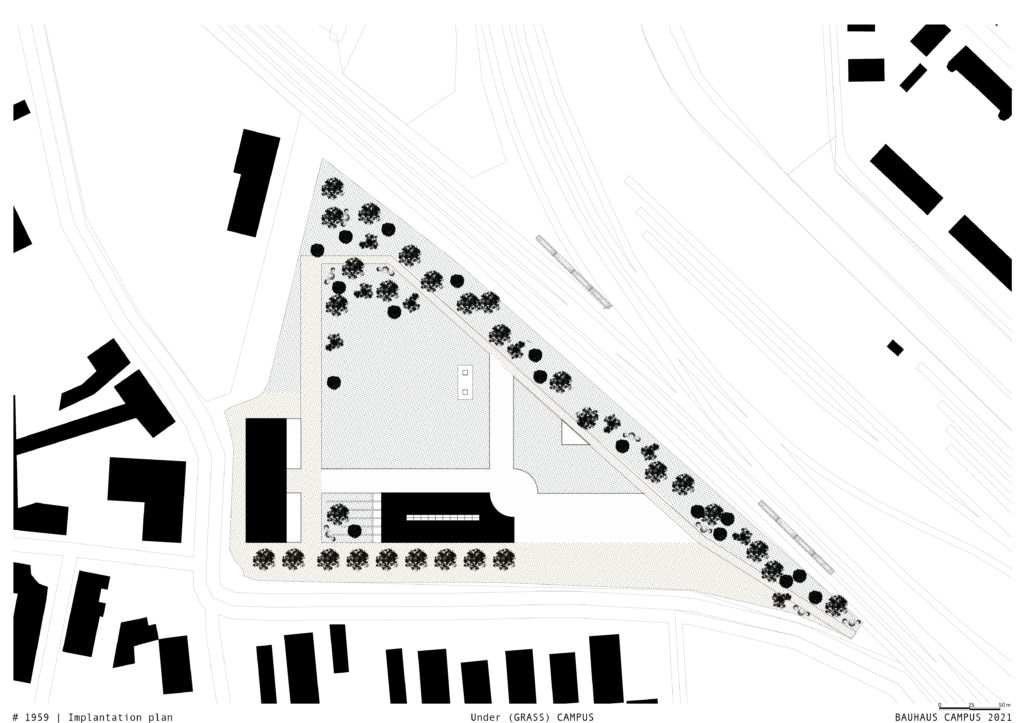