This project was selected as a Finalist by the jury of the Bauhaus Campus 2021 competition. Registration ID #1477 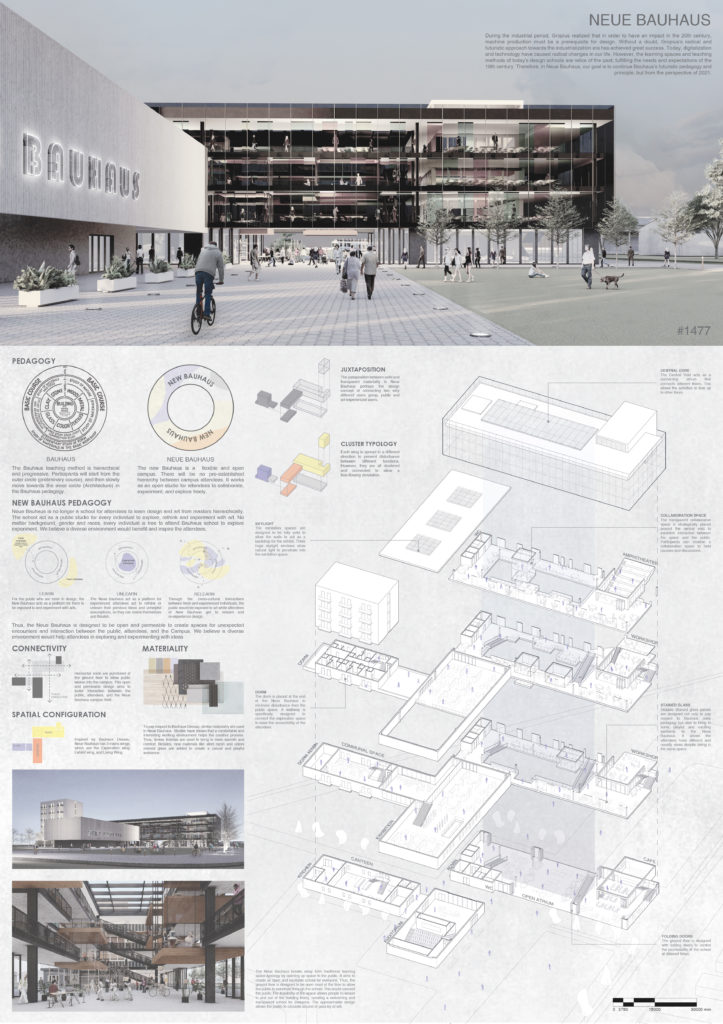 During the industrial period, Gropius realized that in order to have an impact in the 20th century, machine production must be a prerequisite for design. Without a doubt, Gropius’s radical and futuristic approach towards the industrialization era has achieved great success. Today, digitalization and technology have caused radical changes in our life. However, the learning spaces and teaching methods of today’s design schools are relics of the past; fulfilling the needs and expectations of the 19th century. Therefore, in Neue Bauhaus, our goal is to continue Bauhaus’s futuristic pedagogy and principle, but from the perspective of 2021.

The Bauhaus teaching method is hierarchical and progressive. Participants will start from the outer circle (preliminary course), and then slowly move towards the inner circle (Architecture) in the Bauhaus pedagogy.

The new Bauhaus is a flexible and open campus. There will be no pre-established hierarchy between campus attendees. It works as an open studio for attendees to collaborate, experiment, and explore freely.

Neue Bauhaus is no longer a school for attendees to learn design and art from masters hierarchically. The school act as a public studio for every individual to explore, rethink and experiment with art. No matter background, gender, and races, every individual are free to attend Bauhaus school to explore experiment. We believe a diverse environment would benefit and inspire the attendees.

For the public who are fresh in design, the New Bauhaus acts as a platform for them to be exposed to and experiment with arts.

The Neue Bauhaus act as a platform for experienced attendees act to rethink or unlearn their previous ideas and unhelpful assumptions, so they can rewire themselves and flourish.

Through the cross-cultural interactions between fresh and experienced individuals, the public would be exposed to art while attendees of New Bauhaus get to relearn and re-experience design.

Thus, the Neue Bauhaus is designed to be open and permeable to create spaces for unexpected encounters and interaction between the public, attendees, and the Campus. We believe a diverse environment would help attendees in exploring and experimenting with ideas

Horizontal voids are punctured at the ground floor to allow public weave into the campus. This open and permeable design aims to foster interaction between the public, attendees, and the Neue Bauhaus campus itself.

Inspired by Bauhaus Dessau, Neue Bauhaus has 3 mains wings, which are the Exploration wing, Exhibit wing, and Living Wing.

To pay respect to Bauhaus Dessau, similar materiality are used in Neue Bauhaus. Studies have shown that a comfortable and interesting working environment helps the creative process. Thus, timber finishes are used to bring in more warmth and comfort. Besides, new materials like steel mesh and colors stained glass are added to create a casual and playful ambiance.

Each wing is spread in a different direction to prevent disturbance between different functions. However, they are all clustered and connected to allow a free-flowing circulation.

The Central Void acts as a connecting atrium that connects different floors. This allows the activities to flow up to other floors.

The transparent collaborative space is strategically placed around the central void to establish interaction between the space and the public. Participants can reserve a collaboration space to hold courses and discussions.

Slidable Stained glass panels are designed not only to pay respect to Bauhaus color pedagogy but also to bring in some playful and exciting elements to the Neue Bauhaus. It allows the attendees have different and novelty views despite being in the same space.

The ground floor is designed with folding doors to control the permeability of the school at different times.

The dorm is placed at the end of the Neue Bauhaus to minimize disturbance from the public space. A walkway is specifically designed to connect the exploration space to ease the accessibility of the attendees.

The Neue Bauhaus breaks away from traditional learning space typology by opening up space to the public. It aims to create an open and equitable school for everyone. Thus, the ground floor is designed to be open most of the time to allow the public to penetrate through the school. This would connect the public The feasibility of the space allows people to weave in and out of the building freely, creating a welcoming and transparent school for everyone. The approachable design allows the public to circulate around or pass by at will. 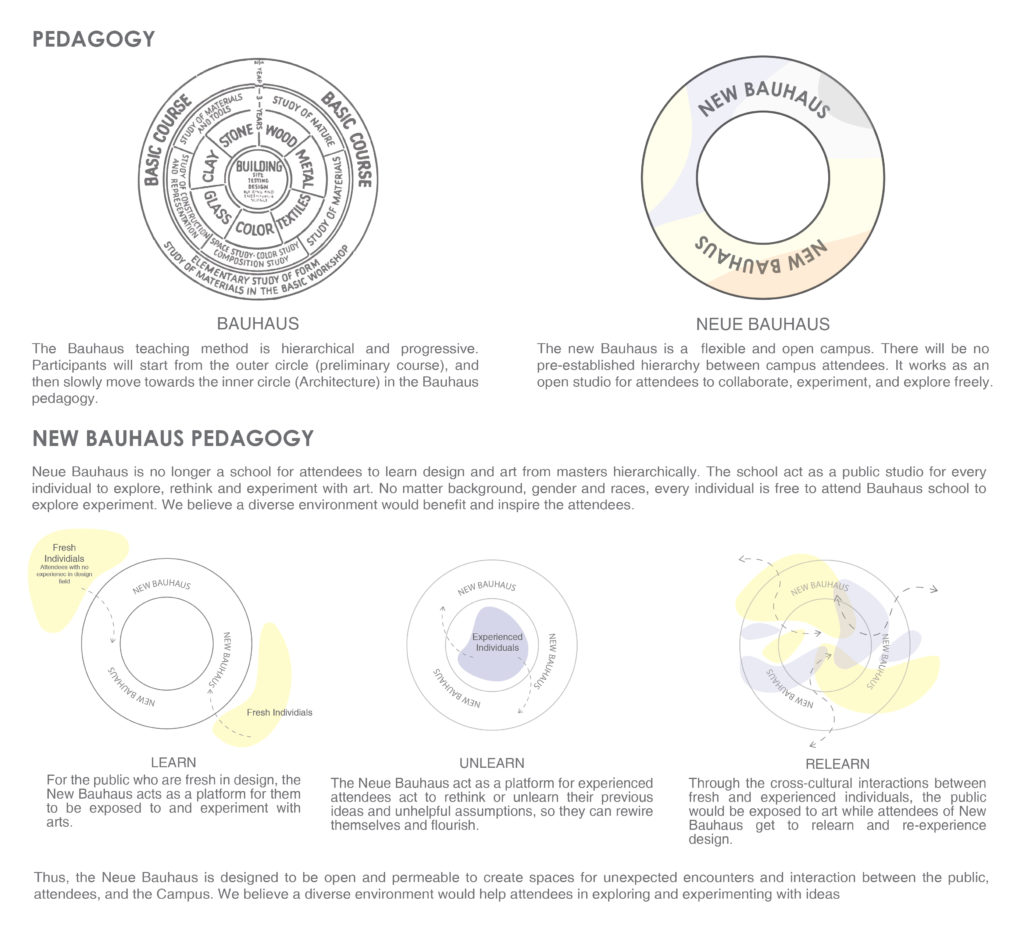 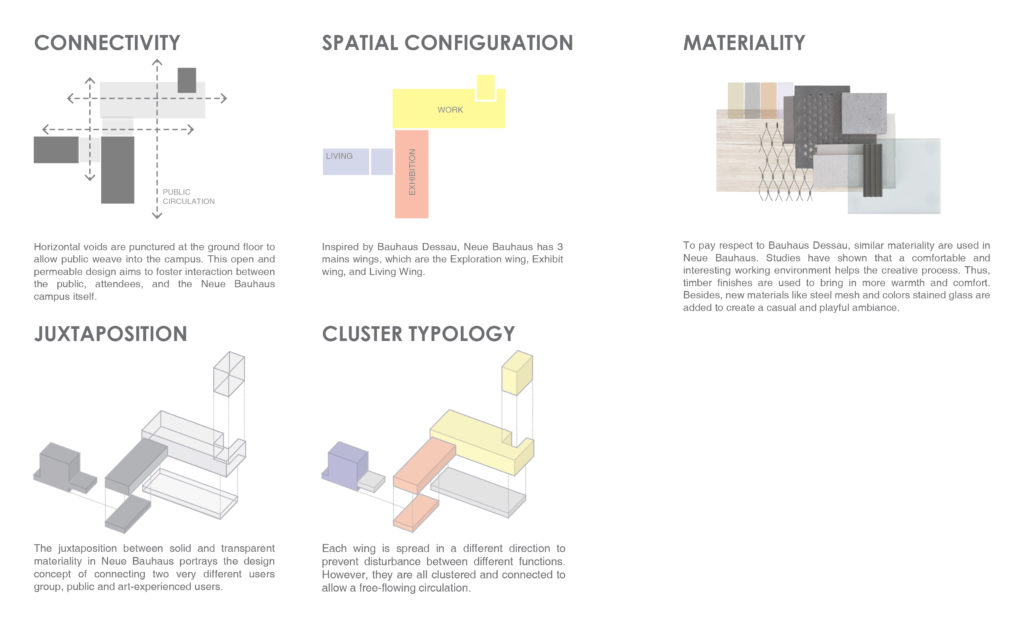 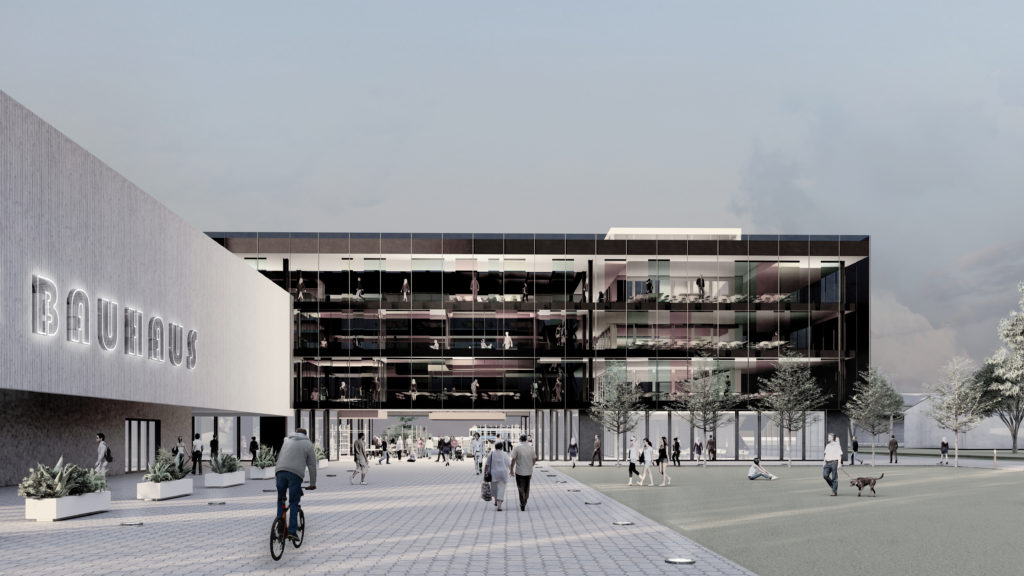 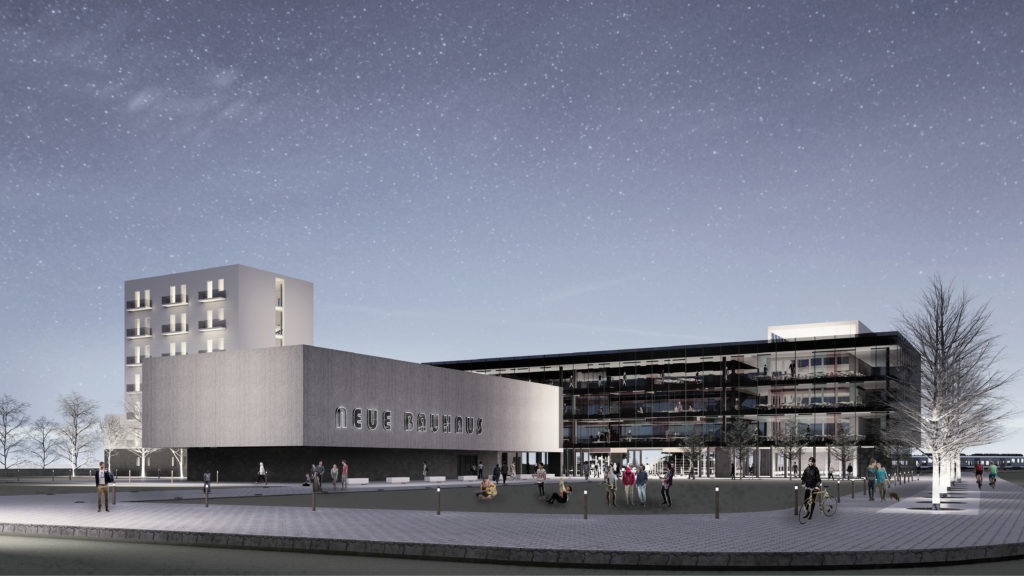 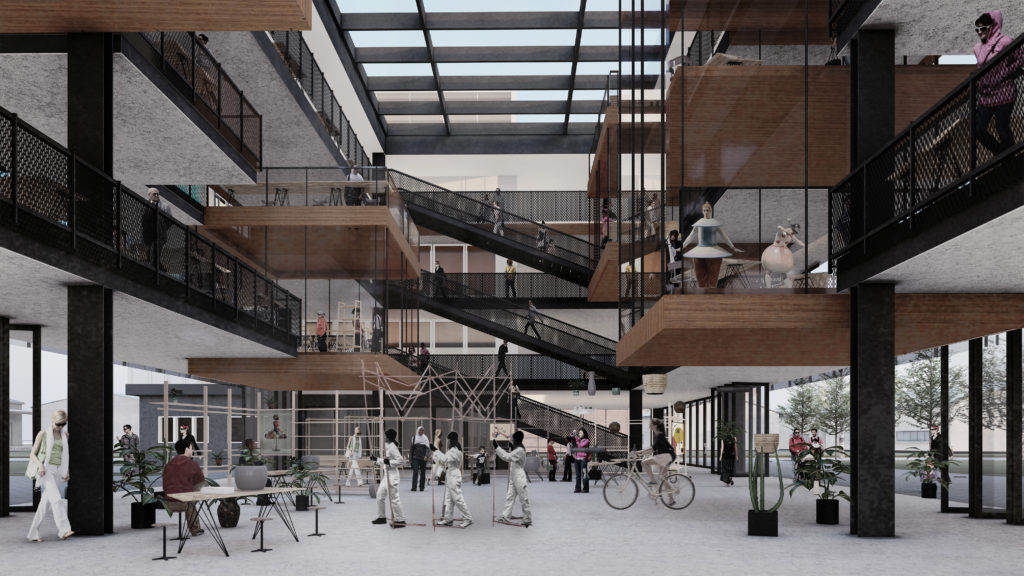 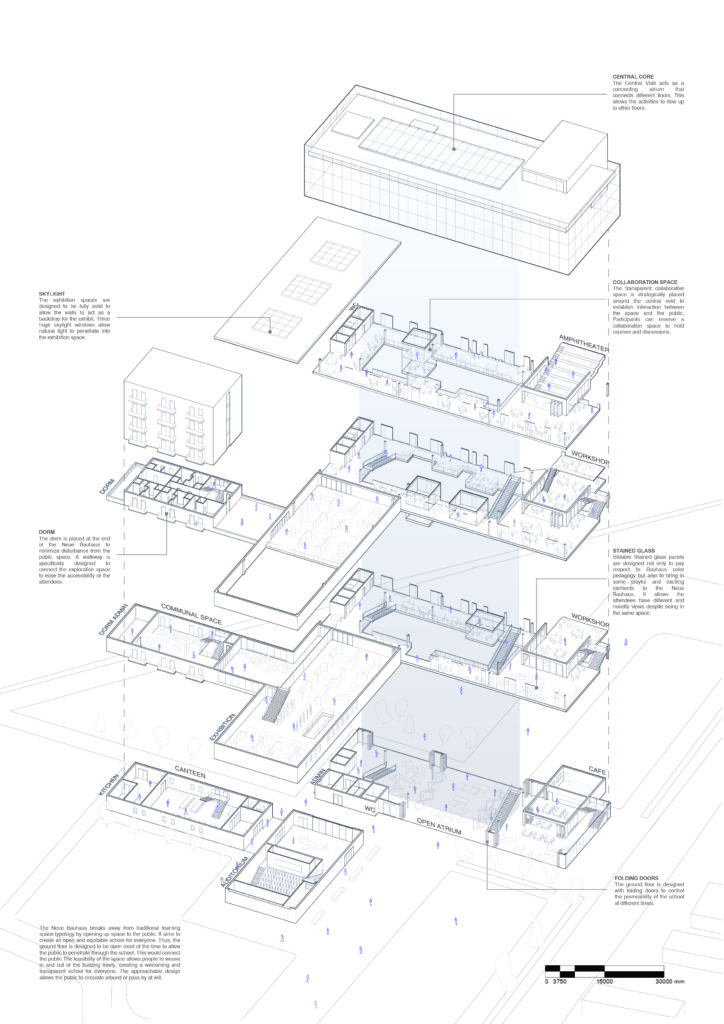